At the same time as it’s cracking down on the advertising businesses run by rivals, Apple is introducing a new way for developers to advertise on the App Store. Previously, developers could promote their apps after users initiated a search on the App Store by targeting specific keywords. For example, if you typed in “taxi,” you might then see an ad by Uber in the top slot above the search results. The new ad slot, however, will reach users before they search. This can expose the app to a wider audience.

This new and more prominent ad placement is found on the App Store’s Search tab, which sees millions of visits from Apple device owners every month. Today, the Search tab offers two sections below the search box itself: a “Discover” section that highlights current App Store trends, and a “Suggested” section with recommended apps and games to try. The ad will appear in the latter section at the top of the list of Suggested apps.

These new ad placements, which Apple calls “Search tab campaigns,” are being made available as part of Apple’s Search Ads Advanced service, and can take advantage of the assets that developers have already uploaded to their App Store product page — like the app’s name, icon and subtitle. Because developers are buying a direct placement on the App Store, they don’t need to submit keywords as they would for other App Store ads, nor any other creative assets. 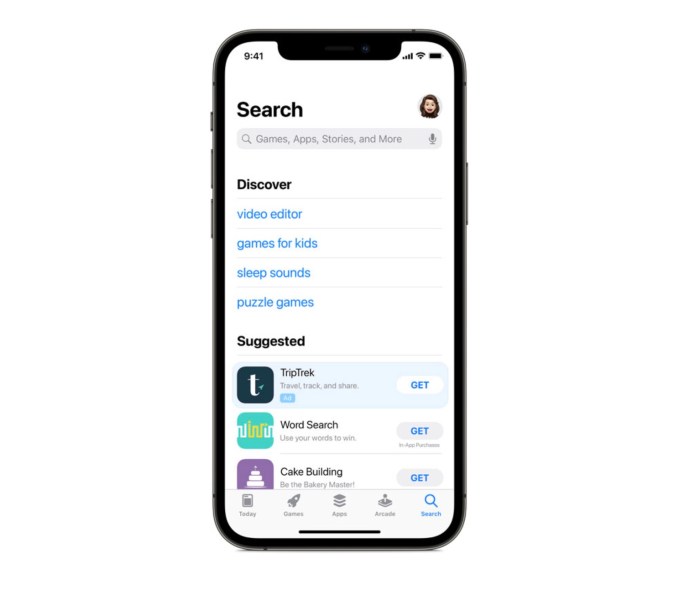 Like the existing Search results campaigns, there’s no minimum spend required for a Search tab campaign. Developers can spend as little or as much as they want, then start, stop or adjust the campaign at any time, says Apple. Ad pricing is based on a cost-per-thousand-impressions (CPM) model. The actual cost is the result of a second price auction, which calculates what the developer will pay based on what the next closest bidder is willing to pay. Impressions are counted when at least 50% of the ad is visible for one second, Apple notes.

Apple’s decision to expand its advertising business appears to be a calculated move timed with the launch of iOS 14.5, the latest version of the iPhone’s operating system. Through a feature called App Tracking Transparency (ATT), rolling out in iOS 14.5, Apple is cracking down on apps that track users’ data without permission. After updating, users will see a new pop-up box appear in each app, where the developer will ask permission to collect and share the user’s information with data brokers and other third parties, if they previously collected this information without users’ consent. Users can also go into their iOS Settings to turn on or off app tracking for individual apps at any time.

The change is shaking up the $350+ billion digital ad industry, led by Facebook and Google. Facebook has argued the impacts of the change will hurt small businesses, which have historically relied on highly targeted, personalized ads that allow them to reach potential customers without spending a lot of money. Advertisers, meanwhile, have suggested that Apple’s changes will benefit its own bottom line at the expense of their own.

But Apple’s response, to date, has simply been that the changes were necessary to protect consumer privacy. People should have a right to know “when their data is being collected and shared across other apps and websites,” the company said, “and they should have the choice to allow that or not.”

According to early data by Flurry Analytics, only around 11% of users are opting in to being tracked after the iOS 14.5 launch. For app publishers looking to acquire new users, that could make this new ad slot look more appealing than it would have, had it launched before ATT rolled out.

Apple’s plans to launch the new ad slot were reported by Financial Times in April, which noted that, ultimately, the changes may be more about money — they could also be about control. In years past, getting featured on the App Store could boost a company’s valuation as new users flooded in. Apple may want to shift that power away from third-parties and back to itself and its own App Store both in terms of app discovery and anointing the next hit apps.