The identity verification space has been heating up for a while and the COVID-19 pandemic has only accelerated demand with more people transacting online.

Persona, a startup focused on creating a personalized identity verification experience “for any use case,” aims to differentiate itself in an increasingly crowded space. And investors are banking on the San Francisco-based company’s ability to help businesses customize the identity verification process — and beyond — via its no-code platform in the form of a $50 million Series B funding round.

Index Ventures led the financing, which also included participation from existing backer Coatue Management. In late January 2020, Persona raised $17.5 million in a Series A round. The company declined to reveal at which valuation this latest round was raised.

Businesses and organizations can access Persona’s platform by way of an API, which lets them use a variety of documents, from government-issued IDs through to biometrics, to verify that customers are who they say they are. The company wants to make it easier for organizations to implement more watertight methods based on third-party documentation, real-time evaluation such as live selfie checks and AI to verify users.

Persona’s platform also collects passive signals such as a user’s device, location, and behavioral signals to provide a more holistic view of a user’s risk profile. It offers a low code and no code option depending on the needs of the customer.

The company’s momentum is reflected in its growth numbers. The startup’s revenue has surged by “more than 10 times” while its customer base has climbed by five times over the past year, according to co-founder and CEO Rick Song, who did not provide hard revenue numbers. Meanwhile, Persona’s headcount has more than tripled to just over 50 people.

“When we look back at the space five to 10 years ago, AI was the next differentiation and every identity verification company is doing AI and machine learning,” Song told TechCrunch. “We believe the next big differentiator is more about tailoring and personalizing the experience for individuals.”

As such, Song believes that growth can be directly tied to Persona’s ability to help companies with “unique” use cases with a SaaS platform that requires little to no code and not as much heavy lifting from their engineering teams. Its end goal, ultimately, is to help businesses deter fraud, stay compliant and build trust and safety while making it easier for them to customize the verification process to their needs. Customers span a variety of industries, and include Square, Robinhood, Sonder, Brex, Udemy, Gusto, BlockFi and AngelList, among others.

“The strategy your business needs for identity verification and management is going to be completely different if you’re a travel company verifying guests versus a delivery service onboarding new couriers versus a crypto company granting access to user funds,” Song added. “Even businesses within the same industry should tailor the identity verification experience to each customer if they want to stand out.” 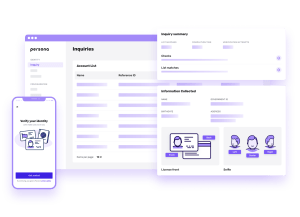 For Song, another thing that helps Persona stand out is its ability to help customers beyond the sign-on and verification process.

“We’ve built an identity infrastructure because we don’t just help businesses at a single point in time, but rather throughout the entire lifecycle of a relationship,” he told TechCrunch.

In fact, much of the company’s growth last year came in the form of existing customers finding new use cases within the platform in addition to new customers signing on, Song said.

“We’ve been watching existing customers discover more ways to use Persona. For example, we were working with some of our customer base on a single use case and now we might be working with them on 10 different problems — anywhere from account opening to a bad actor investigation to account recovery and anything in between,” he added. “So that has probably been the biggest driver of our growth.”

Index Ventures Partner Mark Goldberg, who is taking a seat on Persona’s board as part of the financing, said he was impressed by the number of companies in Index’s own portfolio that raved about Persona.

“We’ve had our antennas up for a long time in this space,” he told TechCrunch. “We started to see really rapid adoption of Persona within the Index portfolio and there was the sense of a very powerful and very user friendly tool, which hadn’t really existed in the category before.”

Its personalization capabilities and building block-based approach too, Goldberg said, makes it appealing to a broader pool of users.

“The reality is there’s so many ways to verify a user is who they say they are or not on the internet, and if you give people the flexibility to design the right path to get to a yes or no, you can just get to a much better outcome,” he said. “That was one of the things we heard — that the use cases were not like off the rack, and I think that has really resonated in a time where people want and expect the ability to customize.”

Persona plans to use its new capital to grow its team another twofold by year’s end to support its growth and continue scaling the business.

In recent months, other companies in the space that have raised big rounds include Socure and Sift.

Socure raises $100M at $1.3B valuation, proving identity verification is hotter than ever