If there has ever been a golden age for fintech, it surely must be now. As of Q1 2021, the number of fintech startups in the U.S. crossed 10,000 for the first time ever — well more than double that if you include EMEA and APAC. There are now three fintech companies worth more than $100 billion (Paypal, Square and Shopify) with another three in the $50 billion-$100 billion club (Stripe, Adyen and Coinbase).

Yet, as fintech companies have begun to go public, there has been a fair amount of uncertainty as to how these companies will be valued on the public markets. This is a result of fintechs being relatively new to the IPO scene compared to their consumer internet or enterprise software counterparts. In addition, fintechs employ a wide variety of business models: Some are transactional, others are recurring or have hybrid business models.

In addition, fintechs now have a multitude of options in terms of how they choose to go public. They can take the traditional IPO route, pursue a direct listing or merge with a SPAC. Given the multitude of variables at play, valuing these companies and then predicting public market performance is anything but straightforward.

It is important to note that fintech is a complex category with many different types of players, and not all fintech is created equal.

The fintech gold rush has arrived

For much of the past two decades, fintech as a category has been very quiet on the public markets. But that began to change considerably by the mid-2010s. Fintech had clearly arrived by 2015, with both Square and Shopify going public that year. Last year was a record one with eight fintech IPOs, and there has been no slowdown in 2021 — the first four months have already produced seven IPOs. By our estimates, there are more than 15 additional fintech companies that could IPO this year. The current record will almost certainly be shattered well before the end of the year. 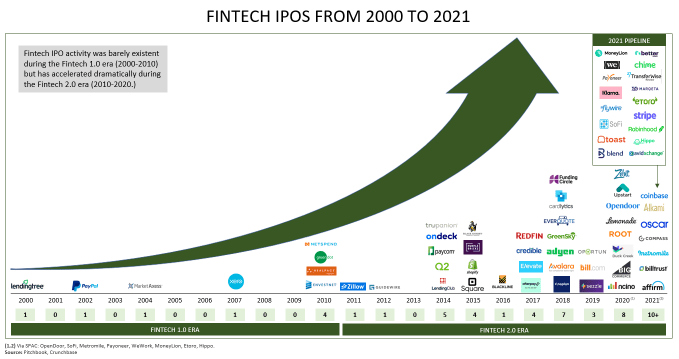