Returnal, released today for the PlayStation 5, is an action adventure that has you exploring an alien world that reconfigures itself whenever you die, bringing you back for another shot at escaping. It’s exciting, frustrating, and beautiful, though it isn’t particularly original. But while it is arguably the first game to be released that was designed and built for next generation consoles, it’s not the mainstream hit many gamers are waiting for.

First I should probably justify my “arguably.” The PS5 debuted with the impressive remake of Demon’s Souls, and while I enjoyed that greatly, it was only next-gen in its presentation; many dated aspects faithfully carried over from the original mean it can’t really be considered a fully next generation title. The pack-in Astro’s Playroom is a delight but doesn’t compare with full-scale games. Destruction All-Stars was something of a damp squib. And excellent games like Spider-Man: Miles Morales and Assassin’s Creed: Valhalla span the generations, playing best but by no means exclusively on PS5.

Demon’s Souls: The first truly next-gen game is a lopsided but impressive showcase

So Returnal really is, in a non-trivial way, the first really “next-gen” PS5 game — and it carries the “next-gen” PS5 price tag of $70, more in many regions. Can it justify this premium? In some ways yes, but like Demon’s Souls this is a difficult game that involves a potentially off-putting amount of repetition and failure for mainstream audiences.

The game starts with your character, a sci-fi space explorer working for a mysterious company called Astra (there are clear nods to Weyland-Yutani from Alien), crashing on a forbidden planet and finding herself — literally — stuck in a sort of time loop. (You’ll see what I mean by literally.) 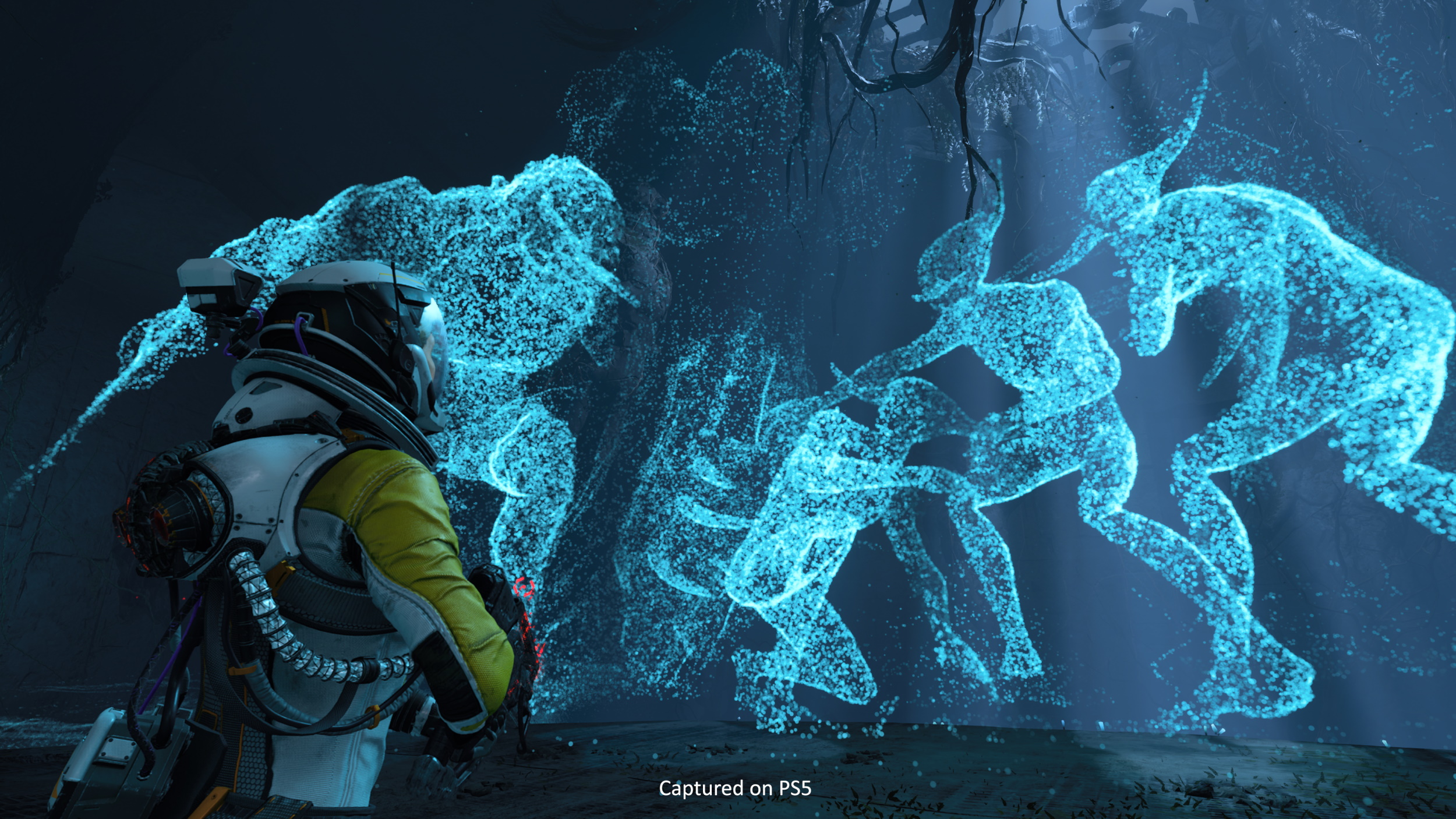 The developers have obviously seen Prometheus.

Without getting into the specifics of the plot, which is slowly revealed through found recordings, exploration of ancient ruins, and decoding alien symbols, Selene is seemingly trapped on the planet until she can figure out what’s going on, and whenever she dies the world shifts around to provide new challenges and opportunities.

Each loop or “cycle” involves the player starting from the crash site and progressing through the world, different but familiar every time. You encounter enemies, collect power-ups like new weapons or artifacts that affect your abilities, and occasionally an item that will permanently augment your suit or open new paths to take.

To call any individual aspect of the game original would be inaccurate — it takes with a free hand from its august predecessors in both gameplay and presentation. Without spoiling too much I’d say its progression and design share the most with indie breakout hit Dead Cells, with a dose of Risk of Rain 2, and a setting elaborating on Alien and Prometheus. That said, the story and backstory owe more to Solaris. It wears its influences on its sleeve to be sure, but they come together as something cohesive, not a sloppy pastiche. 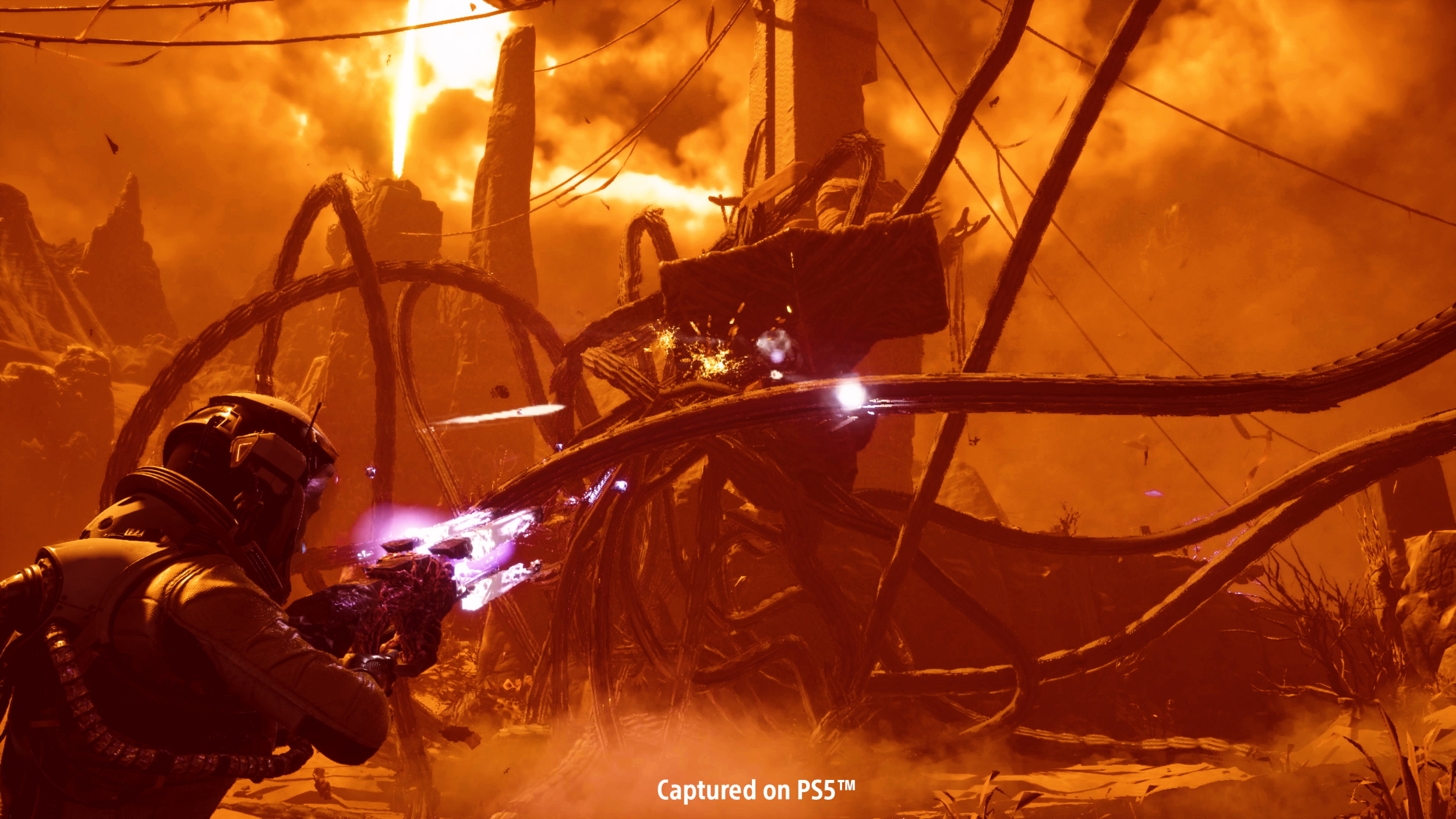 Returnal starts out almost frustratingly simple, but this is soon remedied as new abilities and layers of complexity are added to the mix; expect the “tutorial” to be meted out over a few hours as things are discovered organically.

You make your way through what amounts to arena after arena, sometimes large and multi-layered, sometimes confined, and fight whatever appears. Combat is frantic and high risk — monsters don’t telegraph ponderous swipes at you but rather spew dozens or hundreds of bullets in your direction, making you rely on smart anticipatory movement and the cluttered landscape to stay alive. As you defeat them you accrue increasingly powerful boons that only last until you get hit, at which point they all disappear, adding a layer of urgency to every encounter: you could gain a crucial edge for the next miniboss — or lose what you’ve built up over minutes of careful play. You can’t take any enemy lightly — those that don’t kill you will make you weaker.

The player moves forward by exploring and eventually defeating an area boss, encounters that are more than a little taxing and generally take a few tries. Then it’s on to a new, different “biome” to do it all again with a different color scheme (and new enemies, hazards and so on).

The look and feel of Returnal is what you might call “early next-gen.” It’s detailed, interesting looking and realistic in a sci-fi way, and it uses lighting and color well to create both a sense of place and gameplay objectives. It’s better in some ways than what you’d expect from a PS4 or Xbox One game but ultimately the advances here seem to be more on the side of “fewer limitations” rather than “new capabilities.” Load times are practically non-existent — a second or two at most — and in places where sightlines are farther than a room or two, the scale of what’s being drawn is impressive. The framerate is a steady 60, making combat fluid no matter how crowded and chaotic it gets.

As for the claim of a “living world” that’s truly different every time, you can pretty much ignore that. You’ll encounter the same rooms and structures repeatedly, maybe with different enemies or items, but don’t expect a wildly different experience every loop. Just enough that the repetition isn’t too repetitious. 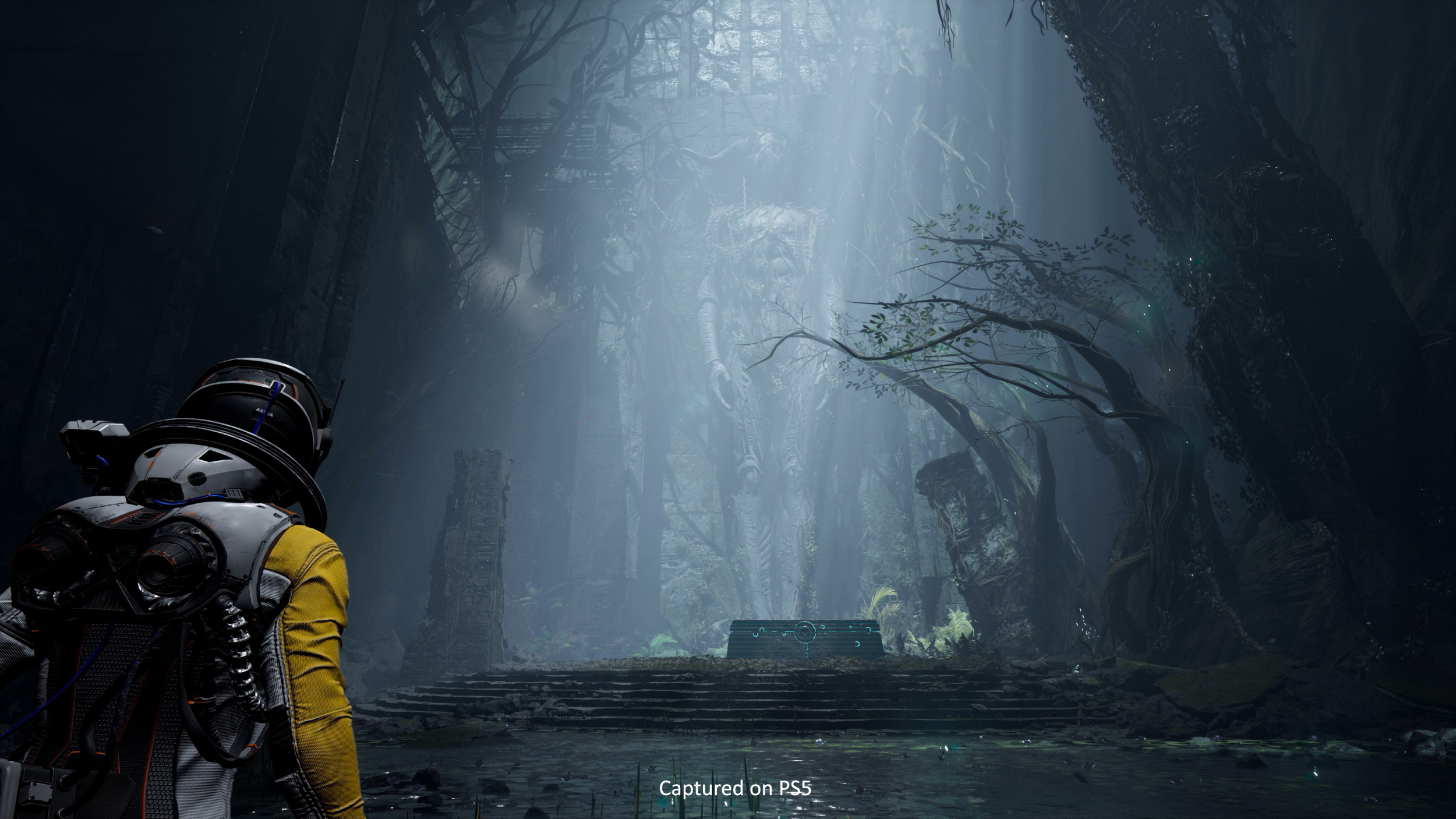 Sound is solid and I’d definitely recommend headphones. Your number one issue is going to be getting blasted in the back and positional audio will help a lot with that, as each enemy has characteristic noises for its actions.

The PS5 controller’s advanced haptics are put to good use with two-stage virtual triggers and a lot of contextual vibrations. I do wish there was a way to control these with a bit more granularity, as the constant patter of rain in the first area was numbing my hands, but the other haptic cues were useful and quickly became second nature.

Games in the “roguelite” (i.e. you start from scratch every life like a roguelike, but occasionally gain permanent upgrades) genre can fall flat if your progression, either within a loop or over many of them, involves little more than “+4% pistol damage” or a few more hit points. Fortunately Returnal is well aware of this and its weapons, artifacts, perks and so on often confer interesting bonuses or risk/reward mechanics. And you only have one weapon at a time, meaning the choice between, say, an assault rifle with special ability A and a shotgun with special ability B is a complex and risky one.

Eventually you’ll be able to skip past certain areas, but you may not want to, preferring to scour side paths for resources so you’re not going into the next boss room naked and afraid. In general the game manages to keep a lot of interesting tensions going on with the player that make every decision consequential, not to say agonizing.

Is Returnal worth its premium $70 asking price? For some people, yes. But this isn’t the kind of mainstream blockbuster that would ordinarily justify the increased cost.

So far I’ve played about 20 hours, done 30-odd runs, and based on what I know I’m about halfway through the game. Most of my progress was made on what I think of “prestige” runs, the handful where everything goes right and I get much further than before, making them tense and exciting. (Many ended within five minutes due to poor momentum or rage quits.) The game promises replay value past the credits, though, so a guess of 40 hours of content is more of a floor than a ceiling. 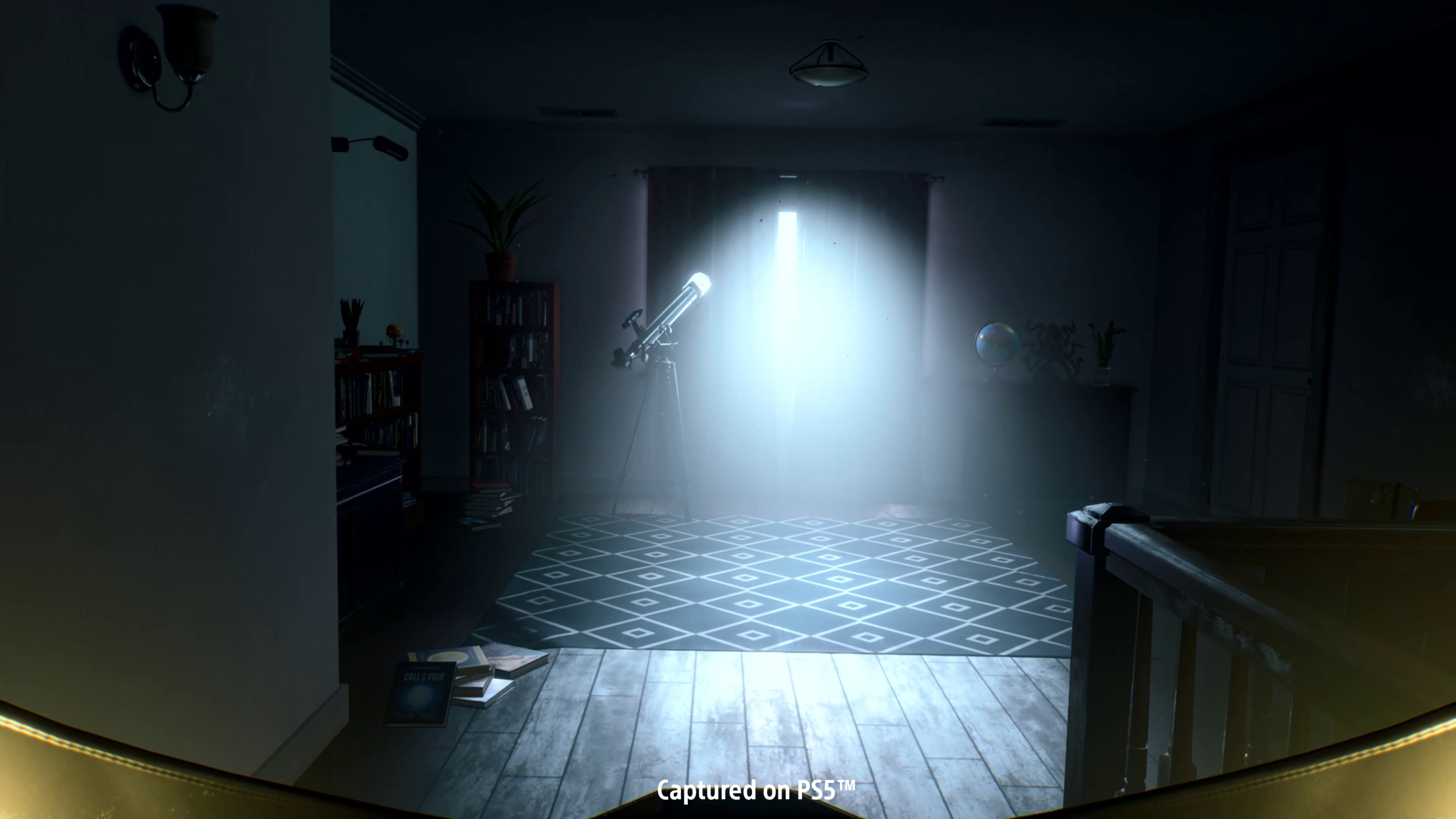 One of several trips to your house, inexplicably replicated on the alien planet…

The difficulty may present a barrier to many players. A dialogue at the start of the game warns you that the game is meant to be challenging and that death is part of the journey. Great, but that doesn’t make it any less frustrating when you get ambushed by a dozen enemies, wiping out half an hour of of progress in an instant. While generally the game falls into the “tough but fair” category, there are spikes here and there that feel gratuitous, and loops where you feel unlucky or underpowered and have to fight the urge to reset.

I don’t mind personally — compared to the Dark Souls series it’s a cakewalk. I almost beat the first boss on my first encounter; good luck doing that with Ornstein and Smough or Father Gascoigne! But like those games it takes a certain type of player to want to power through the early hours and access the huge amount of value essentially locked behind repeated failure. Similar to how many Demon’s Souls players never progress past that game’s punishing first area, players not ready for the acrobatics and perseverance necessary to traverse the unforgiving bullet hell of Returnal may never escape its gloomy, restrictive first biome for the bright, open second one or glimpse its intriguing backstory. (I’ve included some tips below to help people get through the first hours.)

Compared with the steady progression and traditional storytelling of something like AC: Valhalla or Miles Morales this may put off less masochistic gamers or prompt more than a few controller-throwing, refund-requesting moments. After all, paying $70 for a game that slaps you in the face while you try to access the latter $50 worth of it can be justifiably frustrating.

With all that said, it is nice to see a AAA next-generation game that isn’t a sequel or franchise, and seeing the “roguelite” formula embraced seriously beyond the indie world. Returnal may not be for everyone, but for the subset of gamers who have embraced this genre for years, it’s an easy one to recommend.

If you do decide to dive in, here are a handful of non-spoilery “wish I’d known that” tips to get you on the right track.