Indonesia is one of the fastest-growing consumer markets in the world, but consumer data is still hard to find for many businesses, especially smaller ones. Populix wants to make research easier for companies, through a respondent app that now has 250,000 users in 300 Indonesian cities. The startup announced today it has raised $1.2 million in an oversubscribed pre-Series A round led by returning investor Intudo Ventures, with participation from Quest Ventures.

Populix has now raised a total of $2.3 million since it was founded in January 2018, including a $1 million seed round also led by Intudo. The company’s revenue grew five times in 2020 and it signed up 52 new enterprise clients in 10 countries, as the COVID-19 pandemic limited traditional forms of consumer surveys, like in-person questionnaires. Its customers range in size from tech startups to multinational conglomerates.

The new capital will be used for product launches, marketing and hiring. Populix is currently in the process of launching a self-service product called Paket Hemat Populix (PHP) for clients like SMEs or university researchers that want to conduct their own surveys and monitor results in real time. 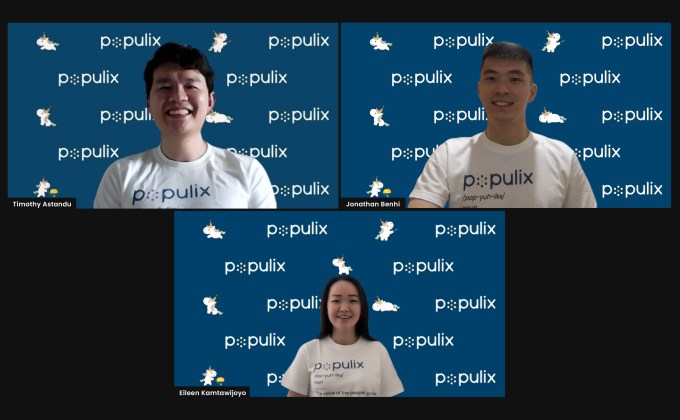 “When we were studying, we looked at developed markets, and in developed markets, consumer insights is such a big thing that all the brands are using it already,” said Astandu. “But it’s something that’s not available in developing countries like Indonesia,” where many companies still conduct research offline despite its very high smartphone engagement rates. For example, if a coffee brand wants to understand consumer sentiment, it will send people with surveys into a café or grocery store and ask customers to fill them out in return for a small gift.

“We felt it was important to do consumer sentiment in Indonesia, because it’s going to be a big market and Indonesia has seen very little innovation so far,” Astandu added. “That gives us a chance to disrupt it, in the sense that it has always catered to the big clients. It’s always the multinationals in Indonesia that buy it, but you are seeing an emerging middle class, a lot of SMEs and perhaps they actually need research and data more than big companies.”

After returning to Indonesia, Astandu and Kamtawijoyo began working on a more accurate and accessible alternative to traditional surveys, developing Populix while part of Gojek’s Xcelerate program. Then they met Benhi, who was previously an engineer at Discuss.io, a Seattle-based video platform for consumer research.

Populix’s clients conduct research through its respondent app, also called Populix, which keeps users engaged through daily polls, games and news, in return for incentives like cash offers or rebate programs. Populix can be customized for a wide range of research, ranging from short surveys to longitudinal studies that take place over a period of time, and is used to track brand health, prepare for product launches or gauge customer satisfaction. For example, a coffee brand used Populix to see how it was doing compared to competitors on a monthly basis and study consumer reactions before launching a ready-to-drink coffee. E-commerce companies have also used it to ask people where they shop online, what they look for and how they feel about the customer experience on different platforms.

“We can speed up the recruitment process, because we already have respondents available in our database for practically any kind of study,” said Kamtawijoyo.

Populix is currently developing new products to track market movements, using data collection tech like optical character recognition to scan invoices from major e-commerce platforms. It says its data classification system can recognize over 73% of all items on invoices.

Other companies in the same space include established players like YouGov and Kantar, and Singapore-based Milieu Insight, a market research and data platform that operates in several Southeast Asian countries. Astandu said one of the main ways Populix differentiates is by focusing on mobile surveys, since Indonesia is the fourth-largest smartphone market in the world (after China, India and the United States) and the penetration rate is still growing.

The founders said Populix will continue focusing on Indonesia with its pre-Series A funding, but plans to look at other developing markets with fragmented consumer data, like the Philippines and Vietnam, after raising its Series A round.

In a press statement, Intudo Ventures founding partner Patrick Yip said, “With consumer habits undergoing dramatic changes in recent years due to rising incomes and widespread embrace of digital commerce, Populix is providing clients with actionable insights into the latest consumption characteristics and trends of Indonesians. We are excited to double down on our support for Populix as it continues to roll out new technology-driven consumer insights products and solutions to meet the needs of clients both big and small.”