Weav, which is building a universal API for commerce platforms, is emerging from stealth today with $4.3 million in funding from a bevy of investors, and a partnership with Brex.

Founded last year by engineers Ambika Acharya, Avikam Agur and Nadav Lidor after participating in the W20 YC batch, Weav joins the wave of fintech infrastructure companies that aim to give fintechs and financial institutions a boost. Specifically, Weav’s embedded technology is designed to give these organizations access to “real time, user-permissioned” commerce data that they can use to create new financial products for small businesses.

Its products allow its customers to connect to multiple platforms with a single API that was developed specifically for the commerce platforms that businesses use to sell products and accept payments. Weav operates under the premise that allowing companies to build and embed new financial products creates new opportunities for e-commerce merchants, creators and other entrepreneurs. 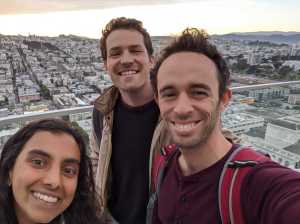 In a short amount of time, Weav has seen impressive traction. Recently, Brex launched Instant Payouts for Shopify sellers using the Weav API. It supports platform integrations such as Stripe, Square, Shopify and PayPal. (More on that later.) Since its API went live in January, “thousands” of businesses have used new products and services built on Weav’s infrastructure, according to Lidor. Its API call volume is growing 300% month over month, he said.

And, the startup has attracted the attention of a number of big-name investors, including institutions and the founders of prominent fintech companies. Foundation Capital led its $4.3 million seed round, which also included participation from Y Combinator, Abstract Ventures, Box Group, LocalGlobe, Operator Partners, Commerce Ventures and SV Angel.

Foundation Capital’s Angus Davis said his firm has been investing in fintech infrastructure for over a decade. And personally, before he became a VC, Davis was the founder and CEO of Upserve, a commerce software company. There, he says, he witnessed firsthand “the value of transactional data to enable new types of lending products.”

Foundation has a thesis around the type of embedded fintech that Weav has developed, according to Davis. And it sees a large market opportunity for a new class of financial applications to come to market built atop Weav’s platform.

“We were excited by Weav’s vision of a universal API for commerce platforms,” Davis wrote via email. “Much like Plaid and Envestnet brought universal APIs to banking for consumers, Weav enables a new class of B2B fintech applications for businesses.”

Weav says that by using its API, companies can prompt their business customers to “securely” connect their accounts with selling platforms, online marketplaces, subscription management systems and payment gateways. Once authenticated, Weav aggregates and standardizes sales, inventory and other account data across platforms and develops insights to power new products across a range of use cases, including lending and underwriting; financial planning and analysis; real-time financial services and business management tools.

For the last few years, there’s been a rise of API companies, as well as openness in the financial system that’s largely been focused on consumers, Lidor points out.

“For example, Plaid brings up very rich data about consumers, but when you think about businesses, oftentimes that data is still locked up in all kinds of systems,” he told TechCrunch. “We’re here to provide some of the building blocks and the access to data from everything that has to do with sales and revenue. And, we’re really excited about powering products that are meant to make the lives of small businesses and e-commerce, sellers and creators much easier and be able to get them access to financial products.”

In the case of Brex, Weav’s API allows the startup to essentially offer instant access to funds that otherwise would take a few days or a few weeks for businesses to access.

“Small businesses need access as quickly as possible to their revenue so that they can fund their operations,” Lidor said.

Brex co-CEO Henrique Dubugras said that Weav’s API gives the company the ability to offer real-time funding to more customers selling on more platforms, which saved the company “thousands of engineering hours” and accelerated its rollout timeline by months.

Clearly, the company liked what it saw, considering that its founders personally invested in Weav. Is Weav building the “Plaid for commerce”? Guess only time will tell.