Last week, when we reported that Snap paid $124 million for Fit Analytics, we also noted that, according to the SEC filing that disclosed the value of the acquisition, Snap made another deal in the same quarter for a smaller amount, $7.6 million. We’ve now learned what that acquisition was: Snap has confirmed to us that it has acquired Pixel8earth, a company developing 3D mapping technology, specifically based on crowdsourced data.

Pixel8earth is based out of Boulder, Colorado, and four employees from the startup are joining Snap to work on map product development. Specifically, they will be building out tools that will work with Snap’s location-based augmented reality experiences along the lines of the Local Lenses that Snapchat introduced last June at its annual Partner Summit developer event.

As we’ve reported previously, we’ve heard that this year’s Partner Summit is likely to see some launches related to Snap’s wider e-commerce strategy, and we now understand that it will also feature some news on the AR mapping front, too.

It’s not clear if Snap (or Snapchat) will keep Pixel8earth going, or if it will roll selected technology and further development into products like Snap Map, but given the price of the deal, it’s most likely more of a talent acquisition.

For the record, Pixel8earth — co-founded by Sean Gorman and Pramukta Kumar, two repeat founders and mapping PhDs — had built a platform where it encouraged people (dubbed “ambassadors”) to join the platform and use their 360 cameras and other cameras to record and contribute information to the startup’s global mapping database. (In that regard, the tech was not unlike what Mapillary, acquired by Facebook, had developed.) 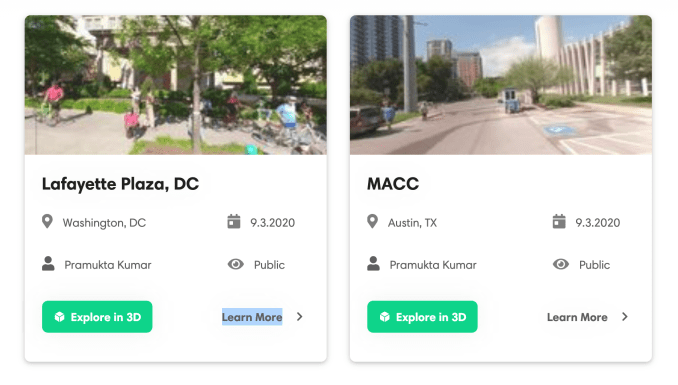 Snap has largely been building its mapping experiences around the idea of using maps to increase and improve engagement with its users. One of the bigger deals it’s made on that front was its acquisition in 2017 of Paris-based startup Zenly, an app that let you opt in to be able to be discovered by your friends on a map. Other mapping acquisitions have included StreetCred, announced in January of this year. StreetCred’s service was shut down after the deal, but it was also based around the idea of crowdsourcing points-of-interest and other mapping data, paying contributors in crypto tokens and putting the information “on the blockchain.”

Snap’s mapping efforts already have some decent traction and differentiation as a more “personalised” map — in contrast with, for example, the very much used Google Maps experience, which is about universal accuracy and being as thorough as possible, not exactly personalised (unless you are logged in and have locations saved, but even so, not with strong social features in mind).

At its investor day in February, Snap noted that Snap Map was used by more than 250 million Snapchatters monthly. “On other platforms, everyone sees the same Map. But on Snapchat we are building the world’s most personal Map,” Jacob Andreou, VP product, said. “Your Snap Map reflects your world; it features the people, places, and activities you care about, and no two are the same. The Map is built to see where your friends are and what they’re up to quickly and easily. This kind of sharing is at it’s best with close friends, a perfect fit for the best friends network that is unique to Snapchat. The version of the map in our app today is one that has been relentlessly improved in conversation with our community over the last two years leveraging this data-informed approach.”

While some of that usage and growth will have inevitably been curtailed in the last year, given the pandemic-enforced lockdowns and reduction in travel, Evan Spiegel, Snap’s CEO and co-founder, also said last week in its earnings that this might be turning a corner.

“We are optimistic about the engagement trends we are seeing as the world is beginning to open up,” he said. “As things began to open up in the United States in late February, we saw inflection points in key behaviors like Story posting and engagement with the Map.”

And while engagement is definitely something Snap has developed, it seems monetization might well be on the cards, too.

“Local, digital advertising is an established market – it has a playbook, and we’re confident that this will be an important part of our business in the future,” said Peter Sellis, senior director of product, at its recent investor day. “But we want to do it right.”

Filing: Snap paid $124M for Fit Analytics as it gears up for a bigger e-commerce push

The company has slowly been testing out some more commercial features like Promote Local Place to give smaller businesses, and specifically retailers, a boost, which was the first time Snap had put businesses on the Snap Map.

“We’re going to spend a lot of time expanding these products to work for the largest multi-location enterprises in 2021,” he continued, “but they were honestly reactive to the pandemic, and we feel that we have yet to truly build on the potential of the Map.”

It seems that Pixel8earth could be a sign of how Snap and its flagship app Snapchat plan to do that.