Numbers first: The company says there are now 2 billion people each month who watch videos that are eligible for in-stream ads. It also says that 70% of in-stream ads are watched to completion, with its studies showing that by adding a Facebook In-Stream campaign to ad purchases that already include News Feed and Stories, advertisers saw a median 1.5x increase in ad recall.

When discussing the news with Carolyn Everson, the vice president of Facebook’s global business group, I wondered whether traditional advertisers are comfortable with the company’s metrics. (Back in 2016, the company had to admit that due to an error, it had been inflating video view times, and is still facing criticism about how it handled the situation.)

Everson said Facebook is aiming to be “very specific” with its numbers. She also noted that the company only places in-stream ads in videos that are three minutes or longer, with the ad only playing after a viewer has watched at least 45 seconds (or more, depending on the video). 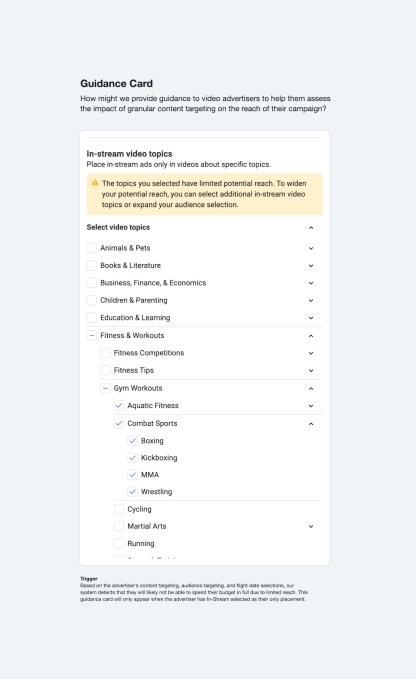 On the product side, the company is starting a global test of In-Stream Video Topics, which will allow advertisers to target their ads not just by audience, but also based on the topic of a given video. In a blog post, Facebook says the initial targeting will include “over 20 Video Topics, like Sports, and over 700 hundred sub-topics such as Baseball, Basketball, Golf, or Swimming.”

Everson said the company will use machine learning technology to classify eligible videos, as well as to ensure that they meet Facebook’s brand safety guidelines.

In addition, Facebook is announcing that it will start testing ads in its short-form Instagram Reels format, initially in India, Brazil, Germany and Australia. These ads can be up to 30 seconds long, and users can interact with them in the same ways they interact with organic Reels content (liking, sharing, skipping).

And Facebook is testing the sticker ads that it announced last month, which will allow brands to create custom stickers, which creators can then include in their Facebook Stories.

Looking at all the announcements together, Everson (who joined Facebook in 2011) said, “Frankly, for the last 10 years, I’ve been so excited for the moment where we are absolutely ready for prime time in our discussions of online video solutions for marketers. With our news that we are announcing today, we have more than arrived.”

Facebook is bringing ads to shorter videos and Stories