Move over Citi Bike, there’s a new docked, shared bike service in town — only this one is all electric. Next week, JOCO will be the first shared operator in New York City to launch a network of e-bike stations on private property for public use.

The service, powered by shared mobility platform Vulog, will start with 30 stations and 300 e-bikes located around Manhattan on Monday, expanding to 100 stations and 1,000 bikes by June. This is not the first new shared operator to hit the streets of New York this year. Last week, the city announced the winning companies of the e-scooter pilot in the Bronx. But while Bird, Lime and Veo are restricted to operating in a section of the Bronx, far from any Citi Bike territory, JOCO is under no such constraints.

The company’s bikes will initially be stationed at parking garages around the city, including at Icon Parking garages, the city’s largest parking operators, but the company says it hopes to expand to residential and commercial buildings in the near future. The company essentially pays landlords to provide this amenity, while absolving them from having to operate or maintain the e-bikes.

“What differentiates us from Citi Bike is, first of all, our bikes are 100% electric, 100% premium,” co-founder Jonathan “Johnny” Cohen from New York told TechCrunch. (The two co-founders are both named Jonathan Cohen — one is from New York, the other from London. JOCO…get it?). “You can reserve our bikes in advance, and as we’re on private property, there is hand sanitizer at our stations, the bikes aren’t getting rained on every night, they’re a bit cleaner and easier to access.” 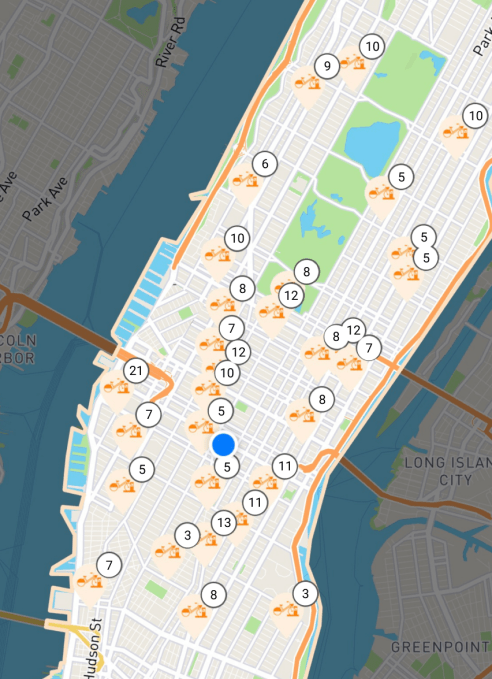 Citi Bike’s fleet is about 30% electric. To charge the e-bikes, the Lyft-owned company must manually take the drained vehicles from their stations to charge them, whereas JOCO’s vehicles are charged at the stations. Like Citi Bike, each e-bike can last for about 30 miles on a charge.

“That’s enough to get around Manhattan several times,” said London Jo (another moniker for differentiating between the two Cohens). “We expect our vehicles to always be charged and ready to go for the customer. It defeats the purpose when you’re taking a bike that’s extremely sustainable, and then come along in a gas-burning vehicle to swap the battery. We’re looking to be a truly environmentally friendly company and provide a more consistent and reliable service.”

Founded in 2019 and funded privately by a group of former CEOs of Fortune 500 companies, and specifically investors with technology and real estate backgrounds, JOCO offers e-bikes at a price point that’s comparable, if not directly competitive, to Citi Bike. It’ll cost riders $1 to unlock the bike and .25 cents a minute, so a 10 minute ride will come out to $3.50. If you can find an electric Citi Bike, it’ll cost a rider $3.50 to unlock and .18 cents a minute, which comes out to about $5.30.

Neither company charges unlock fees for members. JOCO’s monthly membership is $49 per month with unlimited use, and Citi Bike’s is $20 per month, with monthly members continuing to pay 18 cents per minute, and annual members paying 12 cents per minute. Under Citi Bike’s annual membership, if a rider is averaging out about five 10-minute rides per week, the monthly spend is comparable between the two companies.

“Citi Bike has been around since 2013 and has done a tremendous job at driving cycling adoption on the streets of NYC,” Monica Wejman, Vulog’s North America managing director, told TechCrunch. “And now you have JOCO entering this space, powered by Vulog, really there to complement Citi Bike and satisfy what we’re seeing as a significant increase in demand for access to e-bikes. We’re truly empowering mobility operators to launch mobility programs at scale.”

While JOCO will not be reliant on the NYC Department of Transportation to carve out street and sidewalk space for docking stations, the operator is still taking steps to ensure a good working relationship with the city. While the agency has told TechCrunch that all bike-sharing systems within NYC require prior written authorization from the DOT, a statement from JOCO’s counsel, Matthew W. Daus, said that is a “simple misunderstanding” that the company is “working on clearing up.”

“Our client, JOCO, had been in touch with the highest levels of NYC DOT early last fall, and again recently, to share with NYC DOT the concept of this purely private EV bike rental initiative – as an informational matter – to help promote sustainable goals in the city,” reads the statement. “This bike rental initiative is allowed under NY State law and exclusively uses private property – not city streets – for the rental transactions. No permits or approvals appear to be required from NYC DOT, and JOCO plans to launch early next week.”

London Jo says the city can also rest easy knowing that JOCO’s bikes are made with safety-critical features, like hidden cables to make them less susceptible to vandalism, puncture-proof airless tires and bike-tracking, provided by Vulog’s backend.

“In addition, by operating in private spaces, we’re eliminating that problem of sidewalk clutter for the city,” said the British Cohen. “And they don’t have to worry about what has to go to fit 50 new bikes on the street. We’re taking a big headache off them, and it’s allowing us to stay in control a little bit more and not have to depend on the city.”

This article has been updated to include information from the NYC DOT and JOCO around operation requirements.

Why micromobility may emerge from the pandemic stronger than before