Electric scooters powered by Gogoro’s swappable, rechargeable batteries now account for nearly a quarter of monthly sales in Taiwan, its home market. But one of the most frequent questions co-founder and chief executive officer Horace Luke gets asked is when will Gogoro launch its scooters in other countries.

Gogoro and Hero MotoCorp’s agreement includes a joint venture to build a battery-swapping network in India. Hero MotoCorp will also launch electric two-wheelers based on Gogoro technology under its own brand. This will mark the first time the company has launched electric vehicles. (The partnership is not to be confused with Hero Electric, which is run by relatives of Hero MotoCorp’s founders, but is a separate company.)

The deal will focus on India before expanding into Hero MotoCorp’s other markets (it serves a total of 40 countries). Details, like the first vehicle, launch cities and pricing, will be announced later, but Luke said Gogoro and Hero MotoCorp “are deploying very rapidly.”

Luke described the strategic partnership as a validation of Gogoro’s goal to become a battery-swapping and smart mobility platform, packaging its technology as a turnkey solution for companies that want to produce energy-efficient vehicles.

“We designed our technology, capabilities and business model in the hope that one day we can solicit a giant like Hero,” said Luke.

The first Gogoro Smartscooter was launched in 2015. Since then, it has struck partnerships with manufacturers like Yamaha, PGO and A-Motor to build electric scooters with its technology under their own brands, but Gogoro’s international rollout has been very gradual: for example, a delivery fleet in South Korea and a partnership with the now-defunct scooter-sharing service Coup in Europe. Its first product launch in the United States was for Eeyo, its electric bike brand, instead of scooters.

Gogoro and Hero MotoCorp have been talking for more than a year and Luke described the strategic partnership as one of the most important deals the company has made so far.

“In order to make a massive change, we need really massive adoption, and Taiwan has served really well as a pilot market for us to develop technology, refine it and show the world that it is possible, through this swap-and-go technology rather than tethered plug-and-charge scenario, for lightweight personal mobility to take off,” said Luke.

But India is obviously a much larger market, in terms of geography and population, than Taiwan. The Indian government wants to put more electric vehicles on the road with subsidy programs, and the high cost of fuel in the country is another incentive for people to make the switch from gas to electric. One major barrier for many consumers, however, is “range anxiety,” or concerns about how long their electric vehicle can run on a charge.

This is why Gogoro and Hero MotoCorp’s swapping station joint venture is important. In Taiwan, Gogoro now has more than 375,000 riders and 2,000 battery swapping/charging stations, which handle 265,000 swaps a day. That density is a key selling point because riders can find a nearby swapping station quickly through Gogoro’s smartphone app. 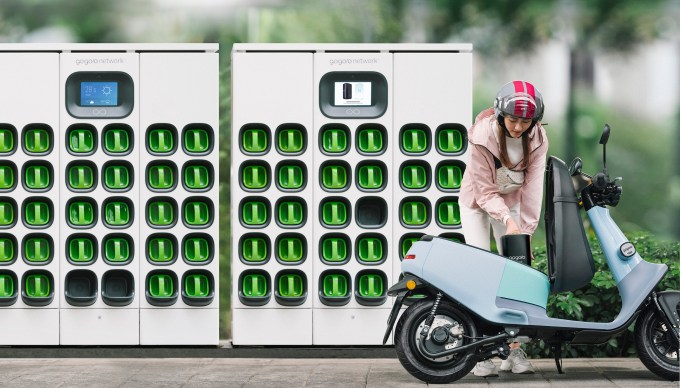 Gogoro’s batteries and charging stations are connected to its Gogoro Network cloud service, which monitors the condition of batteries and manages how quickly they are charged. This allows the batteries to last longer — Luke said the company has not retired any of its Smart Batteries in six years. Data from the Gogoro Network also shows the company where it needs to place more stations. In India, Gogoro and Hero MotoCorp will start with densely populated areas, before adding stations based on demand, similar to Gogoro’s approach to its network in Taiwan.

In a press statement, Hero MotoCorp chairman and CEO Dr. Pawan Munjal said the strategic partnership is an extension of the research and development already put into creating an electric vehicle portfolio.

“Today marks another major milestone in our journey, as we bring Hero’s leadership in two-wheelers, our global scale and innovation powerhouse, with the leadership of Gogoro in the swapping business model, as they have demonstrated over the years in Taiwan and the rest of the world,” Munjal added.