Figma spent years in stealth before launching its web-based collaborative design tool. Since coming into the light, the company has been iterating quickly. Today, Figma launches its biggest product update to date.

The entire concept of Figma stemmed from the fact that designers were taking up much more space at the figurative table and needed a place to collaborate efficiently. That is only more true today, especially during the last year of working from home, which is why Figma is extending itself throughout the workflow of designers with whiteboarding.

FigJam functionality includes sticky notes, emojis and drawing tools, as well as shapes, pre-built lines and connectors, stamps and cursor chats. As expected, FigJam works with Figma so components or other design objects breathed into life on FigJam can easily be moved into Figma.

“Our point of view here was focusing on how to make FigJam work as the first step in the design process, before you go into actually doing design work,” said Figma founder and CEO Dylan Field. “We see people looking for a better, more fluid experience, but we also wanted to make it simple enough to bring other people into the tool.”

To take that a step further, Figma is also introducing voice chat into all of its products. That means users who are designing alongside one another in Figma or brainstorming in FigJam don’t need to hop into a separate Zoom call or Google Meet, but can just toggle on chat in Figma to use audio.

Figma didn’t build its voice chat from scratch, but rather worked with a partner to bring this to market. Figma did not specify which partner/tech it’s working with on voice chat.

Alongside the release of FigJam and voice chat, Figma is also releasing a more full-featured mobile app, which will be in beta through TestFlight at launch. 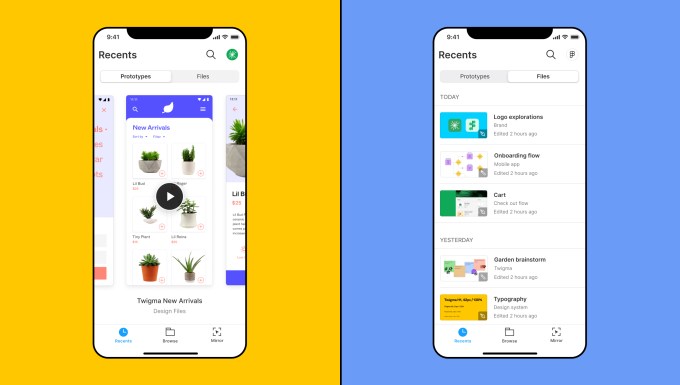 One final update that Figma is announcing today is branching and merging in Figma. This allows designers who are updating the design system, for example, to branch out and do their work and then merge that work with the existing design system, rather than updating a shared component or resource and affecting everyone else’s workflow.