Pulumi was one of the first of what is now a growing number of infrastructure-as-code startups and today, at its developer conference, the company is launching version 3.0 of its cloud engineering platform. With 70 new features and about 1,000 improvements since version 2.0, this is Pulumi’s biggest release yet.

The new release includes features that range from support for Google Cloud as an infrastructure provider (now in preview) to a new Automation API that turns Pulumi into a library that can then be called from other applications. It basically allows developers to write tools that, for example, can then provision and configure their own infrastructure for each customer of a SaaS application, for example. 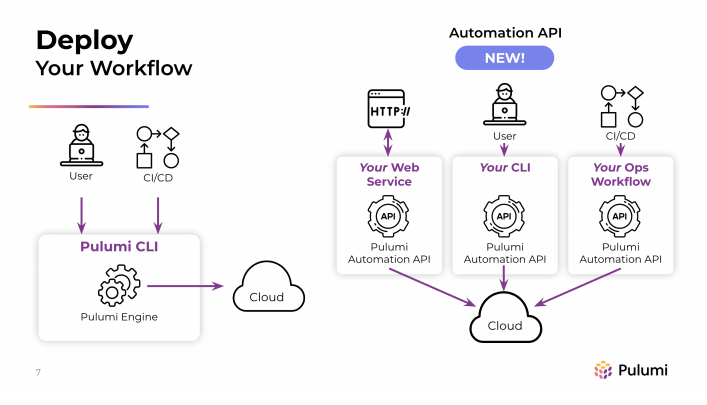 The company is also launching Pulumi Packages and Components for creating opinionated infrastructure building blocks that developers can then call up from their preferred languages.

Also new is support for Pulumi’s CI/CD Assistant across all the company’s paid plans. This feature makes it easier to deploy cloud infrastructure and applications through more than a dozen popular CI/CD platforms, including the likes of AWS Code Service, Azure DevOps, CircleCI, GitLab CI, Google Cloud Build, Jenkins, Travis CI and Spinnaker. Until now, you needed to be on a Team Pro or Enterprise plan to use this, but it’s now available to all paying users.

In addition, the company is expanding some of its enterprise features with, for example, SAML SSO, SCIm synchronization and new role types.

“When we started out on Pulumi, we knew we wanted to enable developers and infrastructure teams to collaborate more closely to build more innovative software,” said Joe Duffy, Pulumi co-founder and CEO. “What we didn’t know yet is that we’d end up calling this ‘Cloud Engineering,’ that our customers would call it that too, and that they would go on this journey with us. We are now centering our entire platform around this core idea which is now accelerating as the modern cloud continues to disrupt entire business models. Pulumi 3.0 is an exciting milestone in realizing this vision of the future — democratizing access to the cloud and helping teams build better software together — with much more to come.”