Casa Blanca, which aims to develop a “Bumble-like app” for finding a home, has raised $2.6 million in seed funding.

Co-founder and CEO Hannah Bomze got her real estate license at the age of 18 and worked at Compass and Douglas Elliman Real Estate before launching Casa Blanca last year.

She launched the app last October with the goal of matching home buyers and renters with homes using an in-app matchmaking algorithm combined with “expert agents.” Buyers get up to 1% of home purchases back at closing. Similar to dating apps, Casa Blanca’s app is powered by a simple swipe left or right.

Samuel Ben-Avraham, a partner and early investor of Kith and an early investor in WeWork, led the round for Casa Blanca, bringing its total raise to date to $4.1 million.

The New York-based startup recently launched in the Colorado market and has seen some impressive traction in a short amount of time.

Since launching the app in October, Casa Blanca has “made more than $100M in sales” and is projected to reach $280 million this year between New York and its Denver launch.

Bomze said the app experience will be customized for each city with the goal of creating a personalized experience for each user. Casa Blanca claims to streamline and sort listings based on user preferences and lifestyle priorities. 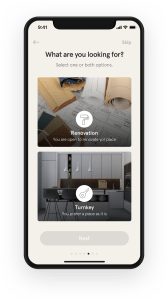 “People love that there is one place to book, manage feedback, schedule and communicate with a branded agent for one cohesive experience,” Bomze said. “We have a breadth of users from first time buyers to people using our platform for $15 million listings.”

Unlike competitors, Casa Blanca applies a direct-to-consumer model, she pointed out.

“While our agents are an integral part of the company, they are not responsible for bringing in business and have more organizational support, which allows them to focus on the individual more and creates a better end-to-end experience for the consumer,” Bomze said.

Casa Blanca currently has over 38 agents in NYC and Colorado, compared to about 15 at this time last year.

“We are in a growth phase and finding a unique opportunity in this climate, in particular, because there are many women exploring new, more flexible job opportunities,” Bomze noted.

The company plans to use its new capital to continue expanding into new markets, nationally and globally; as well as enhancing its technology and scaling.

“As we continue to grow in new markets, the app experience will be curated to each city — for example, in Colorado you can edit your preferences based on access to ski areas — to make sure we’re offering a personalized experience for each user,” Bomze said.