HomeX, a home services platform for homeowners and service providers, has raised $90 million in a funding round led by New Mountain Capital.

New Mountain Capital, a New York-based investment firm with more than $30 billion in assets under management, was the only institutional investor to put money in this round alongside company executives. The company was bootstrapped until a 2019 $50 million-plus debt financing.

Founded in 2017, Chicago-based HomeX aims to “radically improve” home services by pairing service workers with homeowners, both virtually and in person. It also has built software, and offers services for, contractors that are aimed at helping them drive and manage demand “more efficiently.”

Notably, one of the company’s co-founders, CTO Simon Weaver, and several team members were on the development team of Evi, a startup that had built an AI program that can be communicated with using natural language via an app, that was acquired by Amazon in 2012. That technology was essentially the brain behind Amazon’s virtual assistant Alexa.

HomeX uses artificial intelligence to diagnose home issues virtually before a contractor even goes out to a home, with the goal of helping them resolve a problem faster (by having the necessary equipment ahead of time for example), which in turn makes customers happier.

“We’re using machine-generated content to create solutions that are specific to a homeowner’s issues,” said  co-founder and president Vincent Payen. “Using machines to understand symptoms, the questions to ask and to actually get to a diagnosis and a recommendation or resolution is where AI absolutely shines and allows us to do things that were not possible even three or five years ago.”

How to choose and deploy industry-specific AI models

Founder and CEO Michael Werner worked in the $500 billion services industry for years (his family founded Werner Ladders) and recognized just how fragmented it was. He also acknowledges that, especially in certain markets, “there’s a terrible imbalance between very high demand and not enough contractors to do the work, or rather, a terrible labor shortage.”

HomeX Remote Assist in particular virtually connects homeowners (via phone, video or chat) with HomeX’s licensed technicians to diagnose and repair common home issues. That business unit has experienced more than 400% growth in less than a year, according to Werner. Last year, the company grew by “about 5x” the number of contractors on its platform. It declined to reveal revenue figures. 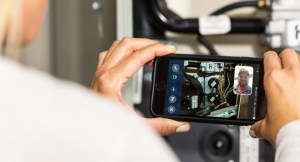 “For homeowners, we’re making home maintenance less complicated,” Werner said. “At the same time, we want to help the contractor succeed. Similar to how telemedicine has changed how medicine is delivered, HomeX Remote Assist is going to change the service experience for taking care of your home.”

Another area of HomeX’s business that is growing rapidly is its B2B offering. Home warranty and insurance companies see remote services “as very additive to make their business more efficient,” notes Payen.

“We are using some of our capital toward a pilot program and a number of business development opportunities there,” he said.

For now, while the company is not profitable overall, it is profitable in the services side of its business, according to Werner. In the last 12 months alone, it has served “hundreds of thousands” of clients via its platform, defined by unique virtual and physical appointments.

New Mountain Capital Managing Director Harris Kealey said his firm viewed HomeX as a business that is primed to reshape the home and commercial services industry.

“The market is massive and the need for change and innovation is substantial,” he said in a written statement.

Another company in the space, Thumbtack, recently expanded into video home checkups. Thumbtack, a marketplace where you can hire local professionals for home improvement and other services such as repairs, in December acquired Setter, a startup which provided its customers with video home checkups conducted by experts, and then offered personalized plans for how to address any issues.

Thumbtack had laid off 250 employees at the end of March 2020, after the company saw big declines in its major markets. Since then, however, CEO Marco Zappacosta told TechCrunch there’s been “a renewed focus on the home and an acceleration of digital adoption.”