Spotify this morning officially announced the limited U.S. release of its first hardware device, the oddly named Car Thing, aimed at Spotify Premium subscribers. The new device — which Spotify is surprisingly offering for free plus shipping — has evolved substantially from the version that first began testing in 2019. This upgraded model has a touchscreen, a big, grippable knob for navigation, voice control features and four preset buttons at the top for favorite music, podcasts or playlists, similar to Spotify on mobile devices.

The company explained its interest in Car Thing is about solving a need for customers who want a “more seamless” and personalized in-car listening experience. Although many cars today support Apple CarPlay or Android Auto, Spotify points out that the average age of a car in the U.S. is actually 11 years old and the average lifetime of cars is 18 years. That means there are still a large number of cars on the road that don’t support modern, in-car infotainment systems.

Car Thing is being introduced to serve this market — and likely, to give Spotify the opportunity to explore future business models where it has a more direct relationship with customers inside the vehicle, though the company isn’t speaking to its longer-term ambitions at this time.

The new Car Thing itself is a lightweight (3.4 oz.), thin (4.6″ x 2.5″ x 0.7″) music and podcast player that offers a combination of voice control, knobs, buttons and a touchscreen display for navigating its menus and selecting the media you want to hear. You can choose to set up the device to work via Bluetooth or an AUX or USB cable, depending on how you usually connect your phone to your car stereo to play music.

You’re also able to mount Car Thing to your dash in a variety of ways, as the device ships with three different types of dash and vent mounts to choose from, along with a car charger and USB-C cable. 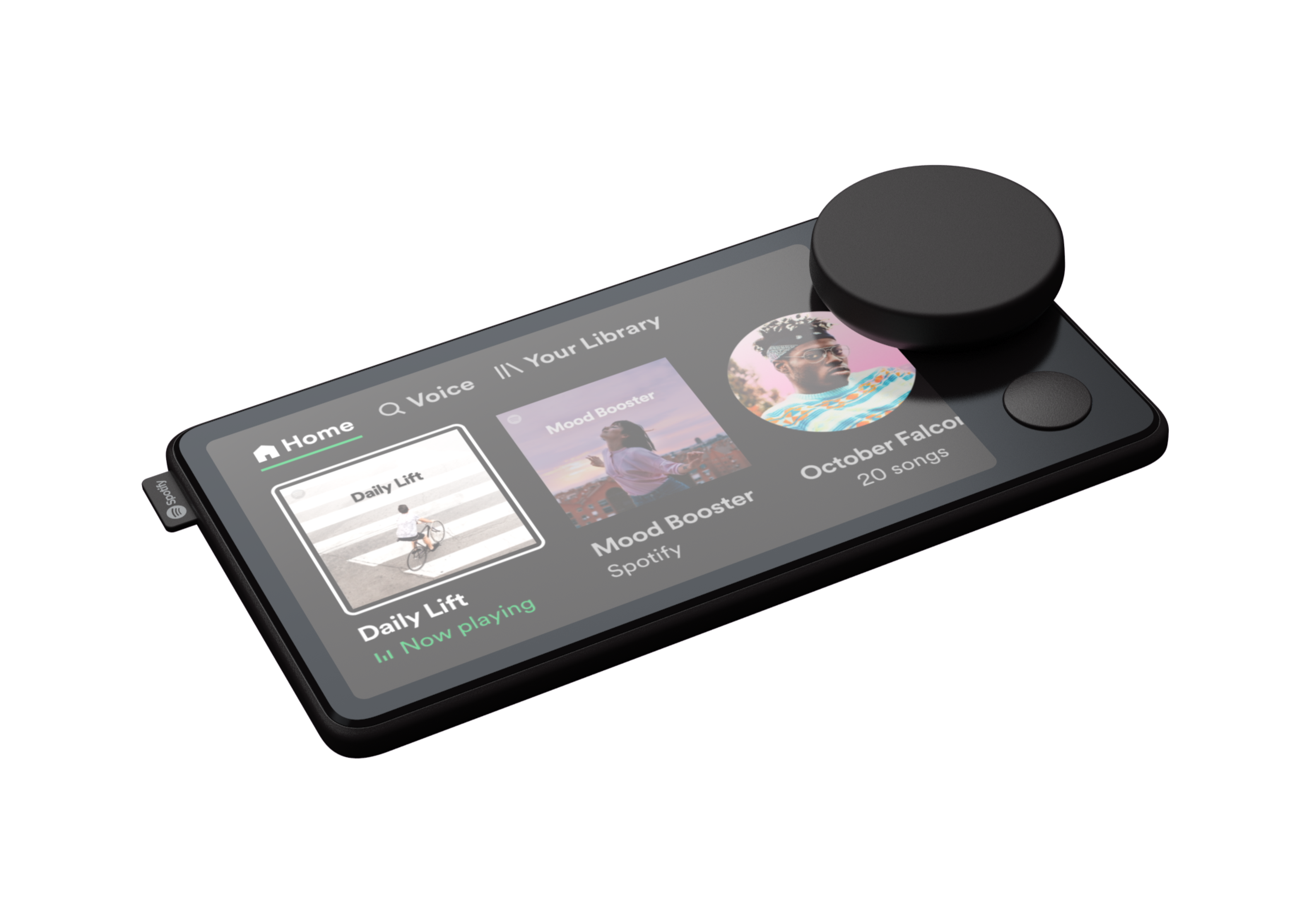 At launch, Car Thing will walk you through a quick tour, where it explains how to get started. The user interface recalls the Spotify mobile app, so it isn’t difficult to get used to for first-time users. Here, you can tap, swipe and use your voice to interact with the screen. The knob lets you quickly move through your choices — an experience that may be more comfortable to those used to interacting with knobs on their car’s built-in stereo.

Across the top of the device are four preset buttons that let you save your favorite content for easy access. By default, these are configured with your Liked Songs and Spotify’s Daily Drive and Morning Commute playlists, with the last preset empty. Many users may just keep these selections, but you can change them at any time, Spotify says.

Ahead of the device’s launch, Spotify quietly began rolling out support for its “Hey Spotify” voice command, which Car Thing leverages, too. This lets you speak your requests directly to Spotify by asking for a song, album, artist, playlist, station or podcast, which Car Thing “hears” by way of its four microphones at the top. (Four, because Spotify wants Car Thing to respond even if you’re blasting your music or have the windows down, which creates additional noise.)

On mobile devices, using “Hey Spotify” is an opt-in option that you can shut off from the app’s settings. But Car Thing represents a smarter, not to mention more safety-focused, use case for voice control. Instead of fiddling with the screen or knobs, you can speak your commands — or allow your kids to shout out their options from the backseat, perhaps.

Spotify’s policy regarding its use of voice data explains the company will collect recordings and transcripts of what you say along with information about the content it returned to you, and may use the data to improve the feature over time. The company told us that beyond the voice data, the device isn’t collecting any more information than it does already in the mobile app. Still, Car Thing does give Spotify a more direct window into what people listen to during commutes and longer road trips, which could inform its future products, programmed playlists and other features.

“In a typical year, Americans spend over 70 billion hours in their cars and there are 250 million cars on America’s roads today,” noted Spotify’s head of Global Culture and Trends, Shanon Cook. “That’s a lot of time spent on the road. So what you do and what you listen to, to help you get through those hours in the car really matters.”

Initially, Car Thing is being made available for free during this limited release period, as selected users will just pay the cost of shipping — a choice Spotify made because Car Thing is still somewhat experimental.

“This is Spotify’s first hardware, and we obviously want to get things right,” said Spotify’s head of Hardware Products, Andreas Cedborg. “And we want to learn quite a lot here in the beginning, so it’s a natural way for us to start,” he said. 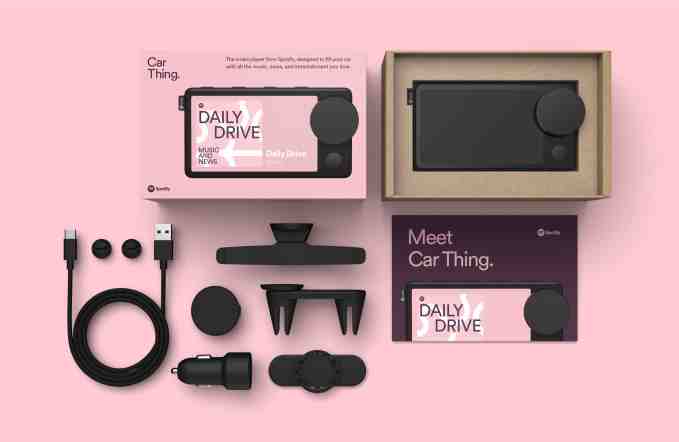 Spotify says the current retail price for the device is $80. It doesn’t know if or when it will begin to retail the device, however. But it can roll out updates to its software so at least the device won’t be immediately obsolete, if Spotify decides to go in a different direction one day.

Despite Spotify’s exploration into hardware, the company stressed it doesn’t aim to be a hardware company. If anything, it’s seems more likely that Spotify is toying with the idea of becoming the next SiriusXM by way of a specialized in-car experience — although one that’s even more of an add-on than SiriusXM, as you physically have to attach the thing — the Car Thing — to your dash. Longer-term, it’s not clear it makes much sense to develop a Car Thing product line as cars get smarter every year and infotainment systems become more standard.

Car Thing will only be offered to U.S. Spotify Premium subscribers with a smartphone on an invite-only basis via carthing.spotify.com. The company declined to say how many units would be shipped, so you’ll probably want to jump on the waitlist sooner rather than later if such a device interests you.