Small businesses in Africa need digital banking services, including plenty of credit. Although these businesses drive economic growth and contribute up to one-third of the continent’s GDP, they are often financially excluded from credit and other financial services due to their size and informality.

One such company tackling this challenge in the eastern part of Africa is Ugandan fintech startup Numida. And today, the company is announcing the close of its $2.3 million seed round.

Mina Shahid, Catherine Denis and Ben Best founded Numida in 2017 and capitalized on the opportunity to build one of East Africa’s first digital fintechs targeting semi-formal micro and small businesses. Typically, these businesses access credit from family, loan sharks and informal money lenders that offer poorly designed consumer credit. They can also get loans from a traditional microfinance institution but not without meeting a series of requirements.

But the founders didn’t set out to offer credit to businesses when they first started. An initial pilot in 2016 was centered around a bookkeeping tool that enabled traditional microfinance institutions (MFIs) to provide unsecured credit to semi-formal businesses.

“One of the major reasons why financial institutions don’t give loans to these businesses is because they don’t have good financial track records and cash flow history,” Shahid said to TechCrunch. “That was the problem we set out to solve — to create the mechanisms to get that cash flow data and present it in a form that can be used and incorporated into the underwriting processes.”

The founders thought that these microfinance institutions would begin to use the data obtained from months of bookkeeping to serve these businesses. But they didn’t envisage what happened after nine months. Shahid stated that even though the MFIs claimed to love the data that Numida could bring out, they were unwilling to adjust their underwriting practices. In turn, they rejected all Numida’s customers who applied for loans on the platform because they lacked collateral.

“So we thought among ourselves that if our mission is to unlock access to resources that these mom and pop shops need in order to grow their businesses, we’re not going to do that by partnering with these traditional MFIs; we had to do that ourselves,” he continued.

Via a proprietary credit score, Numida offers risk-based pricing on an applicant’s first loan. After that, businesses can access unsecured working capital loans of up to $3,500 in less than two hours, according to the company. 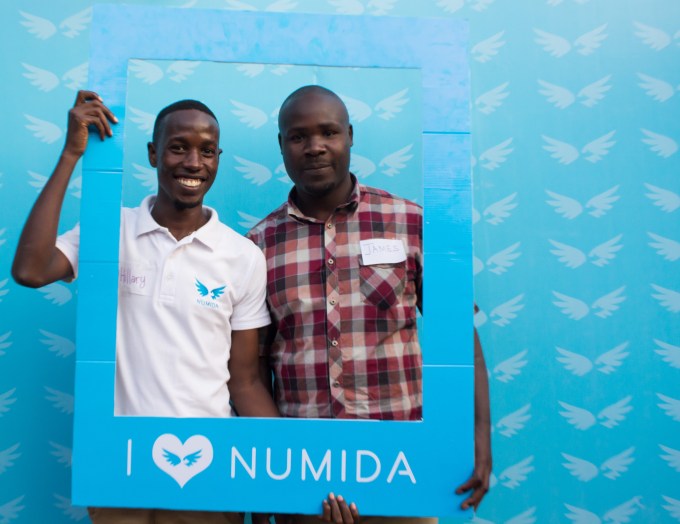 From May 2017, when it pivoted, to September 2019, Numida kept its outstanding portfolio very small and iterated on its underwriting process and credit risk algorithm. After making several iterations, the company went full on to the market in October 2019, and the CEO says the company has grown 6x in lending volumes.

To date, it has provided more than $2 million in unsecured credit to 3,000 micro and small businesses in Uganda, disbursing around $250,000 per month. This is with outstanding collections, repayment rates and client retention, the CEO added.

Although the consumer digital lending space in East Africa has seen an abundance of transactions in recent years, the same cannot be said for startups targeting the micro and small business segment. As one of the few facing this segment, the business has faced issues around getting relevant data to improve its model but doesn’t collate data it thinks isn’t necessary (social media activities, SMS or mobile money transactions) for the sake of aggregating data.

“We look at the business fundamentals, the cash flow of the business, and some demographic data about the applicants. We’ve had to build our own data set because there are no readily available cashflow data on semi-formal, micro and small businesses in Africa,” remarked Shahid.

Its underwriting model was built off 15,000 loans, which took a long time to execute, and this timing puts some strain on how fast it can onboard customers and serve them. But the company has since moved past that problem and easily serves thousands of customers. The pandemic also helped in accelerating its growth and with this new investment, Numida is poised to grow further.

The last time MFS Africa was in the news regarding an investment dates back to June 2020, when it acquired Ugandan fintech startup Beyonic for an undisclosed amount.

Numida is another Ugandan fintech, and a similar play might be in the cards. According to Shahid, the most obvious acquisition path for any successful lending startup to small businesses in Africa is a payments platform. His reason? Because credit is one of the core financial products that will create loyalty and retention to a specific payments platform.

He adds that MFS is a strategic investor in Numida and not the typical VC. He sees the Pan-African company as owning infrastructure, which his company can ride on as a solid foundation for scale. “That’s an opportunity we see in the future. We were concerned about scaling across the continent and who would be the best partner for this. We thought MFS has a lot of expertise and footprint on the continent that will allow us to scale moving forward.”

With this new financing, Numida plans to expand aggressively in Uganda and pilot in a new market, preferably in West Africa. There are some parallels between Uganda and Ghana, Numida’s primary choice in the region. They both have similar mobile money penetration, issues with traditional financial service providers and similar businesses that Shahid says make an enticing market. Per plans, Numida will introduce to its customers additional financial services like payments, micro-insurance and deposits.