The 2022 Chevy Bolt EUV may look like a larger, slightly longer Chevrolet Bolt, but under that boxy exterior lies a whole lot of tech that’s both affordable and very advanced. With the launch of the Chevy Bolt EUV, and its available suite of advanced driver assistance systems, GM is putting both advanced driver assistance technology and electric drivetrains within reach of the masses.

As part of GMs much-touted goal to introduce 30 new electric vehicles in the next four years, the company recently launched an updated Bolt, as well as the all-new Bolt EUV, or Electric Utility Vehicle. I had two separate opportunities to test prototypes of the Bolt EUV with GM’s advanced Super Cruise system.

While the Bolt and Bolt EUV share similar DNA, they are two different vehicles. The EUV is the longer and larger of the two, with more bells and whistles, like Super Cruise: An advanced driver assistance system that allows for hands-free driving on certain highways, available as a $2,200 option. Super Cruise is not available on the 2022 Bolt.

The Bolt EUV is powered by a 288-cell, 65-kWh battery pack that Chevy says makes 200 hp and 266 lb-ft of torque. Chevrolet estimates that the EUV will get 250 miles on a full charge, and when charging on the go, can regain up to 95 miles of range in 30 minutes on a DC fast charger.

On household power, (specifically 240V) the EUV will take around 7-8 hours to charge up to 100%, which is how Chevy says it expects most consumers will power their crossover. To assist with that, Chevrolet had teamed up with home charging installer Qmerit to offer free charger installation if you buy or lease a new Bolt or EUV. Installation of a home charger can cost as much as $2,000, so it’s a decent incentive.

The Bolt EUV won’t get the upgraded Ultium battery pack and underlying architecture that’s coming on the Hummer EV, Cadillac Lyric and other future GM electric vehicles. Instead, the Bolt EUV is built on the BEV2 architecture, the same one on which the 2021 Bolt is built. As mentioned, it also gets Super Cruise as an optional add-on.

Since Super Cruise’s introduction in 2017, the system has been siloed in Cadillac products, showing up on the 2018 CT6 and finally expanding to the 2021 CT5. The Bolt EUV is the first production vehicle outside of a luxury GM brand to offer the system even as paid upgrade.

The Launch Edition, which included the optional Super Cruise, a lighted charging port and special badging, carried a sticker price of $43,495. As of this writing, reservations for the Launch Edition are completely full, but you can still reserve an LT or Premier trim in the 2022 Bolt EUV. Super Cruise, however, is only available as a $2,200 option on the Premier trim, which starts at $38,495. Keep in mind, these prices are all before including any state or local tax incentives or rebates for electric vehicles.

In contrast, a Tesla Model Y Long Range model, the most affordable of the bunch since Tesla dropped that vehicle’s base option, starts at $41,990 before incentives. Getting Tesla’s so called Full-Self Driving feature — which is not self-driving and is actually a driver assistance system — will cost you an additional $10,000.

Super Cruise, while impressive, tends to err on the side of caution when it comes to implementing the technology. The system allows for drivers to take their hands and feet off the controls on more than 200,000 miles of mapped divided highway all over the country.

“If we can bring congestion and crashes to zero, then developing fully-autonomous driving is worth it,” Jeremy Short, the vehicle chief engineer who is responsible for the engineering, development, validation, testing and manufacturing of the Bolt EUV, said during my second time with the crossover. “The next 10 years are going to get really interesting in the autonomy space. Five years ago, would you have thought we would have what we have now with Super Cruise?”

That being said, Super Cruise isn’t perfect, and GM continues to iterate the product, even on the Bolt EUV. During my first drive in a Bolt EUV prototype from Marina Del Rey to Burbank and back in peak Los Angeles rush hour traffic, Super Cruise seemed a little bit “off.” The system ping-ponged in the wide lanes on the highway. When the vehicle was moving under 30 mph, the system lost track of the lane markings on mapped highways like the extremely busy 405, causing it to drift toward the other lanes and switch off a number of times. 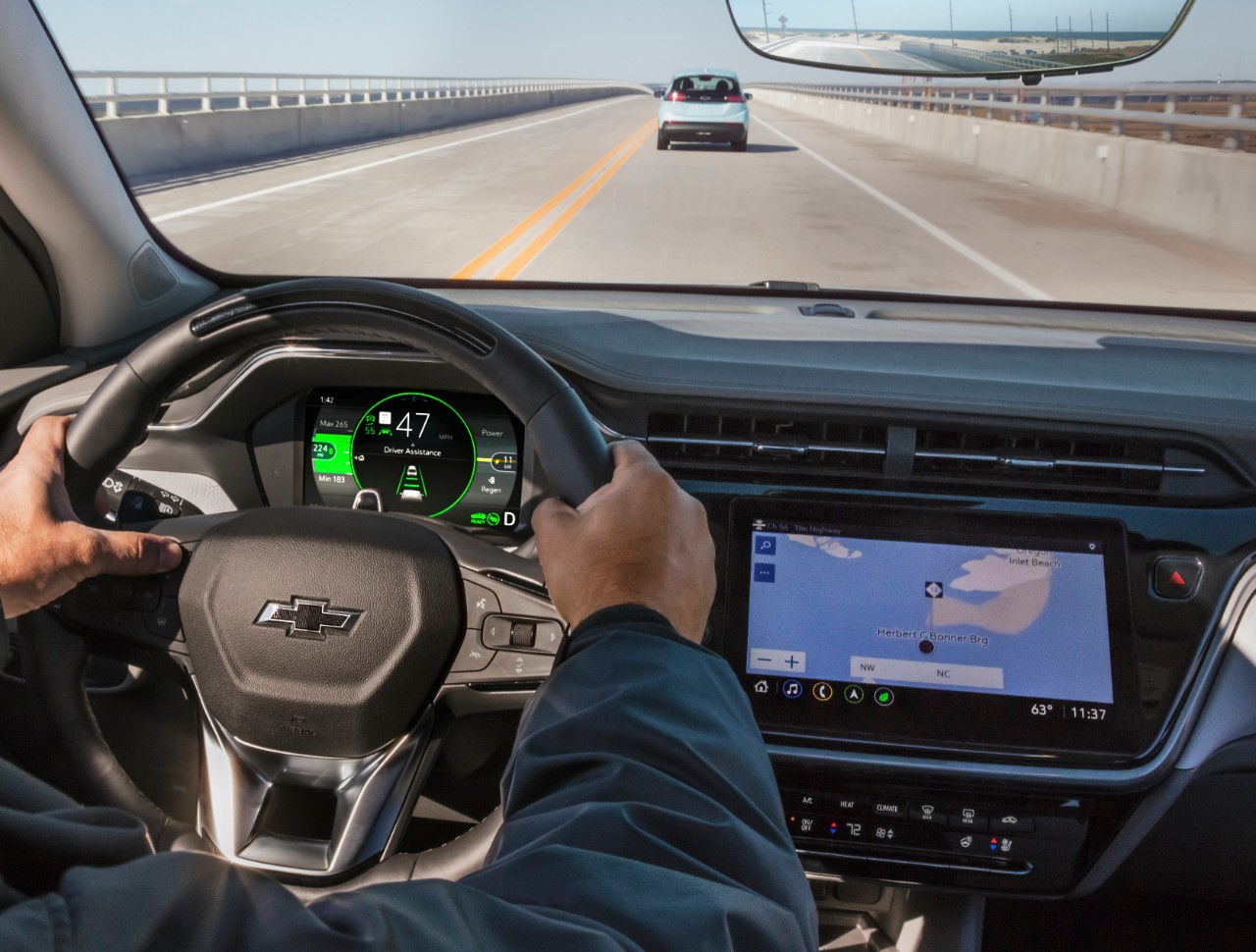 A few weeks later, on a second prototype drive that followed a 50-mile loop originating in Carson, the system appeared to have gained its sea legs. However, both Short, who was following in another prototype vehicle, and I noted that Super Cruise in the EUV still had problems when traffic slowed below 10 mph. When cars ahead slowed, the EUV would slow appropriately, but then begin to drift across the lane once traffic moved forward, as if it had lost the lane markings. Eventually, the alert to take over would sound and Super Cruise would shut off.

“I did notice some ping-ponging at low speeds,” Short said after our drive. He then joked that it will require some more engineers driving that stretch of road to teach the system to navigate it without bouncing around the lane. He also said that speed and California’s strange concrete roadbeds (they have textured surfaces that can look like lane markings to AI) can affect Super Cruise. “Think of it like tracer fire; the more data you have coming in, the more accurate the car can be.”

Short says that the Super Cruise system is continually learning and updating — even if it’s fully baked on vehicles like the CT5 and CT6. Every time Super Cruise is added to a new vehicle, the sensors, software and processing needs to be updated and tweaked because each car has different weights, potential speeds, dimensions, steering and braking, space for sensors and features. For example, you will be able to get a version of Super Cruise on the 2022 Cadillac Escalade which includes automatic lane changing features. The 2022 Bolt EUV, however, doesn’t get those sensors and therefore can’t automatically change lanes.

“Each vehicle that has Super Cruise implemented has different anatomy so it needs to process and do different things,” Short said. “The Super Cruise on the Bolt EUV was developed at the same time that engineers were developing it on the Escalade. There’s very different steering and braking in each car so the two systems are different.”

Super Cruise qualifies as an advanced Level 2 autonomous vehicle. As the driver, you still have to remain alert, and attentive, but you can remove your hands from the steering wheel and your feet from the pedals on roads where Super Cruise is available. Sensors embedded in the steering wheel track your eyes (even at night or when you’re wearing dark sunglasses) to ensure that you are paying attention to the road ahead and not watching a movie, napping or glancing at your phone. The system doesn’t give you much leeway to take your eyes off the road while using Super Cruise, either. At 65 mph, you can reach over and change the radio station on the 10.2-inch infotainment screen but alarms will sound if you look away for more than just a few seconds.

“If you were on a long drive from Los Angeles to Las Vegas,” Short explained after I asked about it, “you’d essentially be a front passenger. Both you and your passenger would be looking down the road, keeping your eyes up for any potential issues. When I did that trip with a friend and used Super Cruise, I felt the same level of fatigue that he did, which is to say, not much.”

The other bells and whistles

We haven’t had the typical full week to test the 2022 Bolt EUV to fully evaluate. However, there was enough time to evaluate some of the vehicle’s features.

Chevy’s new onboard infotainment and navigation system runs on the company’s Infotainment 3 software. The system’s voice control, which has natural language processing, allowed me to do a quick search to find local charging stations.

The drawback? The system brought up a number of charging stations, but didn’t indicate which ones were available, in service, out of service, or if they were part of the EvGo system, the charging company that GM has partnered with. Driver’s also can’t page through results while using Super Cruise because the driver monitoring system will notice that their eyes aren’t on the road ahead.

In order to find EvGo chargers, owners need to use the myChevrolet App to locate the chargers and then send the directions to the navigation system. While driving, the system does lock out some features, and Short notes that you won’t be able to flip through pages of apps.

It will be interesting to see how this plays out once we get more time in the EUV. That being said, it’s not likely to be as seamless as the Tesla charging experience.

At its core, the 2022 Chevrolet Bolt EUV offers some of the most advanced driver assistance technology on the market in an EV package for an attainable price. After spending two separate four-hour stints in prototype versions of the EUV, it’s clear that this compact SUV has the space, power and high-tech capability that will allow it to go head-to-head with the likes of the Tesla Model Y, Volvo’s XC40 Recharge, Ford’s Mach-E and Volkswagen’s ID.4.

The 2021 Volkswagen ID. 4 ticks all the boxes, except one