In a small industrial park located nearly halfway between Los Angeles and San Diego, one company is claiming to have hit a milestone in the development of a new technology for generating power from nuclear fusion.

The 20-year-old fusion energy technology developer TAE Technologies said its reactors could be operating at commercial scale by the end of the decade, thanks to its newfound ability to produce stable plasma at temperatures over 50 million degrees (nearly twice as hot as the sun).

The promise of fusion energy, a near limitless energy source with few emissions and no carbon footprint, has been 10 years out for the nearly 70 years since humanity first harnessed the power of nuclear energy.  But a slew of companies — including TAE, General Fusion, Commonwealth Fusion Systems and a host of others across North America and around the world — are making rapid advancements that look to bring the technology from the realm of science fiction into the real world.

For TAE Technologies, the achievement serves as a validation of the life’s work of Norman Rostoker, one of the company’s co-founders who had devoted his life to fusion energy research and died before he could see the company he helped create reach its latest milestone.

“This is an incredibly rewarding milestone and an apt tribute to the vision of my late mentor, Norman Rostoker,” said TAE’s current chief executive officer, Michl Binderbauer, in a statement announcing the company’s achievement. “Norman and I wrote a paper in the 1990s theorizing that a certain plasma dominated by highly energetic particles should become increasingly better confined and stable as temperatures increase. We have now been able to demonstrate this plasma behavior with overwhelming evidence. It is a powerful validation of our work over the last three decades, and a very critical milestone for TAE that proves the laws of physics are on our side.”

Rostoker’s legacy lives on inside TAE through the company’s technology platform, called, appropriately, “Norman.” In the last 18 months that technology has demonstrated consistent performance, reaching over 50 million degrees in several hundred test cycles.

Six years ago, the company had proved that its reactor design could sustain plasma indefinitely — meaning that once the switch is flipped on a reaction, that fusion reaction can continue indefinitely. Now, the company said, it has achieved the necessary temperatures to make its reactors commercially viable.

It’s with these milestones behind it that TAE was able to raise an additional $280 million in financing, bringing its total up to $880 million and making it one of the best financed private nuclear fusion endeavors in the world.

“The Norman milestone gives us a high degree of confidence that our unique approach brings fusion within grasp technologically and, more important, economically,” Binderbauer said. “As we shift out of the scientific validation phase into engineering commercial-scale solutions for both our fusion and power management technologies, TAE will become a significant contributor in modernizing the entire energy grid.”

The company isn’t generating energy yet, and won’t for the foreseeable future. The next goal for the company, according to Binderbauer, is to develop the technology to the point where it can create the conditions necessary for making energy from a fusion reaction.

“The energy is super tiny. It’s immaterial. It’s a needle in the haystack,” Binderbauer said. “In terms of its energy discernability, we can use it for diagnostics.” 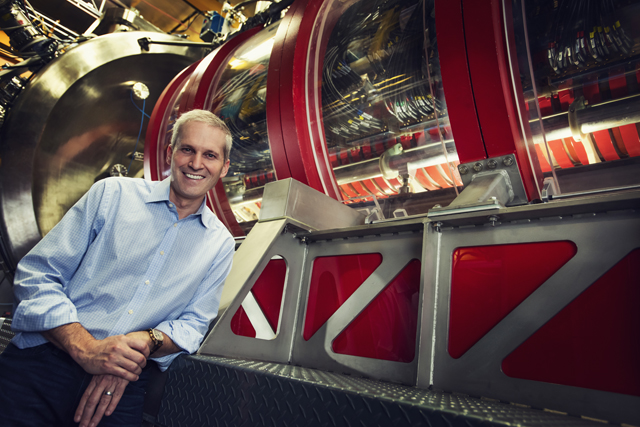 The new machine was first fired up in the summer of 2017. Before it could even be constructed TAE Technologies went through a decade of experimentation to even begin approaching the construction of a physical prototype. By 2008, the first construction began on integrated experiments to make a plasma core and infuse it with some energetic particles. The feeder technology and beams alone cost $100 million, Binderbauer said. Then the company needed to develop other technologies like vacuum conditioning. Power control mechanisms also needed to be put in place to ensure that the company’s 3 megawatt power supply could be stored in enough containment systems to power a 750 megawatt energy reaction.

Finally, machine learning capabilities needed to be tapped from companies like Google and compute power from the Department of Energy had to be harnessed to manage computations that could take what had been the theorems that defined Rostoker’s life’s work, and prove that they could be made real.

“By the time Norman became an operating machine we had four generations of devices preceding it. Out of those there were two fully integrated ones and two generations of incremental machines that could do some of it but not all of it.”

While fusion has a lot of promise as a zero-carbon source of energy, it’s not without some serious limitations, as Daniel Jassby, the former principal physicist at the Princeton Plasma Physics Lab noted in a 2017 Bulletin of the Atomic Scientists article.

Now, an energy source consisting of 80 percent energetic neutron streams may be the perfect neutron source, but it’s truly bizarre that it would ever be hailed as the ideal electrical energy source. In fact, these neutron streams lead directly to four regrettable problems with nuclear energy: radiation damage to structures; radioactive waste; the need for biological shielding; and the potential for the production of weapons-grade plutonium 239—thus adding to the threat of nuclear weapons proliferation, not lessening it, as fusion proponents would have it.

In addition, if fusion reactors are indeed feasible—as assumed here—they would share some of the other serious problems that plague fission reactors, including tritium release, daunting coolant demands, and high operating costs. There will also be additional drawbacks that are unique to fusion devices: the use of a fuel (tritium) that is not found in nature and must be replenished by the reactor itself; and unavoidable on-site power drains that drastically reduce the electric power available for sale.

TAE Technologies is aware of the problems, according to a spokesperson for the firm, and the company has noted the issues Jassby raised in its product development, the spokesperson said.

“All the callouts to tritium is exactly why TAE has been focused on pB-11 as its feedstock from the very beginning (early 90’s). TAE will reach D-T conditions as a natural stepping stone to pB-11, cause it cooks at ‘only’ 100M c, whereas pB-11 is upwards of 1B c,” the spokesperson wrote in a response. “It would seem like a much harder accomplishment to then scale to 1B, but what this milestone proves is the ‘Scaling law’ for the kind of fusion TAE is generating — in an FRC (the linear design of “Norman”, unlike the donut Tokamaks) the hotter the plasma, the more stable it becomes. It’s the opposite of a [Tokamak].  The milestone gives them scientific confidence they can increase temps beyond DT to pB11 and realize fusion with boron — cheap, aneutronic, abundant — the ideal terrestrial feedstock.”

As for power concerns, the TAE fusion reactor can convert a 2MW grid feed into 750MW shots on the machine without taking down Orange County’s grid (and needing to prove it to SCE), and scale power demand in microseconds to mold and course-correct plasmas in real-time, the spokesperson wrote.

In fact, TAE is going to spin off its power management technology into a separate business focused on peak shaving, energy storage and battery management on the grid and in electric vehicles.

The demonstration facility “Copernicus,” which will be built using some of the new capital the company has announced raising, will start off on the DT fuel cycle and eventually make the switch. Over time, TAE hopes to license the DT technology while building up to its ultimate goal.

Funding the company’s “money by milestone” approach are some of the world’s wealthiest families, firms and companies. Vulcan, Venrock, NEA, Wellcome Trust, Google and the Kuwait Investment Authority are all backers. So too, are the family offices of Addison Fischer, Art Samberg and Charles Schwab.

“TAE is providing the miracles the 21st century needs,” said Addison Fischer, TAE board director and longtime investor who has been involved with conservation and environmental issues for decades. Fischer also founded VeriSign and is a pioneer in defining and implementing security technology underlying modern electronic commerce. “TAE’s most recent funding positions the company to undertake their penultimate step in implementing sustainable aneutronic nuclear fusion and power management solutions that will benefit the planet.”