Pinterest today hosted an event focused on its creator community, where the company announced a series of updates including the launch of a $500,000 Creator Fund, a new content policy called the Creator Code, as well as new moderation tools, among other things. With the changes, the company says its goal is to ensure the platform continues to be an “inclusive, positive and inspiring place.” The new content guidelines put that into more specific terms as it requires Pinterest creators to fact-check content, practice inclusion, be kind and ensure any call to action they make via the site doesn’t cause harm.

Creators will be required to agree and sign the code during the publishing process for Story Pins, where they tap a button that says “I agree” to statements that include “Be kind,” “Check my facts,” “Be aware of triggers,” “Practice inclusion” and “Do no harm.” 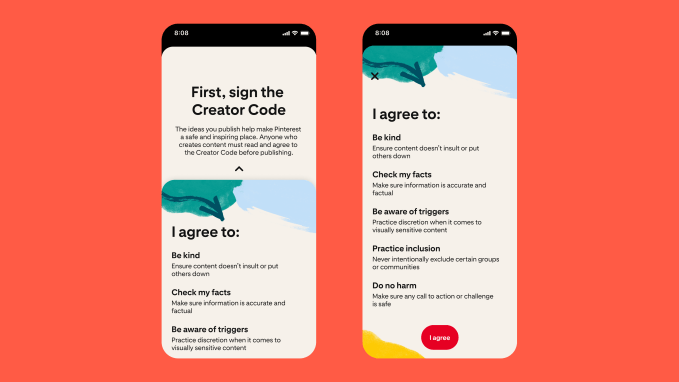 The code will be enforced the same way Pinterest today applies its rules for its other content policies: a combination of machine learning and human review, Pinterest tells us. However, the site’s algorithm will be designed to reward positive content and block harmful content, like anti-vaccination sentiments, for example. This could have a larger impact on what sort of content is shared on Pinterest, rather than a pop-up agreement with simple statements.

The Creator Code itself is not yet live, but will roll out to creators to sign and adopt in the weeks ahead, Pinterest says. 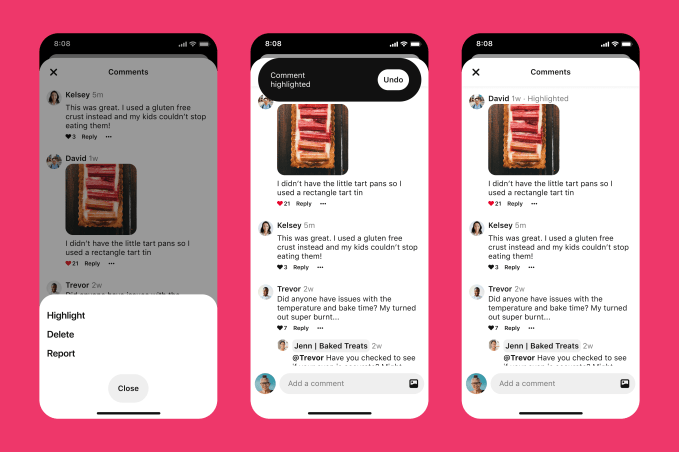 It’s launching comment moderation tools that will allow creators to remove and filter comments on their content, as well as tools that will allow them to feature up to three comments in the comment feed to highlight positive feedback. New spam prevention tools will help to clear out some of the unwanted comments, too, by leveraging machine learning technology to detect and remove bad comments.

Also new are “positivity reminders,” which will pop up asking Pinterest users to reconsider before posting potentially offensive comments. The notification will push users to go back and edit their comment, but doesn’t prevent them from posting. 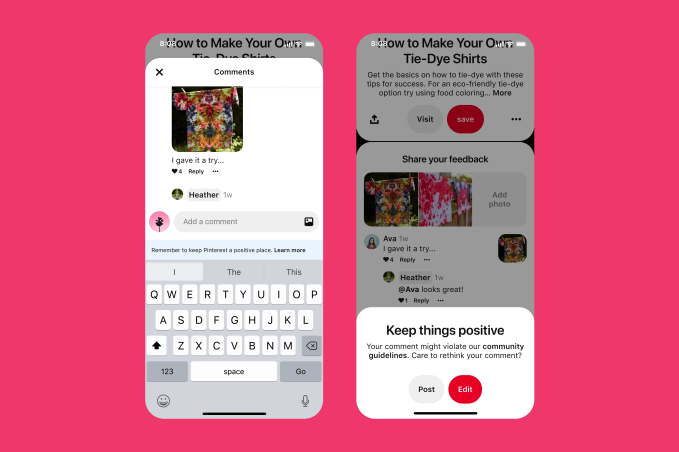 Related to these efforts, Pinterest announced the launch of its first-ever Creator Fund at today’s event. The fund is specifically focused on elevating creators from underrepresented communities in the United States and will offer a combination of creative strategy consulting and compensating them with budget for content creation and ad credits. At least 50% of the fund’s recipients will be from underrepresented groups, Pinterest says.

The company tells us it’s initially committed to giving creators $500,000 in cash and media throughout 2021.

“For the first participants of the program, we worked with eight emerging creators across fashion, photography, food and travel, and will be identifying 10 more creators in the next few months for the next cohort,” noted Creator Inclusion Lead Alexandra Nikolajev.

“We’re on a journey to build a globally inclusive platform where Pinners and Creators around the world can discover ideas that feel personalized, relevant and reflective of who they are,” Nikolajev said.

Pinterest has been working to rebuild its image in the wake of last year’s allegations of a host of internal issues, including unfair pay, racism, retaliation, and sexism, which conflicted with its outside image of being one of the “nicer” places to work in tech. Despite this fallout — which included a lawsuit, employee walkout, petitions and more — the issues that had been raised weren’t always reflected in Pinterest’s product.

Pinterest employees are walking out today in light of discrimination allegations

The company had previously launched inclusive features like “skin tone ranges” to help those shopping for beauty products find matches for their skin tone. It also allowed retailers and brands to identify themselves as members of an underrepresented group, which gave their content the ability to appear in more places across Pinterest’s platform, like the Today tab, Shopping Spotlights and The Pinterest Shop, for instance.

“We’ve been building Pinterest for 11 years, and ever since our users routinely tell us that Pinterest is the ‘last positive corner of the internet.’ In that time, we’ve also learned that you need to design positivity into online platforms as deliberately as much as you design negativity out,” Sharp said. “The Creator Code is a human-centric way for Creators to understand how to be successful on Pinterest while using their voice to keep Pinterest positive and inclusive,” he added.

To kick of its announcement, Pinterest’s Head of Content and Creator Partnerships, Aya Kanai, interviewed television personality Jonathan Van Ness (Queer Eye) at today’s virtual event, where they talked about the need for positivity and inclusivity on social media. Other event participants included creators Peter Som, Alison Cayne, Onyi Moss, Oyin Edogi and Jomely Breton — the latter two who spoke about putting the Creator Fund to use for themselves.