Weather intelligence platform ClimaCell today announced that it has raised a $77 million Series D funding round led by private equity firm Stonecourt Capital, with participation by Highline Capital. This brings the company’s total funding to about $185 million. In addition to the new funding, ClimaCell announced that it has changed its name to Tomorrow.io, with “The Tomorrow Companies Inc.” as its new legal name.

Today’s announcement comes only a month after the company announced that it would launch a fleet of small radar-equipped weather satellites to improve its weather monitoring and forecasting capabilities. That’s also, at least in part, where the name change comes from. 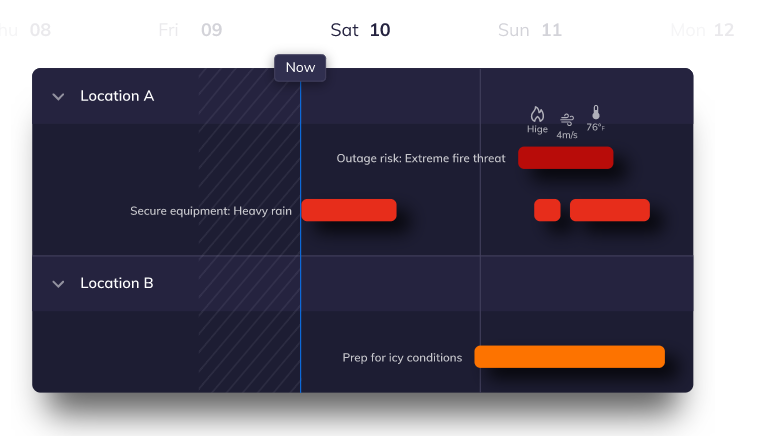 Originally, ClimaCell/Tomorrow.io built out a novel technology to collect weather data using wireless network infrastructure and IoT devices. That’s where the “cell” in ClimaCell came from. But as the company’s CEO and co-founder Shimon Elkabetz told me, while the company isn’t abandoning this approach, its focus today is much broader.

“The mission is really to help countries, businesses, organizations, to better manage their weather-related challenges,” he said. “And the ambition was always to be that largest weather enterprise in the world, the most disruptive, the most industry-defining. And I think this is the perfect timing for us to come up with a new name, not only because of the funding but because we were able to explain to ourselves that really, we’re helping others take control of tomorrow, today.”

That’s something Stonecourt partner Rick Davis agrees with. “While the company’s growth has been tremendous since launch, there is a larger opportunity at play here,” he said. “What Tomorrow.io is building, corroborated by their recent announcement of launching radar-equipped satellites into space, is only further proof that this company represents the future of weather forecasting for the entire planet. The privatization of the weather industry is now, and that type of vision is what compels the team here at Stonecourt Capital.”

As Elkabetz noted, Tomorrow.io isn’t a typical investment for a private investment firm like Stonecourt. Last year, the firm acquired 365 Data Centers, but it is also backing the Denver-based freight rail company Alpenglow Rail, for example.

And while many of Tomorrow.io’s customers saw their business decline during the pandemic (the company counts Uber and Delta among its users, for example), Elkabetz tells me that its team focused on diversifying its customer base and managed to sign up a number of large logistics companies, including major railways in the U.S. and Mexico, but also smaller companies in the drone, autonomous driving and electric vehicle space. In total, the company says, it saw a 200% net revenue retention rate and its annual contract value grew 850% during the past two years.

The company plans to use the new funding to launch more satellites, but also to improve its overall product and accelerate its go-to-market activities.

“We’re an interesting company because we’re a SaaS company that is now going to space,” Elkabetz said. “A lot of the Earth observations companies are now scratching their heads and saying, ‘Oh, we can’t just sell observations, it’s not monetizable or becoming a commodity. We now need to become a software company and build the platform and do the analytics.’ Good luck.”