Self-driving and robotics startup Cartken has partnered with REEF Technology, a startup that operates parking lots and neighborhood hubs, to bring self-driving delivery robots to the streets of downtown Miami.

With this announcement, Cartken officially comes out of stealth mode. The company, founded by ex-Google engineers and colleagues behind the unrequited Bookbot, was formed to develop market-ready tech in self-driving, AI-powered robotics and delivery operations in 2019, but the team has kept operations under wraps until now. This is Cartken’s first large deployment of self-driving robots on sidewalks.

After a few test months, the REEF-branded electric-powered robots are now delivering dinner orders from REEF’s network of delivery-only kitchens to people located within a 3/4-mile radius in downtown Miami. The robots, which are insulated and thus can preserve the heat of a plate of spaghetti or other hot food, are pre-stationed at designated logistics hubs and dispatched with orders for delivery as the food is prepared.

“We want to show how future-forward Miami can be,” Matt Lindenberger, REEF’s chief technology officer, told TechCrunch. “This is a great chance to show off the capabilities of the tech. The combination of us having a big presence in Miami, the fact that there are a lot of challenges around congestion as COVID subsides, still shows a really good environment where we can show how this tech can work.”

Lindenberg said Miami is a great place to start, but it’s just the beginning, with potential for the Cartken robots to be used for REEF’s other last-mile delivery businesses. Currently, only two restaurant delivery robots are operating in Miami, but Lindenberger said the company is planning to expand further into the city and outward into Fort Lauderdale, as well as other large metros the company operates in, such as Dallas, Atlanta, Los Angeles and eventually New York.

Lindenberger is hoping the presence of robots in the streets can act as a “force multiplier,” allowing them to scale while maintaining quality of service in a cost-effective way.

“We’re seeing an explosion in deliveries right now in a post-pandemic world and we foresee that to continue, so these types of no-contact, zero-emission automation techniques are really critical,” he said.

Cartken’s robots are powered by a combination of machine learning and rules-based programming to react to every situation that could occur, even if that just means safely stopping and asking for help, Christian Bersch, CEO of Cartken, told TechCrunch. REEF would have supervisors on site to remotely control the robot if needed, a caveat that was included in the 2017 legislation that allowed for the operation of self-driving delivery robots in Florida.

“The technology at the end of the day is very similar to that of a self-driving car,” said Bersch. “The robot is seeing the environment, planning around obstacles like pedestrians or lampposts. If there’s an unknown situation, someone can help the robot out safely because it can stop on a dime. But it’s important to also have that level of autonomy on the robot because it can react in a split second, faster than anybody remotely could, if something happens like someone jumps in front of it.”

REEF marks specific operating areas on the map for the robots and Cartken tweaks the configuration for the city, accounting for specific situations a robot might need to deal with, so that when the robots are given a delivery address, they can make moves and operate like any other delivery driver. Only this driver has an LTE connection and is constantly updating its location so REEF can integrate it into its fleet management capabilities. 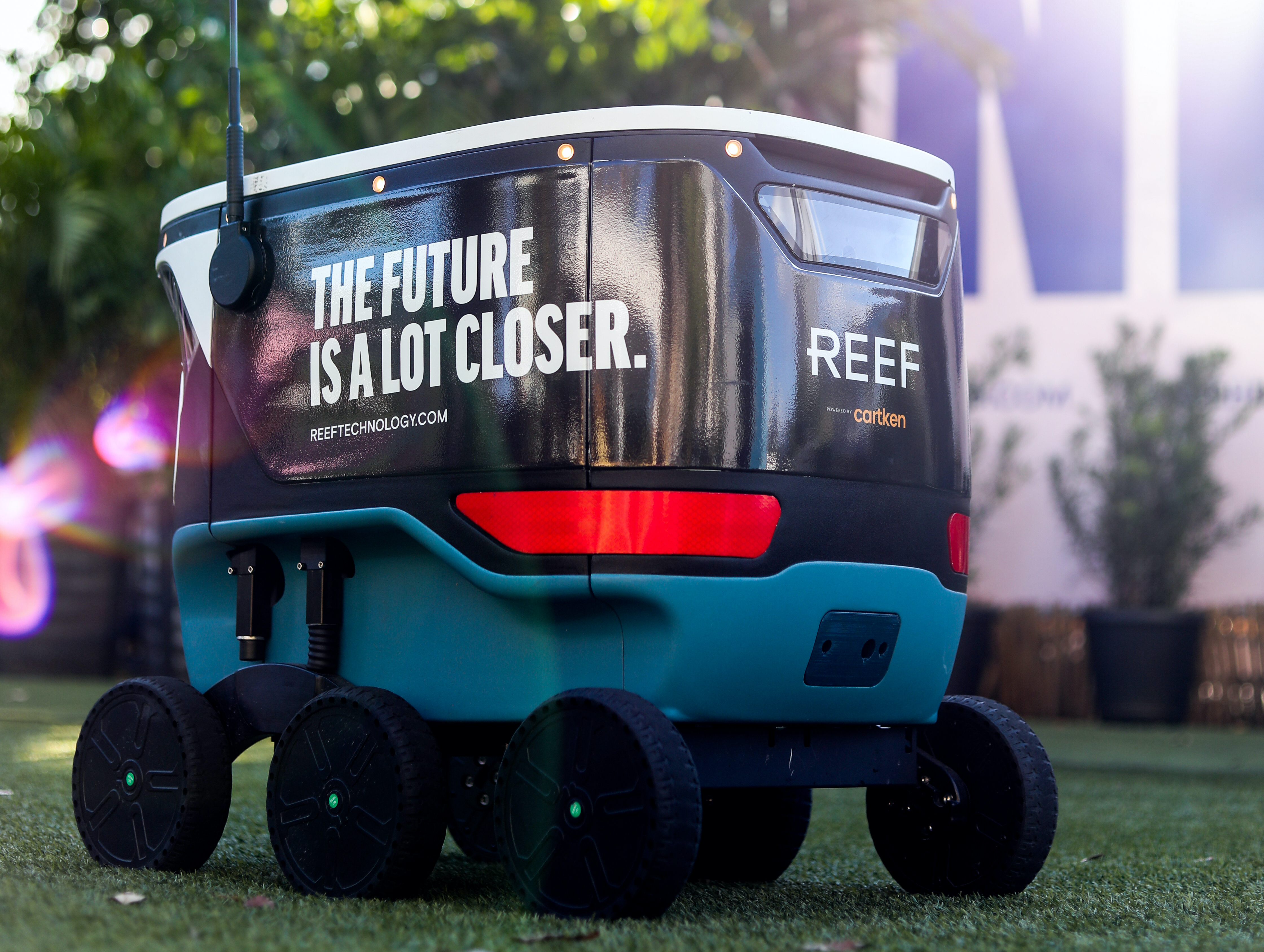 Eventually, Lindenberger said, they’re hoping to be able to offer the option for customers to choose robot delivery on the major food delivery platforms REEF works with like Postmates, UberEats, DoorDash or GrubHub. Customers would receive a text when the robot arrives so they could go outside and meet it. However, the tech is not quite there yet.

Currently the robots only make it street-level, and then the food is passed off to a human who delivers it directly to the door, which is a service that most customers prefer. Navigating into an apartment complex and to a customer’s unit is difficult for a robot to manage just yet, and many customers aren’t quite ready to interact directly with a robot.

“It’s an interim step, but this was a path for us to move forward quickly with the technology without having any other boundaries,” said Lindenberger. “Like with any new tech, you want to take it in steps. So a super important step which we’ve now taken and works very well is the ability to dispatch robots within a certain radius and know that they’re going to arrive there. That in and of itself is a huge step and it allows us to learn what kind of challenges you have in terms of that very last step. Then we can begin to work with Cartken to solve that last piece. It’s a big step just being able to do this automation.”