Canadian travel startup Hopper has raised a $170 million Series F round, led by Capital One. The U.S. banks and credit card company is also coming on board as a strategic partner, to launch Capital One Travel, which is the first instantiation of Hopper’s new B2B platform, Hopper Cloud.

This is Hopper’s second raise in a year that has been marked by turmoil for the travel industry, owing to the disruptions caused by the global COVID-19 pandemic. Last March, Hopper raised $70 million in a round that saw Inovia Capital actually make its first investment in the startup — essentially at the very moment that things looked most bleak for the travel industry in general, and in particular for airfare-focused Hopper.

I asked Inovia partner Patrick Pichette about his decision to back Hopper at a moment when a lot of investors where essentially on pause pending the fallout of the just-declared pandemic, and about their renewed support with a contribution to this latest round.

“What we had seen in the prior six months, nine months to a year, at Hopper was a transformation of a company before COVID,” Pichette said. “And second is our thesis at Inovia — we invest in companies with the mindset of, ‘Does this company have a shot at being a global company?’ If it’s gonna be a Canadian company, it might be fine, but it’s just not for us. Also, does it really leverage tech in a way that is differentiated? And so if it has these attributes, then we’re interested.”

That pre-COVID transformation that Pichette is referring to is Hopper’s shift from being essentially a machine learning-powered lowest fare finder to what co-founder and CEO Fred Lalonde says is really much more of a fintech company. That characterization mostly comes from Hopper’s ability to offer customers financial flexibility around their travel bookings.

“The real fundamental sea change is that Hopper moved away from being a predominantly air travel company to a true fintech,” Lalonde explained in an interview. “Price freeze is a good example. We allow you to come in and hold the price of a booking for between two hours and 14 days. If the price goes up you pay what you froze, and if it goes down you pay the lower price. We have flexible date plans, cancellation plans, where you can take a non-refundable, non-changeable ticket and for a nominal fee, make it changeable. And one that’s working really surprisingly well is the disruption insurance.”

Hopper’s disruption insurance is basically a rebooking service for missed connections. Whatever the reason, if you happen to miss a connection on a multiple-leg flight and you have opted for the disruption insurance service, you’ll be presented with every flight leaving that particular airport, regardless of airline, to your destination and you can select an available option at no additional cost.

Understandably, Hopper’s overall business took a hit during the pandemic, and that had a steep cost: The company laid off around 45% of its staff last year as a result of the dip in demand. But for the bookings that were being made, Lalonde says the company was seeing very high attach rates for its products that provide more peace-of-mind around booking stability. Now, with the U.S. travel industry in particular taking its first steps toward recovery, Lalonde says behavior is not changing as much as his company had anticipated. 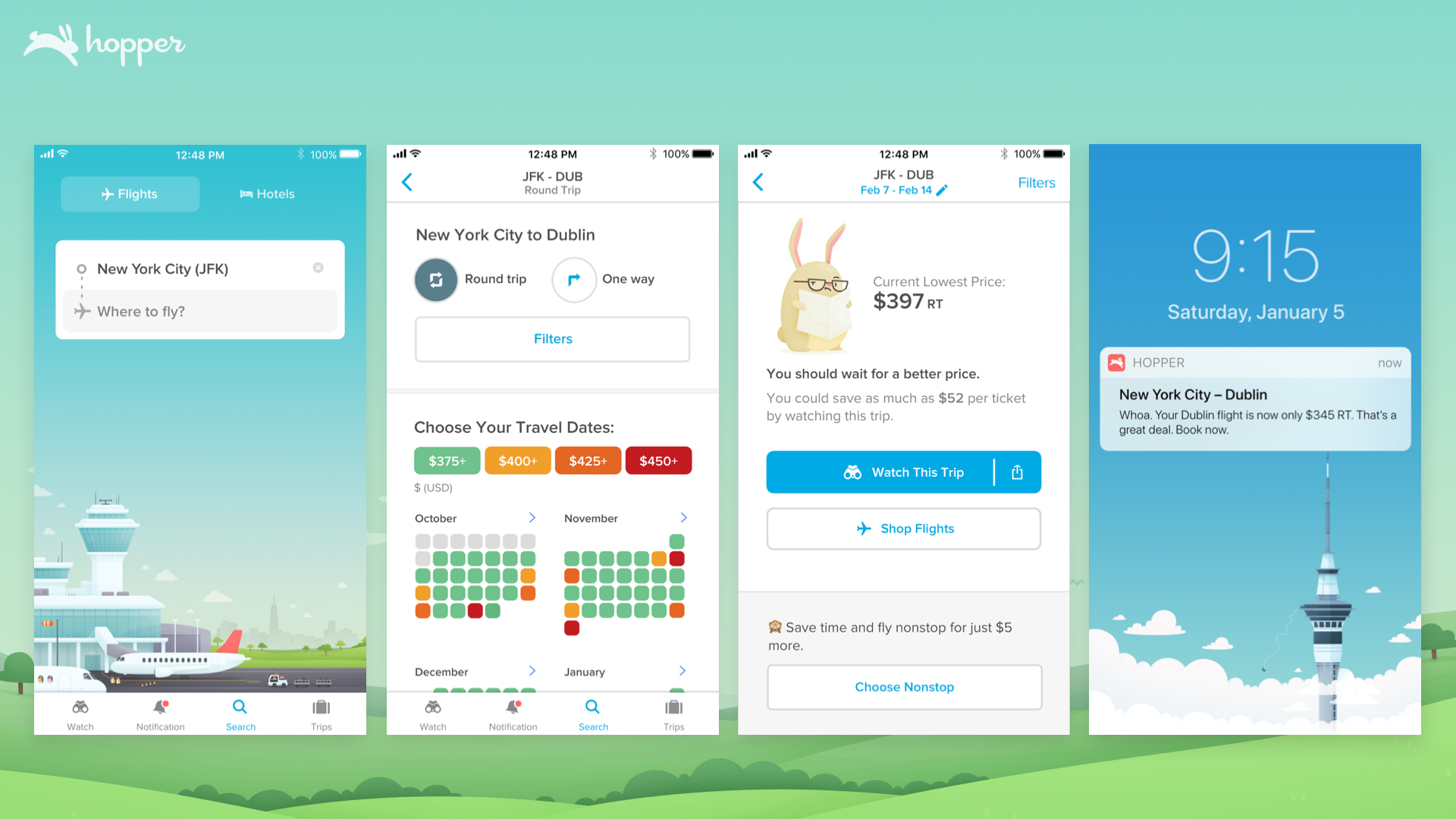 “What is interesting is as demand has recovered, originally we thought since we had very, very high attach rates, we thought those would never come back,” he said. “But we’ve actually outgrown our pandemic attach rate. So people are adding more of these services, and we credit that to the product innovation.”

Lalonde also credits the pandemic for proving out the validity of its fintech approach, since Hopper “had a lot of liabilities” in place prior to the global shutdowns, and so a lot of investors and observers were watching and thinking that though this was a novel and interesting approach, carrying those liabilities appeared to incur a lot of additional risk, as well. The pandemic was “the mother of all black swan events,” he notes, which means that now, it doesn’t have to talk about the theoretical resilience of its model — it can point to the actual experience.

“Three months later, [it turns out] we lost money for about 30 days,” Lalonde said. “Now we’re back on the other side of this, every color is profitable. The fact is the way that the future travel credits kicked in, and how the refunding works, we ended up with a pretty stable revenue stream.”

Hopper customers may not have felt so optimistic about the company’s performance during the pandemic, however. The startup’s app reviews, Better Business Bureau (BBB) profile and social media accounts were inundated with negative comments and reports of poor experiences. Most centered around either a lack of customer ability to secure their refund, or a failure of communication on Hopper’s part. Lalonde says that Hopper definitely failed at the communication part, and it’s still in the process of hiring hundreds of additional call center employees to improve that part of the business, but fundamentally, it opted to take a hit on that front in order to focus on building a technical solution to handle the unprecedented volume of flight credits coming from airlines.

“The part that is misunderstood is that all of a sudden, the airlines gave out these future travel credits,” he said. “These vouchers, we had to key them in all by hand. And I swear, this is a green screen — you have to go in and do commands. It takes about 20 minutes to do one, so we counted how much time with all of our staff, it would take us to do them by hand. And the answer was we’d be done in 2070, and then even if you double the number of people doing it, it was 2050.”

No existing automation for this process existed because prior to the pandemic, credits for non-refundable airline tickets just didn’t really exist, and particularly not at scale. At that point, Lalonde says Hopper “made a decision to put everybody on the automation, [and] just get murdered publicly.”

He says that gamble has worked out, since once the automation was up and running, they’ve been able to clear out the backlog pretty much entirely. And the company has also been focused on new product developments, including shifting its roadmap to prioritize the addition of car rental and hotel/holiday home booking to better suit the needs of pandemic travel, which has largely been overland in North America. That has meant deprioritizing other areas, including international expansion, but Lalonde says that’s one focus for use of the new funds the company raised.

The other big focus is Hopper Cloud, a B2B offering that provides the benefits of Hopper’s machine-learning power price prediction, as well as its fintech travel insurance and disruption prevention products, but tied to another businesses’ unique offerings. In the case of Capital One, that means all the rewards the company offers its cardholders in terms of earning and redeeming travel credits, for instance. I asked Lalonde whether that approach was made more appealing by the fact that it somewhat intermediates the customer experience, but he pointed out that the initiative is a co-branded one, so Hopper still has its name on the product and the accountability. Plus, he added, the real advantage of these kinds of partnerships are the network effects, and Hopper’s goal remains becoming the top booking destination for customers directly.

“One of the reasons I never want to drop the marketplace — it’s growing really quickly and making money, but even if it didn’t, losing that would just put us further away from the end customer,” Lalonde said. “I like the proximity of knowing exactly what happens, and feeling the pain when we screw up and feeling the joy when we get something right.”