User Interviews, the Entrepreneurs Roundtable Accelerator-backed company that has built a CRM for product research teams to get user feedback, has closed on a $10 million Series A round. The financing was led by Teamworthy Ventures, with participation from Las Olas, Accomplice, FJ Labs, ERA, Trestle Partners and ValueStream.

The company, cofounded by Basel Fakhoury, was created out of failure, in some ways. Originally, the User Interviews team started with a project called Mobile Suites, an amenities logistics platform for hotels. It was a dud, and the team — Basel Fakhoury, Dennis Meng and Bob Saris — decided to do more user research before determining their next product.

In trying to collect that research, they stumbled upon a huge problem. It often takes companies weeks, if not months, to conduct a study around user research. The company decided to build out a platform that would procure subjects for research quickly and effectively, using an algorithm to pair qualified, engaged participants with the client.

The product became Recruit, and ran on an a la carte model. To complement Recruit, the team also launched Research Hub, which is a CRM and recruiting tool for research teams to manage their panels. To be clear, User Interviews doesn’t run the surveys or A/B tests themselves, but rather helps companies manage participants and. logistics for those studies.

Recently, User Interviews added a subscription layer to its product, allowing companies to purchase access to the software on an annual basis, rather than on a usage basis. Fakhoury says that this dual-model allows companies to try out the platform before they fully commit. 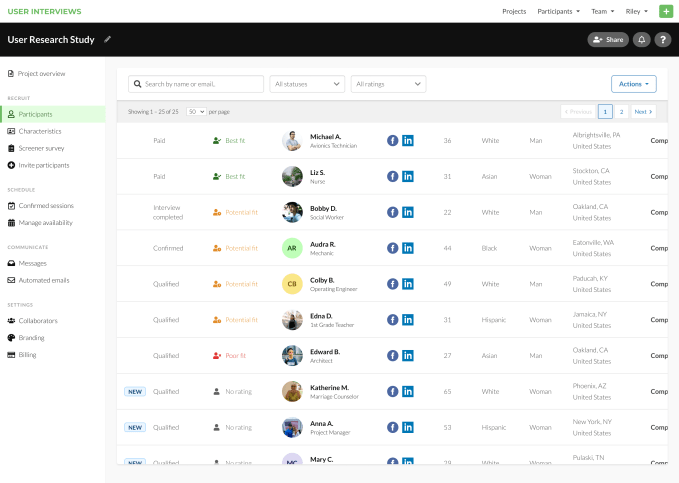 According to the startup, the company has experienced 140 percent annual growth, which has accelerated during the pandemic. Clients include Amazon, Microsoft, Colgate and Spotify.

User Interviews plans on using the new funding to hire more in the product department, as well as build out integrations with user testing software and their clients own data management systems.

Right now, the team is about 50 people, and is fully remote, with nearly half the workforce being female.

Fakhoury said the biggest challenge for the company is being able to do two things at once.

“We are simultaneously disrupting this legacy industry with Recruit, and we are creating a category with Research Hub,” he said. “Those are somewhat different strategies and missions and making sure that we can do both of those in tandem is one big thing for us.”