Apple this morning announced a handful of education-related updates to its suite of classroom apps as well as a new recognition for teachers, called the Apple Teacher Portfolio. Teachers who complete a total of nine lessons where they learn foundational skills on iPad and Mac to become an officially recognized Apple Teacher will be able to submit their portfolio of lesson examples to earn the Apple Teacher Portfolio recognition. They can then also share their portfolio with their colleagues or use it to showcase their work.

Teachers can work towards acquiring the badge through the Apple Teacher Learning Center, which is Apple’s self-paced learning platform for educators. This offering is designed to help teachers learn how to incorporate Apple technologies in the classroom, including by using iPad and Mac apps for creating art, videos, animations, recordings, page layouts, podcasts, data trackers, music, and more. Across the lessons, Apple provides templates as examples which teachers can customize or combine to make their own projects that use either an iPad or Mac and Apple software like Keynote, GarageBand, iMovie, and others. 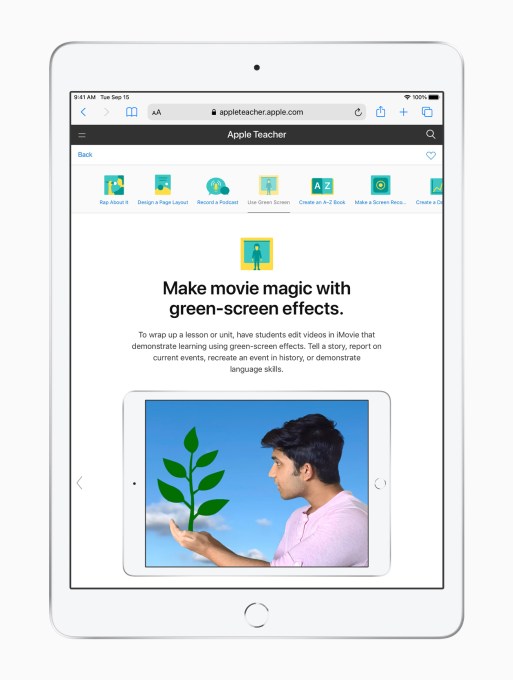 In addition, Apple today rolled out updates across its Schoolwork and Classroom apps, as well as its “Everyone Can Create” curriculum, which has historically focused on taking advantage of Apple’s creative tools like iMovie, Clips and GarageBand.

In Schoolwork, teachers will gain the option to share Schoolwork projects with colleagues by exporting their assignments, which can then be imported back into Schoolwork or other platforms. Other improvements have been made to the sidebar navigation to make it quicker to access classes, assignments and student accounts.

Classroom, meanwhile, has been updated for remote learning — a feature that would have been more useful to have rolled out in 2020, amid the height of U.S. lockdowns during the pandemic. With the update, teachers will be able to invite remote students to Classroom sessions where they’ll be able to guide them to apps, view their screen (with the student’s permission) and track their engagement. The software has also been rebuilt using Mac Catalyst, making it work across iPad and Mac, including Macs powered by Apple’s M1 chips.

The Everyone Can Create” curriculum has had a number of smaller updates. Its Drawing guide has been updated to include motion graphics and animation in Keynote, while Photos now covers the creation of animated GIFs using Keynote, and the Camera and Photos apps. The Video guide will now explore creating short films using a green screen and other special effects, and Music adds new podcasting features using GarageBand, Apple says. Today, more than 5,000 K-12 institutions worldwide are using the curriculum. 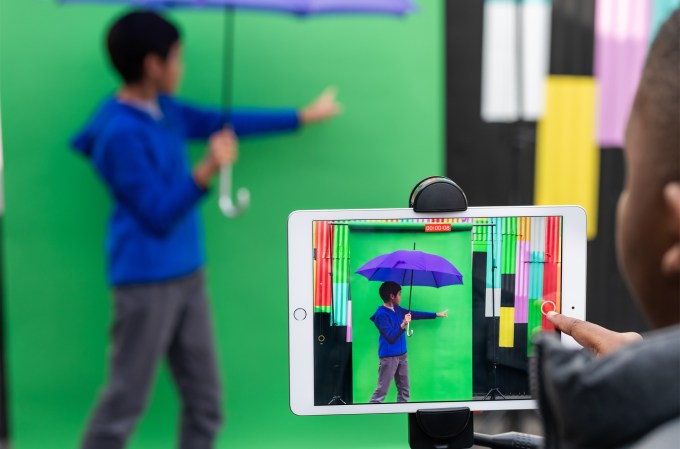 Apple last year had updated its Schoolwork and Classroom apps, with some updates to Schoolwork to support distance learning — like managing assignments over the cloud and support for calling students via FaceTime, for example. But even as the pandemic forced schools towards remote learning, Google jumped ahead of edtech rivals by aggressively giving away its software and courting teachers. Its low-cost Chromebooks were being given out across school districts, doubling demand in 2020. Google Classroom, meanwhile, doubled to more than 100 million active users by April 2020, Bloomberg Quint reported. As of Feb. 2021, Google said the service was being used by over 150 million students, teachers and admins, up from just 40 million last year.

Apple didn’t say today how many users it has for its own educational software programs, by comparison. However, by encouraging teachers to create a portfolio which they can then share, Apple is helping to push towards greater adoption of its tools by more directly involving educators in the process.

Apple Teacher Portfolio launched today and is available in the Apple Teacher Learning Center. The “Everyone Can Create guides” are a free download on Apple Books. And new versions of both Schoolwork and Classroom are available in beta now through AppleSeed for IT.