Lost item finder Tile, the maker of the popular Bluetooth-powered tracker that can help you find your misplaced keys, bag, wallet or more, is bringing its tracking service to a wearable device for the first time with the launch of its Fitbit partnership. Starting today, all new and current Fitbit Inspire 2 users will gain access to Tile’s Bluetooth-finding technology at no extra cost, the company says.

As a result of the deal, existing Inspire 2 users will soon be prompted to update their device’s software via the Fitbit app, which will make the new Tile feature available. Once updated, users will be directed to download Tile’s mobile app for access to the lost item-finding features. From the Tile app, Inspire 2 users will then be able to locate their misplaced Fitbit when they’re within Bluetooth range — for example, if the device has been lost somewhere inside their home. If the device is farther away, users will be able to tap into Tile’s broader finding network which leverages the Tile app installed on all Tile users’ smartphones. When anyone with the app is near the lost item, its location is shared back through the network to the original owner.

At present, Tile says it’s locating up to 6 million unique items per day across 195 countries.

Tile’s service is made available for free to Fitbit users and other customers, but it monetizes through a combination of device sales, in-app subscriptions and other partnerships. The Tile Premium subscription will also be available to Inspire 2 users as an optional upgrade from within the Tile app at $2.99 per month or $29.99 per year. This service, originally targeted toward Tile tracker owners, includes free battery replacements for Tile devices, access to 30-day location history, item reimbursements and smart alerts that remind you when you’ve left home without important things.

“Now with Tile technology, we’re adding even more convenience and helpful tools to Inspire 2, our accessible, easy-to-use activity and sleep tracker,” said Larry Yang, director of Product Management of Fitbit Devices at Google, which finalized its Fitbit acquisition in early 2021. “We’re excited to partner with Tile so our users can focus on building healthy habits without worrying about not being able to find their misplaced device, with the potential to bring Tile’s finding technology to more Fitbit devices in the future,” he added. 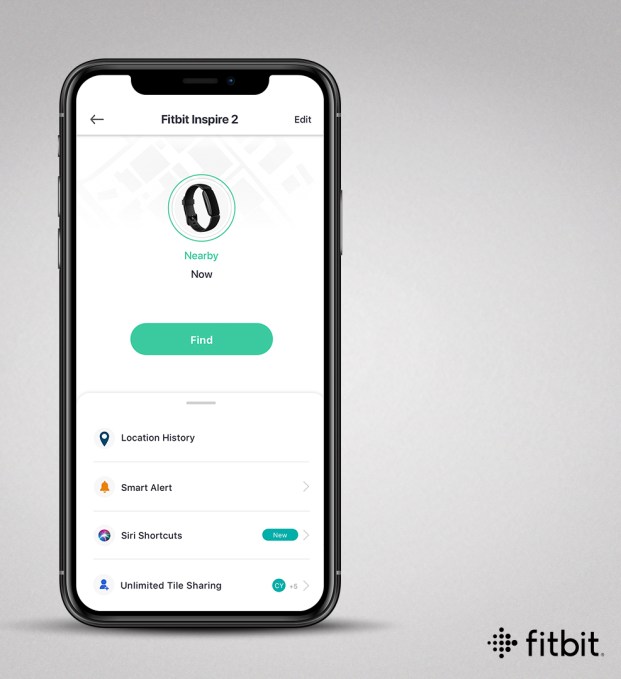 Tile’s partnership with Fitbit is now one of over 20 partners leveraging Tile’s technology in some way across audio, travel, smart home and PC categories. And while technically Fitbit is the first “wearable” partner, Tile has worked with others in the consumer electronics space, including headphone makers like Skullcandy, Bose and Sennheiser.

The company’s ability to expand its reach through industry partners may become even more critical to its future in the face of new competition from Apple, and to some extent, Samsung. Apple has been developing its own Tile competitor, AirTags, which the company accidentally disclosed in a YouTube video last year. These will leverage both Bluetooth and newer ultra-wideband technology to more precisely locate lost items. Meanwhile, Samsung’s newest Tile competitor, the Galaxy SmartTag, will also come in an UWB-powered version later this year.

This competition, specifically from Apple, could spell trouble for Tile, which has become a vocal participant in the U.S. antitrust investigations against Apple. The company has testified against Apple in congressional hearings about how its business has been negatively impacted by Apple in the past, and it pushed for third-party access to Apple’s “Find My” app as a means of evening the playing field between Apple’s upcoming trackers and its own. Tile also joined the Coalition for App Fairness, an advocacy group that’s now pushing for legislation to regulate the app stores in various U.S. states.

Partnering with Apple’s competitor, Google (by way of Fitbit), could be seen as another way for Tile to shore up a position for itself within a key section of the wearables market before AirTags arrive.