Stack Overflow is the default Q&A site for programmers (though the overall Stack Exchange network goes well beyond helping you answer your basic PHP questions). But over the course of the last year and a half, with its new CEO Prashanth Chandrasekar coming on board, the company has also kickstarted its SaaS business with a new focus on its Stack Overflow for Teams product. Teams offers businesses something akin to a private Stack Overflow for managing and sharing knowledge across a company. Until now, Teams was only available through a paid subscription (or a time-gated trial), but starting today, Stack Overflow will move to a freemium model with a perpetually free plan.

As Chandrasekar told me ahead of today’s announcement, Stack Overflow’s $85 million Series E funding round this summer was all about Teams and accelerating its SaaS growth. “We wanted to double down on Teams,” he said. “And that is very much — as we transform into a product-led SaaS company from our foundation of the community and the public platform — that’s a huge, huge focus.” 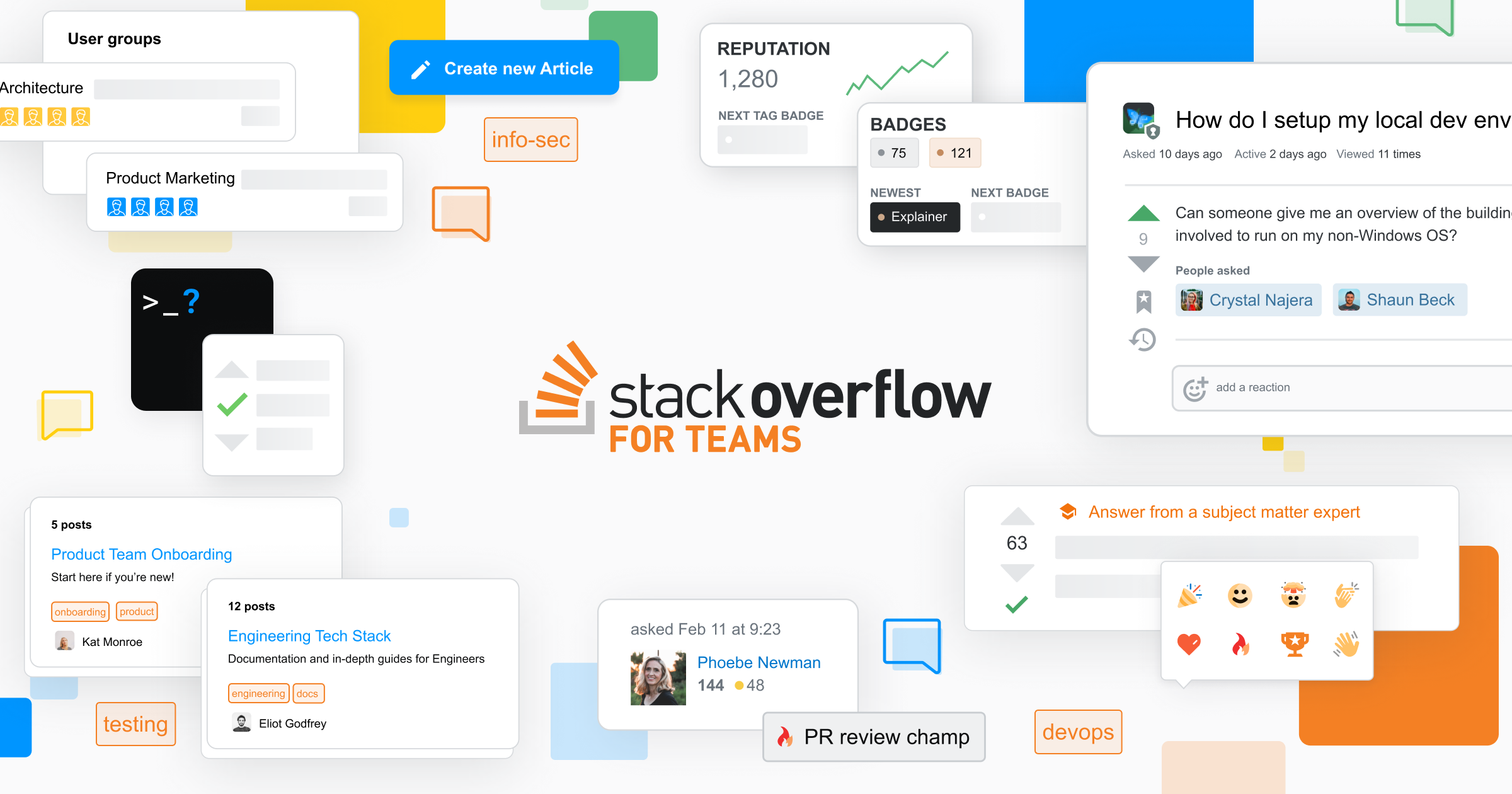 Like so many products in this space, Stack Overflow for Teams experienced rapid growth in 2020. Its annual recurring revenue grew 72% last year, the company tells me, and it added over 1,500 Teams customers, including 70 that opted for its high-end Enterprise tier. Teams customers now include the likes of Box, Microsoft, Bloomberg, Instacart and Zapier.

The new freemium offering will be limited to 50 seats, but for the most part, it’s quite a fully featured solution, with support for all of the core Teams features. It also includes support for the service’s ChatOps integrations with Slack and Microsoft Teams (side note: maybe there are too many products with the name “Teams” right now?). The free service does not include support for single sign-on solutions, though. You’ll need the basic paid plan for that. And while the enterprise tier is SOC II certified and runs on single-tenant instances, that’s not the case for the free, basic and business tiers.

“At Unqork, we use Stack Overflow for Teams and its Slack integration to empower our creators to learn from each other in a productive way and to support our clients building solutions on top of our platform,” said Olga Gomonova, head of enablement at Unqork. “Since implementing Stack Overflow for Teams for internal and external use cases, we’ve been able to reduce the time to respond to client and internal questions from 60 to 30 minutes, and have been able to onboard new hires faster as our company grows.” 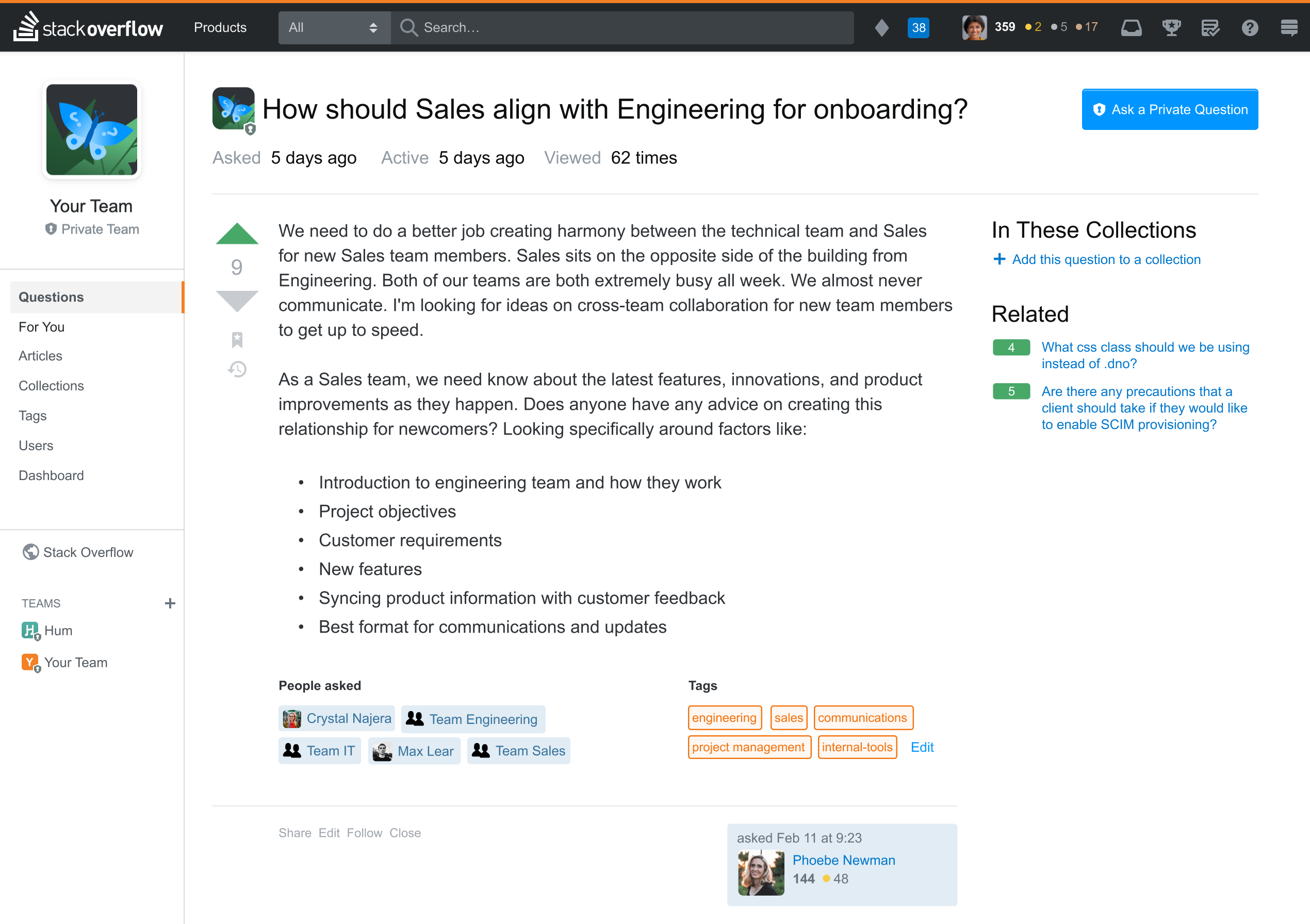 Some of the missing features, however, are access to Stack Overflow for Teams’ Articles format for longer-form content and Collections, a feature that allows users to group together sets of similar questions that can be used for an onboarding workflow or in place of a traditional FAQ document, for example. Stack Overflow CPO Teresa Dietrich tells me that the company has seen over 50% adoption of Articles since its launch in  August 2020. The company also recently introduced a private feedback option for Teams.

“We found that, unlike on the public Q&A sites, people weren’t comfortable giving downvotes to content on the Teams product until we introduced private feedback,” she said. “So now they give feedback to the content writer in a private way that says it’s incomplete, it’s out of date, or it’s wrong. And then they can put text around that feedback and only the owner of that content sees it.”

The freemium offering has been in the works for a while. As Chandrasekar and Dietrich both noted, the company removed the credit card requirement to get started with the 30-day Teams trial that had been in place before. “We realized through that experience, that it was actually not enough time to allow companies to create a community internally and that’s basically what we’re trying to do,” Chandrasekar said. “So that was a huge learning for us to say it didn’t make a lot of sense for us to keep a free trial that was timeboxed. And that really expanded to just make it free for life.”

Dietrich added that before launching this free offering, the company also wanted to make sure that it had optimized its onboarding flow for these free users as well.