This morning TechCrunch covered an interesting round for Copy.ai, a startup that employs GPT-3 to help other companies with their writing projects. GPT-3, or Generative Pre-trained Transformer 3, is a piece of AI from the OpenAI group that takes text from the user, and writes a lot more for them.

As part of the process of covering the Copy.ai round, I got caught up in the idea of AI-powered writing. I’ve long been more curious than afraid of automated writing. So when the Copy team described their very positive impressions of the GPT-3 AI writing tool to TechCrunch during an interview, I was intrigued.

To scratch this newly formed itch, I doodled around this morning with a competitor of sorts to the Copy team, Headlime. And, freaking heck am I am impressed at what folks have managed to build around the GPT-3 technology.

Sure, GPT-3 can add words to a prompt. But the technology can do a lot more than that. The GPT-3-powered Headlime managed to not only write some medium-good stuff for me, but also managed to bring in concepts concerning my reporting beat that were in my head but not in the prompts I provided.

I can’t do better than just show you what I mean. So, here’s what happened when I used Headlime for the first time, sans help.

Here’s the first thing that Headlime showed me, a language selector and a request for a description of the post that I wanted to write. I decided to push the system a bit by just telling it about a piece I need to write in light of today’s market action: 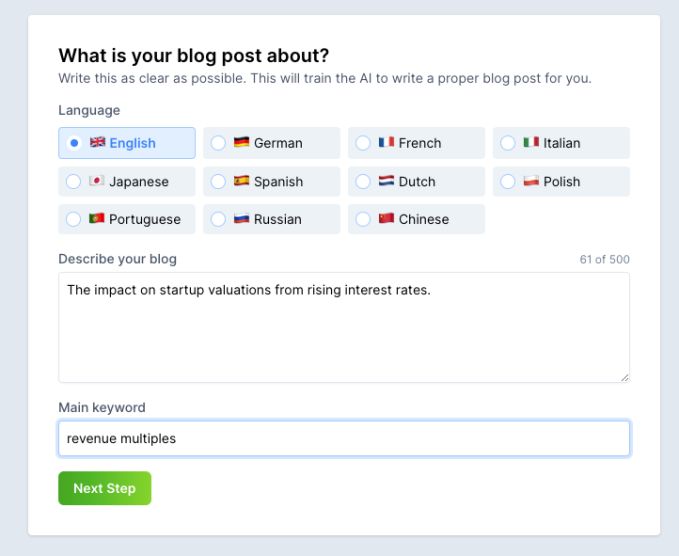 Ha ha, I thought, that will kick it in the teeth and I, a biped of intelligent meat wrapped around some calcium sticks, will feel grossly superior to the computer player. I hit go and then realized that I actually had to provide 500 characters of stuff, so I rambled for a bit to fill in required length: 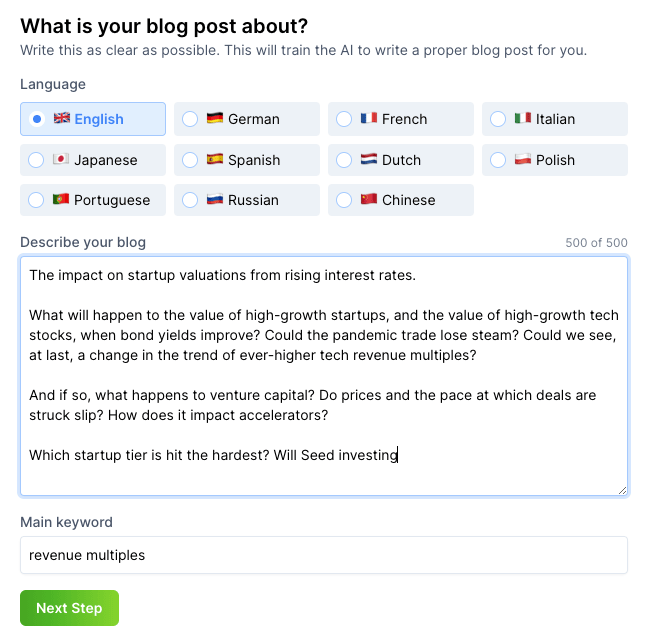 Time for the next step! Hitting the button brought up a list of possible headlines for the post I was helping create, which were honestly not terrible: 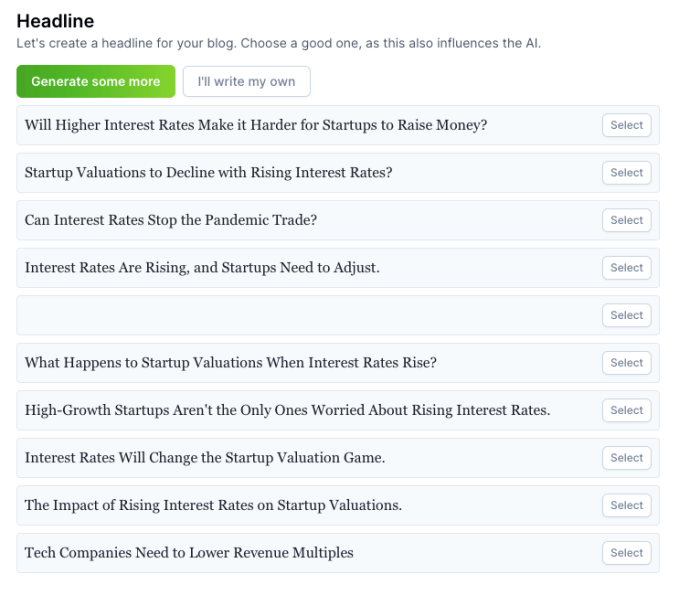 Fair enough, yeah? At this point I was starting to become impressed.

I selected the first headline as it was my favorite and moved along. Next came the work to get an intro put together for the post, a process that involved the strenuous work of clicking a button: 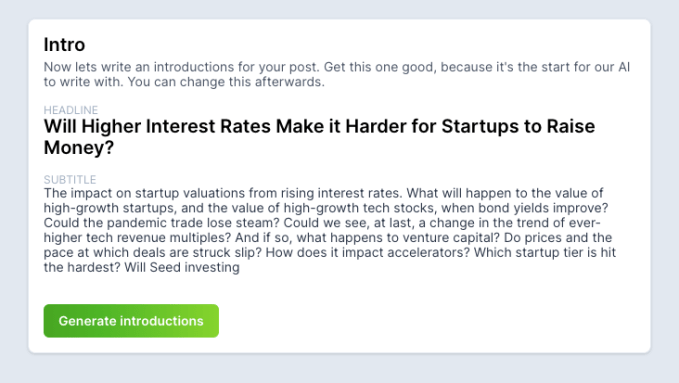 Here are the options proffered: 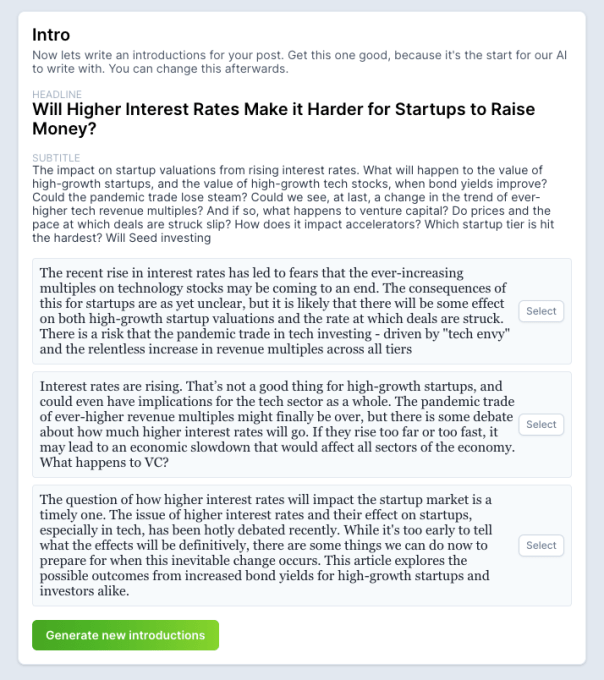 What struck me about these are not merely minor variations on each other. They are structured differently, taking various angles on what I was halfway talking about in the 500 characters of bilge I had fed into the system. I was starting to wish that I had given GPT-3 a bit more to work with up top, as it was trying its best after I had clearly not.

Intro selected, I was brought into a CMS of sorts, where our selected bits were included, and your humble servant was asked to do a bit more writing. 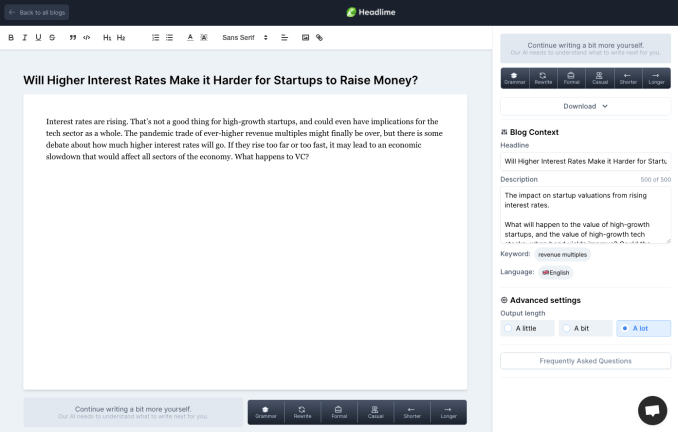 I was happy to oblige, only for the system to stop me and offer to take over: 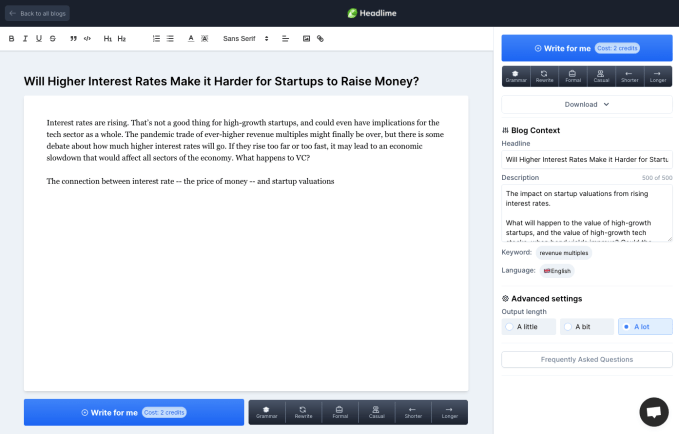 Having precisely no idea what a credit is, or what two of them cost as I was on a free trial of sorts, I hit the “Write for me” button. This is what came out: 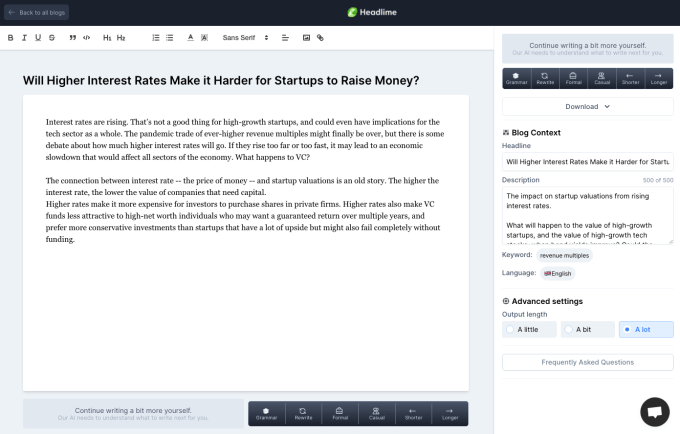 Look at how it finished that sentence I started, even after I used em dashes! The software gets the next sentence backward, but is right back on the horse afterward talking about how higher interest rates make exotic investment classes like venture capital less attractive! I was gobsmacked.

I will keep playing with the tech and the various software wrappers that are being built to productize GPT-3. More notes to come. But I wanted to pause and share my initial delight. This is cool. I can’t recall the last time that technology actually shocked me. But, well played GPT-3, you’re amazing.