Apple announced this morning it’s teaming up with Common Sense Media to curate a selection of kid-friendly podcasts in the U.S. in light of what appears to be growing interest in spoken-word entertainment among families. That interest, in part, may have been prompted by the pandemic and parents’ desire to reduce kids’ screen time for entertainment.

Via a new website at Apple.co/showsforkids (which launches Apple Podcasts), Apple has collaborated with Common Sense Media to group podcasts by age group as well as by theme. At launch, the collection features creators like Tinkercast, American Public Media, Gen-Z Media, Pinna, Tumble, Highlights, WNYC Studios, Rebel Girls and Nickelodeon, among others.

In addition to groups by age, there are also four thematic collections available: Common Sense Media Picks, which are all-time family favorites; One More!, which features mysterious tales and action-packed dramas; Kids Know Best, which feature shows picked by kids themselves; and Story Time, which are story-driven shows. 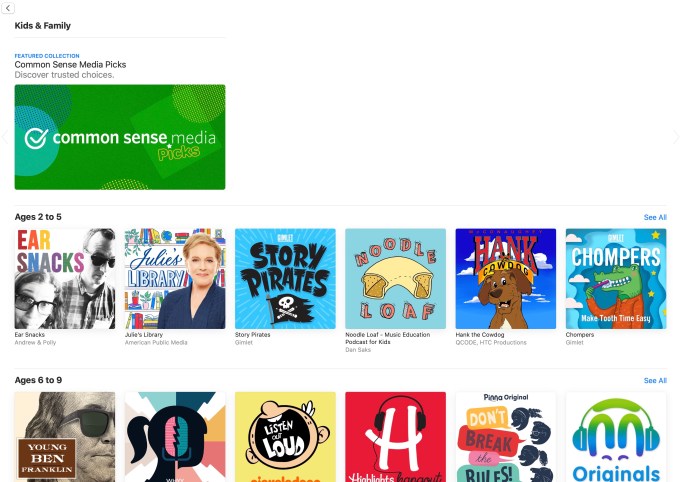 The site will be updated monthly to feature new and popular shows and to introduce timely collections around historical and cultural moments, like Women’s History Month or Back to School ideas, Apple says.

The company also notes the selection of shows is curated using the same sort of research-backed approach that Common Sense Media applies to other entertainment, like TV shows, movies, books, apps and games.

The launch follows Apple’s recent debut of an “Apple for Kids” website that helps parents set up devices for kids and learn about Family Sharing options, highlighting an increased interest in catering to the needs of families.

But unlike with kids’ use of Apple devices, the current market for kids’ podcasts is small — none of Apple’s top 100 podcasts are directed toward kids, for example.

However, industry experts believe the kids market may grow alongside the overall adult podcast market. Plus, as Morning Consult recently reported, the COVID-19 pandemic has helped drive new interest in the audio format as parents struggled to keep kids entertained at home.

Case in point: one leading kids’ podcast, “Wow in the World” by NPR, saw a 94% increase in downloads in the 13 weeks post-COVID compared with pre-COVID, the report said.

In another recent analysis, NPR’s 2020 Spoken Word Audio Report found that 15% of U.S. adults were now listening to children’s spoken word audio — an indication that many parents were already co-listening with kids. In addition, research from Kids Listen, a nonprofit advocacy group for kids’ podcasts, found that 89% of kids who listen to podcasts are ages 8 or under, Morning Consult pointed out.

Apple, it’s worth noting, has been rumored to be considering a new podcast subscription service to challenge Spotify, The Information reported year earlier this year. In the weeks since that report, Apple has seemingly begun to pay more attention to the format, having launched a new editorial franchise, Apple Podcasts Spotlight, to highlight interesting creators.

Adding kids’ programing could play into Apple’s future ambitions, perhaps, as 64% of parents who listen to podcasts said they’re likely to purchase a paid subscription to podcasts for their kids.

The new collection is live in the U.S. in Apple Podcasts.