California might be the first state to give self-driving cars a deadline to electrify.

In mid-February, a bill was quietly introduced into the California State Legislature that would require all autonomous vehicles to also be zero emission by 2025. Proposed Bill SB 500, which was introduced by Senator Dave Min and sponsored by the Union of Concerned Scientists (UCS), would directly affect the nascent AV industry in applications like ride-hailing, delivery and trucking.

The amendment is in line with many of California’s goals to reduce emissions. It would add to the state’s vehicle code, which currently provides for programs to promote zero-emission vehicles, such as the Clean Vehicle Rebate Project and the Charge Ahead California Initiative.

Governor Gavin Newsom has said he wants all new vehicle sales to be zero emission by 2035, but that doesn’t apply to commercial fleets. Not unless this bill is passed. The proposed bill is in its infancy stages, so there are plenty of opportunities for it to be quashed. But it surfaces an issue for a burgeoning AV industry and the companies trying to develop and commercialize autonomous driving technology in California. It also has the potential to provide a boost to the companies that only use electric vehicles.

“California has set important standards to aggressively address our climate crisis,” Min told TechCrunch. “My SB 500 aligns with these ambitions and takes a critical first step in requiring autonomous vehicles to be zero emission before they are put to widespread use.”

Proponents of the bill don’t want to see future means of transportation married to the technology of the past, pointing out the potential for AVs to either help or hurt attempts to cut emissions. California has a reputation for leading the rest of the country in EV adoption and other emissions-related policies, so the success or failure of this bill could create ripple effects in states across the nation.

“It definitely seems like we’re going to start seeing AVs in these fleet applications, whether that’s ride-hailing or delivery, and that makes it even more important that these vehicles are electric,” said Elizabeth Irvin, senior transportation analyst at UCS. “The average person drives their car 11,000 to 13,000 miles per year, but a full-time Uber or Lyft driver drives 30,000 or more.”

Close to half of California’s greenhouse gas emissions come from transportation. And while there’s nothing quite like a smoggy Los Angeles sunset, supporters say the danger of not placing requirements on the AV industry could lead to a world in which autonomous commercial vehicles are commonplace and powered by fossil fuels.

In a statement defending support of this bill, UCS points to research that shows how AVs could dramatically increase driving, and thus emissions, as people get used to living the luxurious life of a passenger. One study, which examined the potential effects of AVs on the Washington, D.C. metropolitan region transportation system in 2040, found that AVs would cause the total amount of driving to increase by as much as 66% relative to the 2040 baseline year.

Irvin told TechCrunch that UCS has been in talks with various stakeholders — such as Nuro, the SoftBank-backed autonomous delivery startup, and Cruise, General Motor’s self-driving subsidiary — regarding strategies for advancing policy that would require all AVs to be zero-emission in California before mainstream adoption.

“We are supportive of efforts to accelerate the industry’s transition to clean energy, which aligns with Nuro’s goals and values,” said a spokesperson from Nuro. “We are excited for autonomous vehicles to pave the way for the rest of the auto industry, which we believe will lead to a greener and healthier future.”

The sentiment is mirrored by Cruise, which unveiled last year a driverless vehicle called Origin that’s designed for sharing and powered by an all-electric platform built by GM, the result of a multi-year partnership with Honda. Cruise is not testing autonomous Origin vehicles in San Francisco yet; the battery platform is still undergoing testing at GM’s proving grounds. Cruise does have aspirations to roll out a fleet of autonomous vehicles — initially using the all-electric Chevrolet Bolt — as part of a ride-hailing, and possibly a delivery, service in San Francisco.

“Because this industry is so new, everyone has a choice to be an EV or not,” Rob Grant, SVP government affairs at Cruise, told TechCrunch. “It’s not like you have to transform an existing fleet. You have a choice to do this in the beginning rather than going down this path and being forced to change it at some later date.”

Not all AVs use electric vehicles. The Ford Fusion hybrid and Chrysler Pacifica Plug-in Hybrid minivans have been the go-to choices for AV developers, including Argo AI, Aurora, Waymo and Voyage.

Argo AI is a technology platform company that works with major automakers, like Volkswagen and Ford, to develop autonomous driving systems. While Volkswagen’s ID.Buzz will be the company’s first fully electric self-driving car, Ford still prefers to take a more measured approach by modifying the hybrid Ford Fusion.

“We all want to transition to BEVs eventually, but we also need to find the right balance that will help develop a profitable, viable business model,” John Davis, chief engineer at Ford Autonomous Vehicles said. “This means launching with hybrids first.”

Davis outlined various challenges in developing all-electric vehicles as AVs, including depletion of range from on-board tech, decreased use of the vehicle during charge times and degradation of the battery.

“Testing shows that upwards of 50% of BEV range will be used up due to the computing power of an AV system, plus the A/C and entertainment systems that are likely required during a ride-hailing service (for passenger comfort),” Davis said. “We continue to be encouraged as battery chemistry and cost continue to improve to address these issues.” 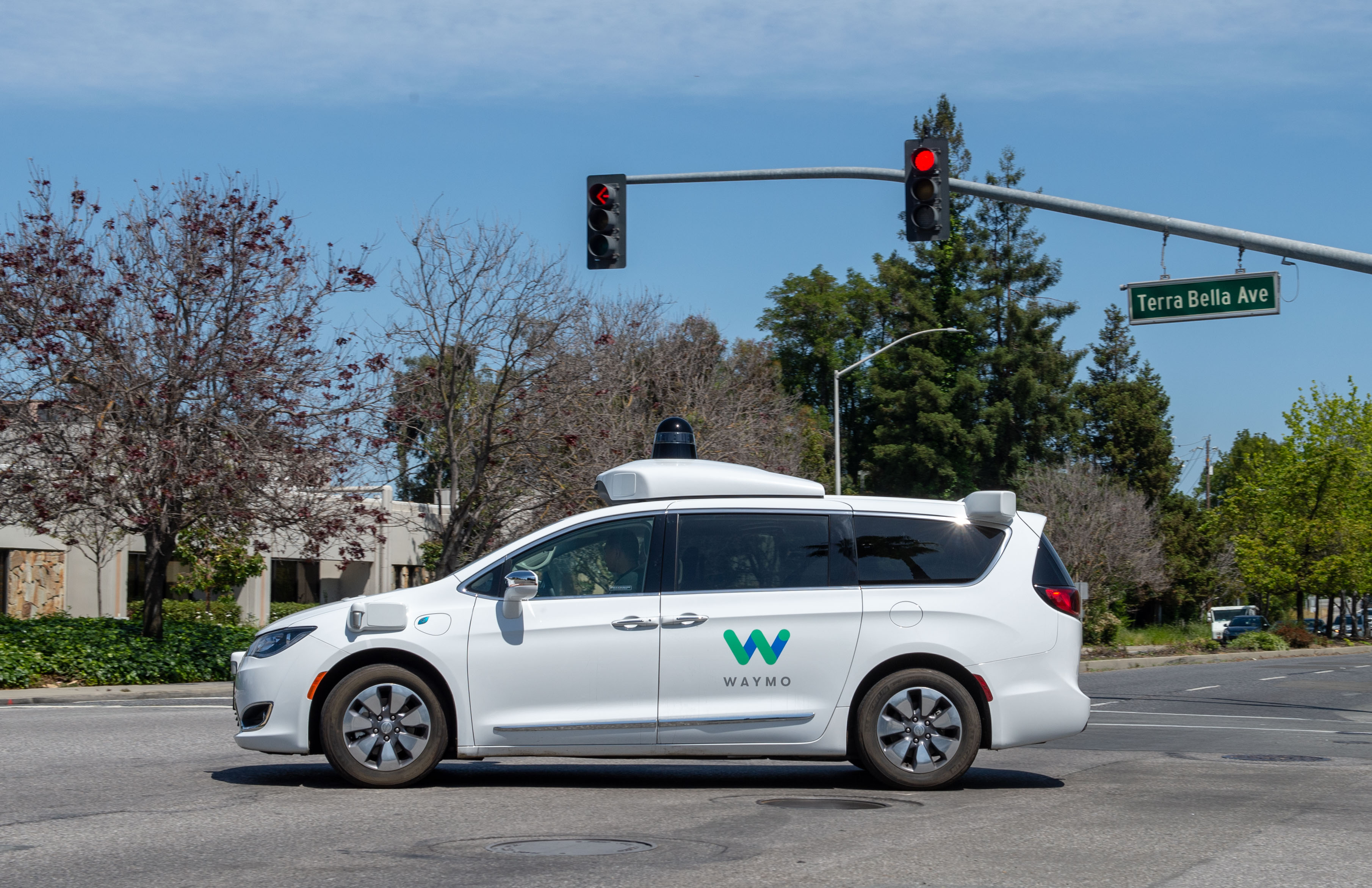 Waymo tested and then launched a robotaxi service in a limited and growing area in the Phoenix suburbs. And while the company has never officially announced it will launch a commercial service in California, its activities over the years all point to that intention. The Mountain View, California-based company regularly tests its vehicles, which includes the electric Jaguar I-Pace, in San Francisco and the surrounding area. The company said it supports Newsom’s recent executive order, but stopped short of endorsing the current language in Min’s bill.

“As the first company to commercially deploy our fully autonomous technology to the public, we strongly support the goals outlined in Governor Newsom’s recent Executive Order N-79-20 which takes a holistic approach to transition California towards a 100% EV future,” a Waymo spokesperson told TechCrunch. “Waymo has business lines and partnerships that span ride-hailing, trucking and local delivery, and we want to ensure that California’s EV policy reflects the myriad issues and industries affected. It’s early in the legislative process, and we look forward to working with Sen. Min in his efforts.”

Industry sources familiar with the bill have noted that the current language, which is fairly brief, is just a placeholder and unlikely to make much headway this session. Those same sources have criticized the sponsors and author for neglecting to specify a plan for charging infrastructure or making distinctions between light and heavy-duty vehicles. Trucks carrying freight are expected to be among the first vehicles with widespread autonomous use. Most self-driving truck development occurs outside of California in regulatory-light states like Arizona and Texas. And while there are some efforts to develop electric and autonomous semi trucks, most testing today involves diesel-powered vehicles. That could prompt companies hoping to deploy in California to lean on the senator’s office to include an exemption for heavy-duty vehicles.

“We’re still looking to fill out details as we move through the legislative process, but UCS’s intention is that this bill stay focused on the electrification requirement,” responded Irvin.