The Aston Martin DBX is the brand’s first SUV — and the stakes for the iconic British luxury car maker couldn’t be higher.

Like Astons before it, the DBX is objectively handsome. Its sculptural form stretches out to unapologetic ample proportions, and stands out in the crowd of SUVs that frequent the private-school pickup lane. It’s an opulent design that scores high on aesthetics, performance and character. It’s also a vehicle that arrives late to the ultra premium SUV segment, and lacks the in-car technology and fuel economy of others of its ilk. Sales of the DBX, which starts at $176,900, began overseas last summer and entered the U.S. market in late 2020. (The version Aston Martin provided to TechCrunch for a test drive had the option-loaded retail price of $205,186 DBX, including delivery fees.)

Call it a tale of two vehicles in a time of dueling principles vying for luxury auto buyer budgets. Demand for SUVs continues to skyrocket, just as the mobility sector inclines sharply toward electrification. Aston Martin set a goal of selling 14,000 vehicles by 2023, a steep hike for a small, boutique brand. However, under new leadership, the company has dialed back those projections to 10,000 as part of its reorganization dubbed “Project Horizon.”

After an underwhelming year due to the pandemic, a new major owner and a new CEO are in place. It’s unclear which narrative will determine the DBX’s fate. The future of the company rests on its success.

Aston Martin said the DBX met sales expectations in 2020, with 1,516 units sold. The company anticipates that the DBX will make up 40% to 60% of global volume in 2021 — its first year of full production.

A tale of two vehicles

How to achieve best-in-class tech in both engineering and in-car experience is a quagmire for low-volume supercar makers who aren’t owned by a larger automaker that can lend that expertise. Aston took steps to solve this problem through an agreement reached with Mercedes-Benz AG to develop engines and electric architecture back in 2013. Tobias Moers, who headed up Mercedes-Benz’s AMG division until last summer, is Aston’s new CEO, a clue on how vital Aston still sees Daimler’s technical performance to its future.

Aston Martin has recently reentered Formula One racing, and true to the brand’s motorsports history, the DBX has sports car-like power, sprinting from 0 to 60 miles per hour in 4.3 seconds, using Mercedes-Benz AMG engines.

On the interior, the DBX scores high as a total sensory experience to drive (and floss in), affording its passengers panache and comfort, all swathed in Bridge of Weir leather. There are nifty options such as a snow pack, complete with a ski boot warmer. 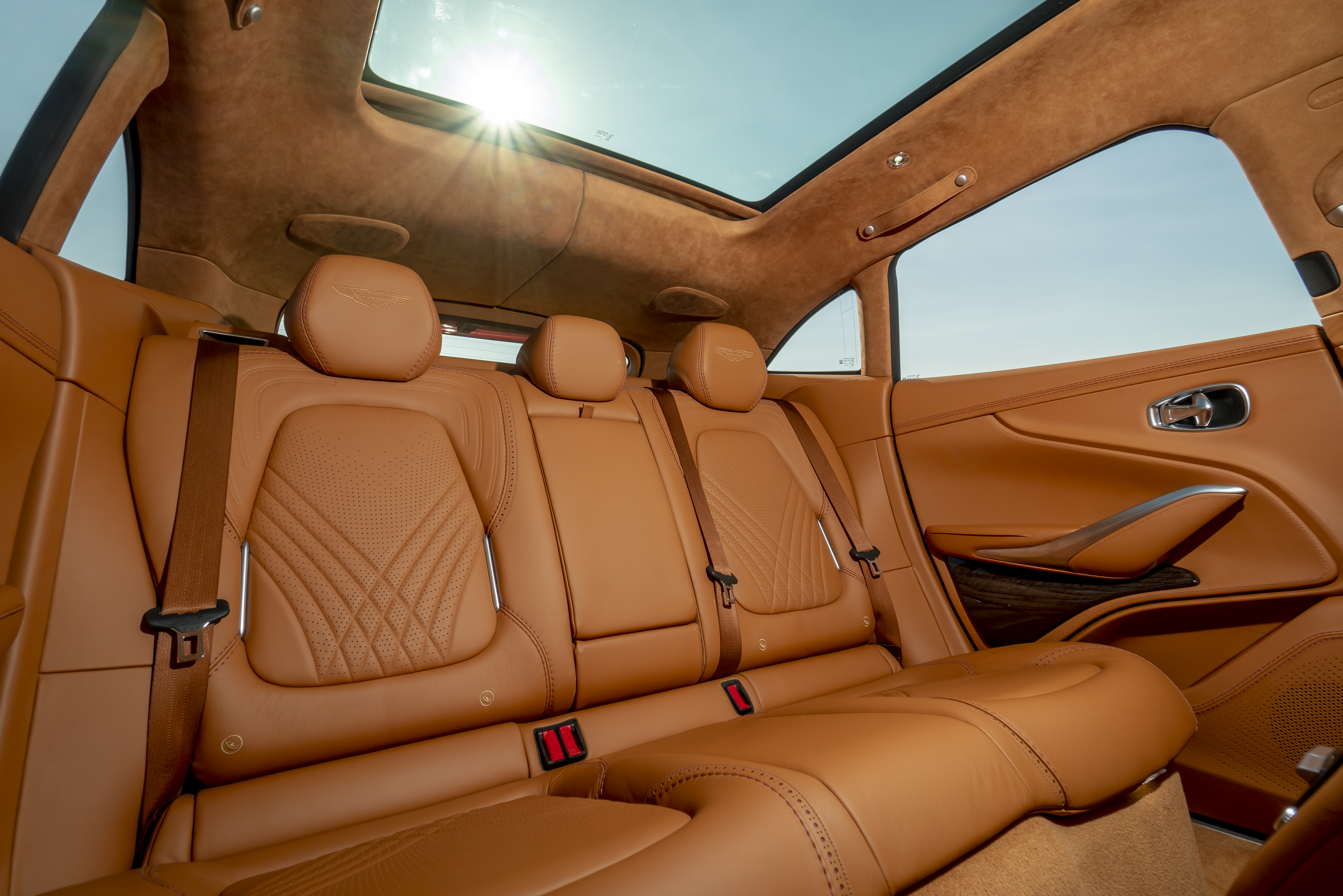 The other half of this product’s interior story raises more pragmatic questions about the role of in-car tech in the super luxury segment, and gets at the crux of Aston’s dilemma. Aston will always be at least one generation behind the latest Mercedes advancements. For a vehicle with a starting price of $180,000, cars that cost half the price have more advanced in-car features.

The Aston Martin DBX is equipped with COMAND, an infotainment system that Mercedes introduced in 1998, refreshed in 2014 and updated again in 2016. When it comes to tech, a few years feels like a lifetime.

The challenge is that it’s not as simple as replacing a head-unit, Nathan Hoyt, a spokesperson for Aston Martin, told TechCrunch.

“The car would need to be revised to work a whole new electrical architecture” he said. “That said, the closer alignment we previously announced between Mercedes and Aston Martin means we will continue using MB technology for the foreseeable future.”

While Aston Martin is saddled with an older system, Mercedes-Benz has since moved on to MBUX, a new more technologically advanced infotainment system that was introduced in 2018 and has already been updated. No word on when MBUX will find its way to Aston Martin products.

In practical terms, that means a 2021 luxury vehicle that’s missing a touchscreen. What’s in its place is far too much clunky plastic to be called classic analog, which perhaps would make more sense. Think Mac keyboard, circa 2014. Apple CarPlay is standard on the DBX, but it lacks Android Auto. 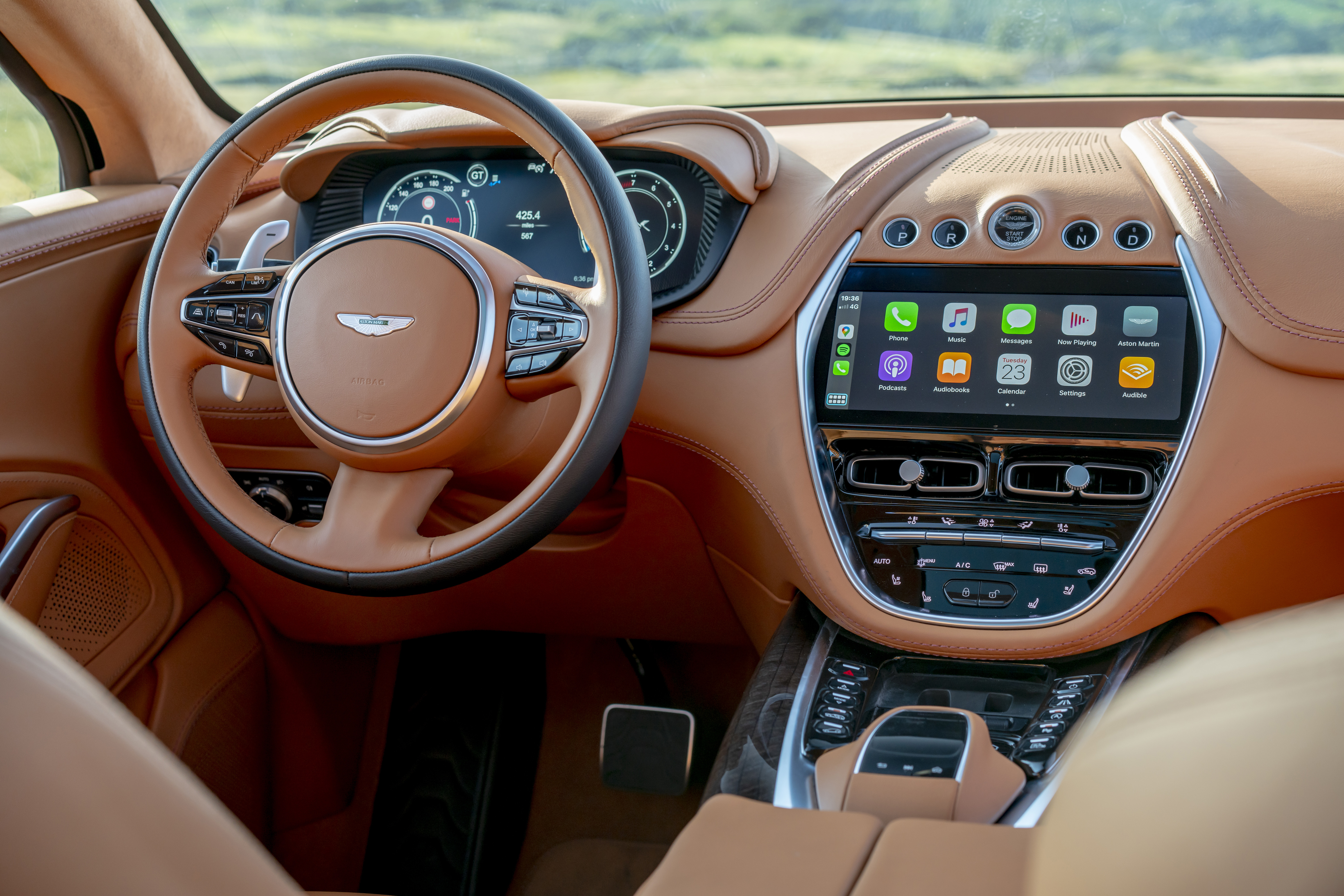 Instead of slick knobs, there are plastic buttons that seem out of step with the rest of the vehicle’s swanky naturally sourced woods. Plastic is also present on the air vents and gear selector.

In fairness, the everything-but-the-kitchen sink isn’t the best solution to in-car technology. Many carmakers have far too much frustrating and tactile tech on the dash that isn’t intuitive. 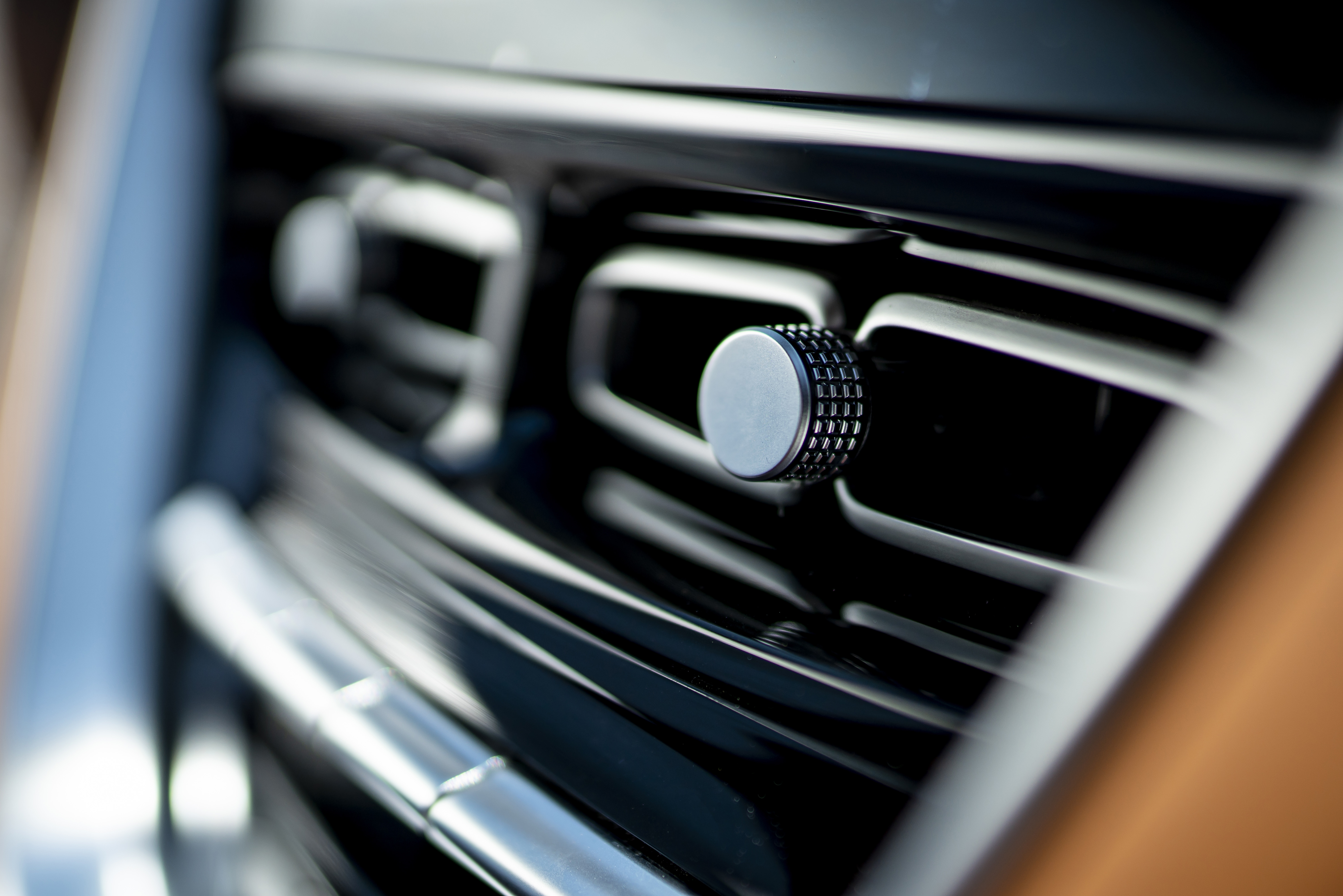 The tech that stood out

Aston’s done what it can to make DBX’s inner working distinct from the traditional Mercedes system. Creative thinking shows up in the 10.2-inch display’s slick graphics made for DBX on the center stack. A DB5, James Bond’s vehicle of choice, is used as an icon to indicate adaptive cruise control activation.

Aston manages to use the tech that it does have to its advantage — and it’s a whole mood.

Ambient lighting offers 64 different colors in two zones and a sound system that feels of the moment. The custom sound system boasts 790 watts over 13 speakers and a sealed subwoofer, and noise compensation tech that drowns out road noise. The combination of that cushy cabin and the boom of those speakers makes it feel as if one is driving around in a high-end theater, back when we all went to the movies, or if you’re an Aston owner, escaped into your personal home theater.

Each function is housed in one of the aforementioned plastic buttons. Adaptive cruise control is on the left of the steering wheel, and can be adjusted to monitor distance and speed. The lane-keeping assist button is on the right of the center console.

The controls on the center console require the driver to glance down for a brief moment, causing the eyes to flit off the road. When lane-keeping assist is engaged, a light on the dash and a gentle twitch of the wheel alert the driver. Other switches control driver performance and Aston’s air suspension settings.

Stateside, Aston might be limited to James Bond, but for the British car culture enthusiasts, the brand is steeped in emotion, gravitas and significance. I attended the Aston centenary in 2010 in England, where I saw an outpouring of love across the U.K. for the brand’s heritage.

Under former CEO Andy Palmer, Aston was in pursuit of its future. A more modern factory in Wales was built to make DBX. But part of Aston’s intrinsic appeal is that some components are still hand built to suit the low-volume connoisseur of a few thousand-of-a-kind vehicle. As cars become more complex computerized systems, hand built becomes more of a liability.

The DBX’s path comes down to what the prospective driver wants and needs this vehicle to be in place of proper high-six figure dream machine such as the Rolls-Royce Cullinan owned by the BMW group, or Bentley Bentayga, Lamborghini Urus and Porsche Cayenne, which fall under the collective VW umbrella. Or Tesla, which is Tesla. 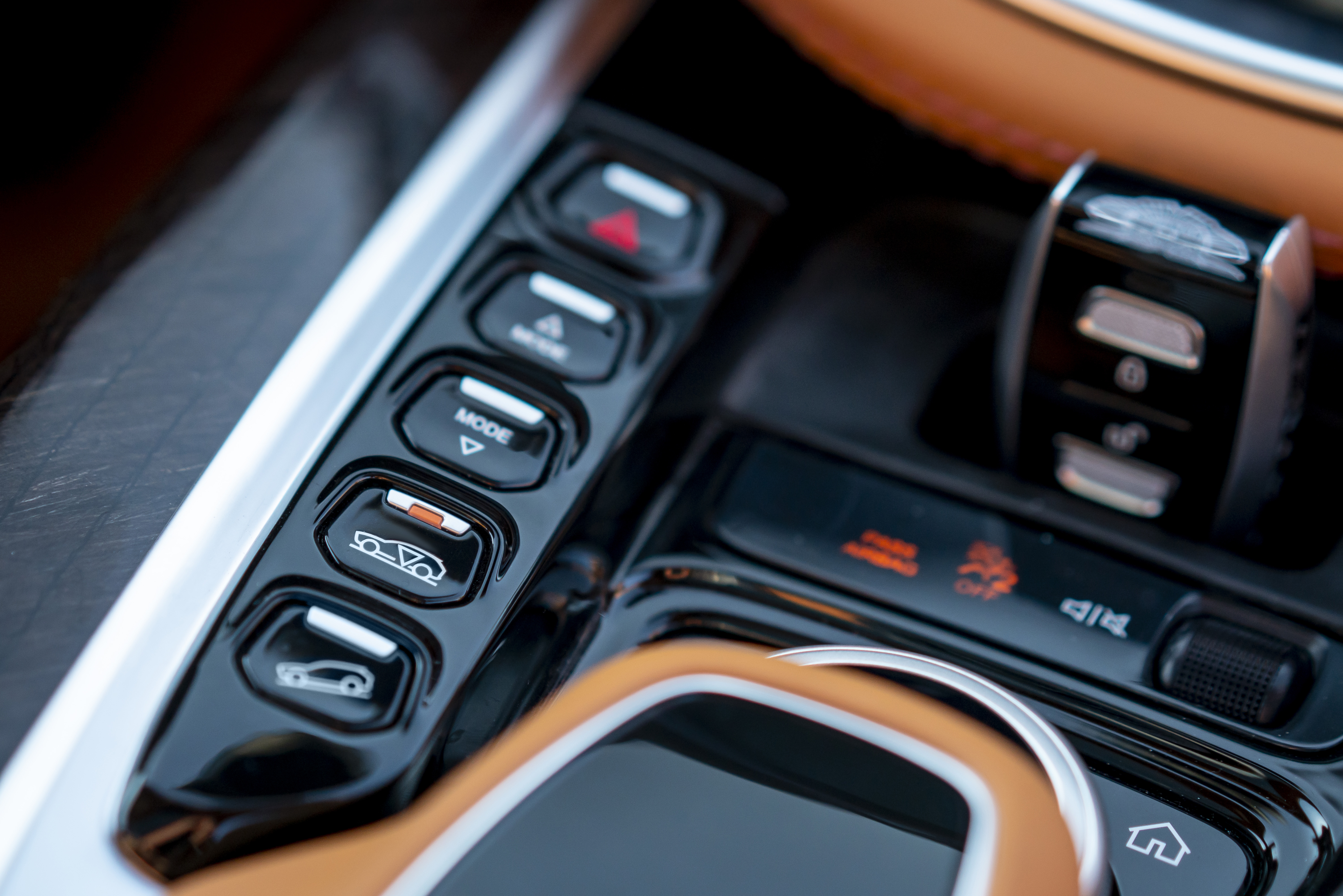 As slick technological features become more important, Aston Martin may need to rethink how it solves for lagging behind. That may mean doubling down on what it means to be unapologetic and classic. Or using future powertrain variants to push the 21st century automaker messaging. The latter seems most likely.

A 2020 agreement with Mercedes that builds off of an existing partnership will give Aston Martin access to a wide range of technology, including electric, mild and full hybrid powertrain architectures through 2027.

Aston Martin indicated in its latest earnings call that offering a hybrid SUV will be important for the company. Tobias Moers, Aston Martin’s new CEO and the former head of Mercedes-Benz AMG, said a plug-in hybrid DBX will be offered before 2024. All-electric vehicles are part of the company’s plans as well, and have been targeted for middle of the decade.

The question is whether Aston Martin will give the infotainment system the needed upgrade to match the hybrid and EV tech.

When it comes to high-six figure SUVs, the air is thin at the top. 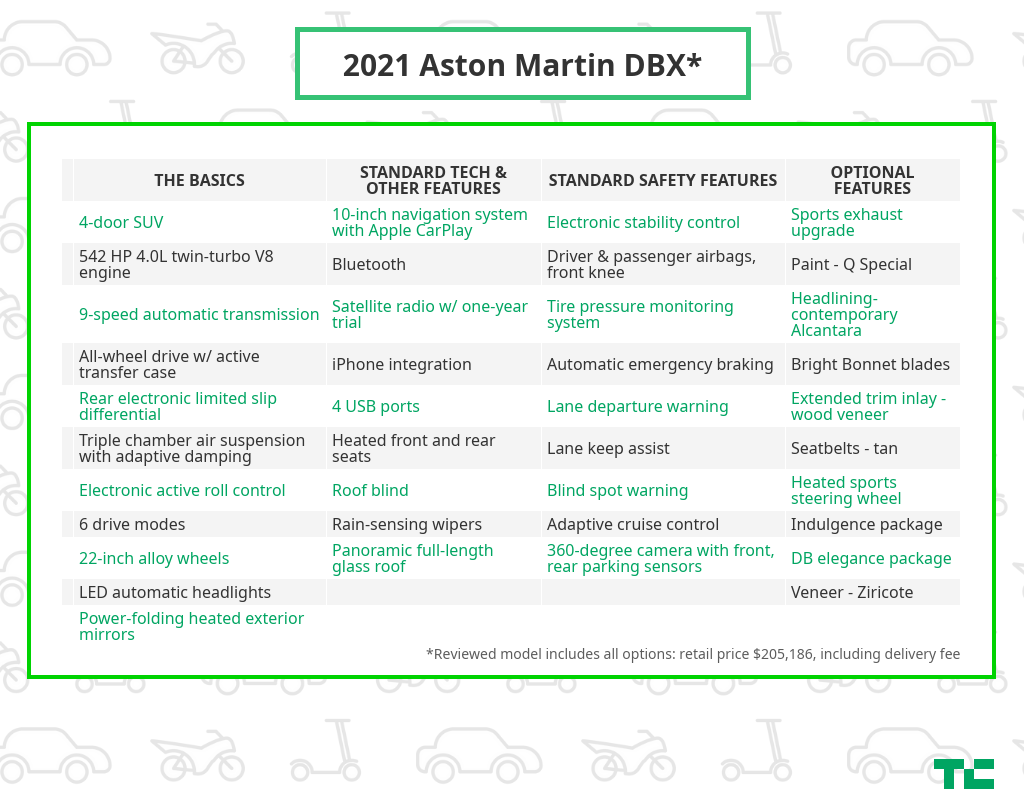