Live events in the age of Covid-19 have largely been moved into the virtual world: we buy tickets (or simply click on a link), go to a site or app, and watch the action unfold on a screen. Your seat or mine might be just as good as that of any other audience member, but these affairs also leave a lot to be desired. Today, a startup called Looped that’s trying to build a livestreaming event service that is more engaged and interactive is announcing some funding to see how it can fill that gap.

The startup, which powers music concerts, comedy and other entertainment, has closed funding of $7.7 million, money that Faisel Durrani, co-CEO of Looped, said in an interview will be used to continue building out the company’s technology stack. It has now raised $8.8 million in total.

The funding comes on the heels of a strong year for the company, which was founded in October 2019 and has since launch seen some 300,000 people buy virtual tickets to join events led by some 1,000 creators on its platform. Stars have included Billie Eilish, Shawn Mendes, BTS, Kevin Durant, Aaron Rodgers, Russell Wilson, Lamar Jackson, Baker Mayfield, Lin-Manuel Miranda, Usher, Sam Smith, Charlie Puth, Khalid, Dua Lipa, the original cast of Hamilton, and many more.

These creators use Looped to set up and broadcast performances (using Looped’s own tools or integrating with whatever production tools a creator prefers to use), sell tickets and merchandise, create “backstage pass” rooms, initiate conversations between a couple or many people, create “co-viewing” suites for groups to watch something together, and more.

As an example of what you can do on Looped, the Hamilton cast assembled for a charity event called Ham4Change, to raise money for 9 non-profits working on fighting racial injustice. The event, which saw the cast chatting and singing for their audience, raised over $1.1 million, selling 15,500+ livestream tickets and 1,000+ Virtual Meet & Greets with 35 cast members. (One of the screenshots of the event is illustrated here.) 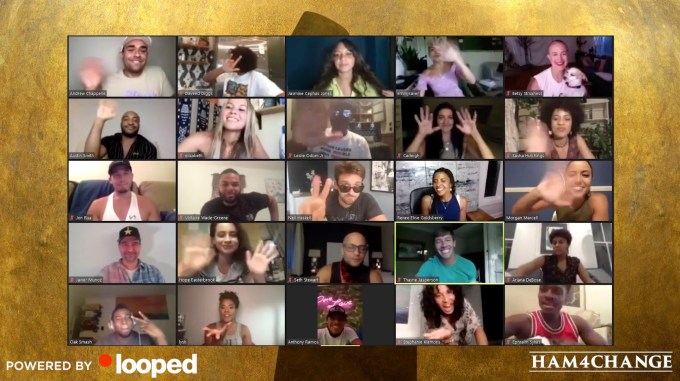 The funding is notable for a couple of reasons.

First, Looped is yet another example of the proliferation of streaming startups and virtual event services that are seeing attention in the market today. In addition to the very obvious and biggest players like Zoom (which is… zooming right now, and also moving into events), there are sizable startups like Hopin and Bizzabo, and smaller or newer tech player like Grip, Welcome, Hubilo, Touchcast, and many others slicing up different segments or aspects of running a virtual event.

Big tech platforms like Google’s YouTube already have a strong business in live streaming massive events, and other online media companies like Pinterest and Spotify are also testing the waters for its users’ appetites for virtual events.

“There are many people playing in this space, which is the good news because it’s the future,” said Durrani, himself a longtime entertainment and music industry executive. “Those that create the most innovation will be the ones that win. The question is: how do we build new products for further engagement?”

Second, the other reason why Looped’s funding is notable is because of who is doing the backing: a 100+ person syndicate of people who are strategic network partners for the startup as it looks to expand the list of creators who use it.

“I have always been driven by innovation. The underlying technology combined with audience interactivity built by the team at Looped forms a truly impressive media platform,” said Gil Goldschein, Former CEO of Bunim/Murray Productions, in a statement. ““This type of intersection between media and technology is the way of the future.”

“Looped is an absolute game changer. It provides so many great opportunities for artists to connect with fans while they’re off the road, and to create new hybrid experiences while touring as well,” said AJ McLean in another statement. “This platform is going to be a staple in fan interaction for many years to come.”

That network of investors may sound a little noisy and highlight how party rounds can find companies without dedicated avocates or close advisors, but in this case Durrani said it’s done intentionally for the purposes of improving its network.

“The biggest hurdle right now is still one of adoption,” he said, with virtual events nowhere near the scale of activity as that of a typical performer on a tour. In fact, many artists have pulled away from performing almost entirely in the current climate: they too face “Zoom fatigue” and there is a hesitation too about flooding the market too much right now.

“This space is still fairly new, and we’re all going through a difficult time in this pandemic where we are having screen exhaustion. It means that many people are eager to get back to the old ways rather than embracing what will be the new world as we move forward.

“I am a believer that the virtual event business will be part of the portfolio as we move forward, but we’re still just on the cusp of it.” He added that a recent Goldman Sachs survey of consumers found that 74% said they would continue to consume content virtually even after the pandemic has passed. Encouraging numbers for Looped and many others, I’m guessing.

For the more usual suspect VC investors, they see in Looped a company that, by virtue of its specialization on entertainment events (similar to how Touchcast is specializing on corporate events) it has a strong play to make here.

“In a crowded virtual venue market, Looped clearly stands out from the pack. Their focus on product innovation sets them apart, and it’s enabled them to establish industry-leading talent, partners, and traction,” said Brian Reilly, Managing Partner at Will Ventures, in a statement. “Their products will change how creators engage with their fans by increasing access and facilitating authentic connections. We’re excited to support Looped in their mission to bring creators closer to their fans all over the world.”

It will definitely be worth watching, especially as huge tech companies like Apple, Spotify, Google continue to eye up the space and look for leaders among startups that can help them build out their own offerings and connections to artists and creators.