As building in public continues to gain popularity with early-stage startup founders, Murmur, coming out of stealth today, wants to leverage that natural transparency to a louder frequency.

Founded by Aaron Dignan, Murmur helps startups create work agreements based on the policies of other startups. “Work agreements” is an intentionally broad phrase, but encapsulates everything that a team decides about how work works, from paternal leave strategies to strategic priorities to how hiring works.

“It’s everything you’ve ever argued about [within your startup],” Dignan said.

It requires a healthy level of transparency within the ecosystem, meaning that a startup would have to be open with sharing its policies to the public in the first place. But, if Murmur works, it could help early-stage founders save time on the pain-staking process of figuring out how to build policies from scratch around hiring, OKR goals and vacation policies.

Instead, a new founder could just rely on other, seasoned founders, who have shared their policies for anyone to enjoy, and customize their own plan based around those practices.

The 10 benefits and policies any modern workplace should have

Today, Murmur announced that it has raised $1.8 million to scale its working agreements platform in a round led by Lerer Hippeau, with participation from SemperVirens, Human Ventures and Remote First Capital. Other investors include Steve Schlafman, Mariano Suarez-Battan (the CEO of Mural), Brian Sugar (the CEO of PopSugar) and Adam Pisoni (the co-founder of Yammer).

The company, still in private beta, will be launching to the public in early summer 2021.

Murmur is a web-based platform that allows startups to author, customize and plan policies that will shape a team’s culture. The platform helps teams go from proposal to decision with features like voting, edits and feedback throughout the process of creating an agreement. Instead of pushing a copy and paste of another startup’s policy, Murmur prompts founders to use the outsourced policies as seeds, and add customization as they go.

“Anybody can Google and find some company’s years-old processes; the trick is in making an inclusive ‘agreement’ with a real team all participating [and] the magic of keeping it and iterating it, and improving it,” Dignan said. 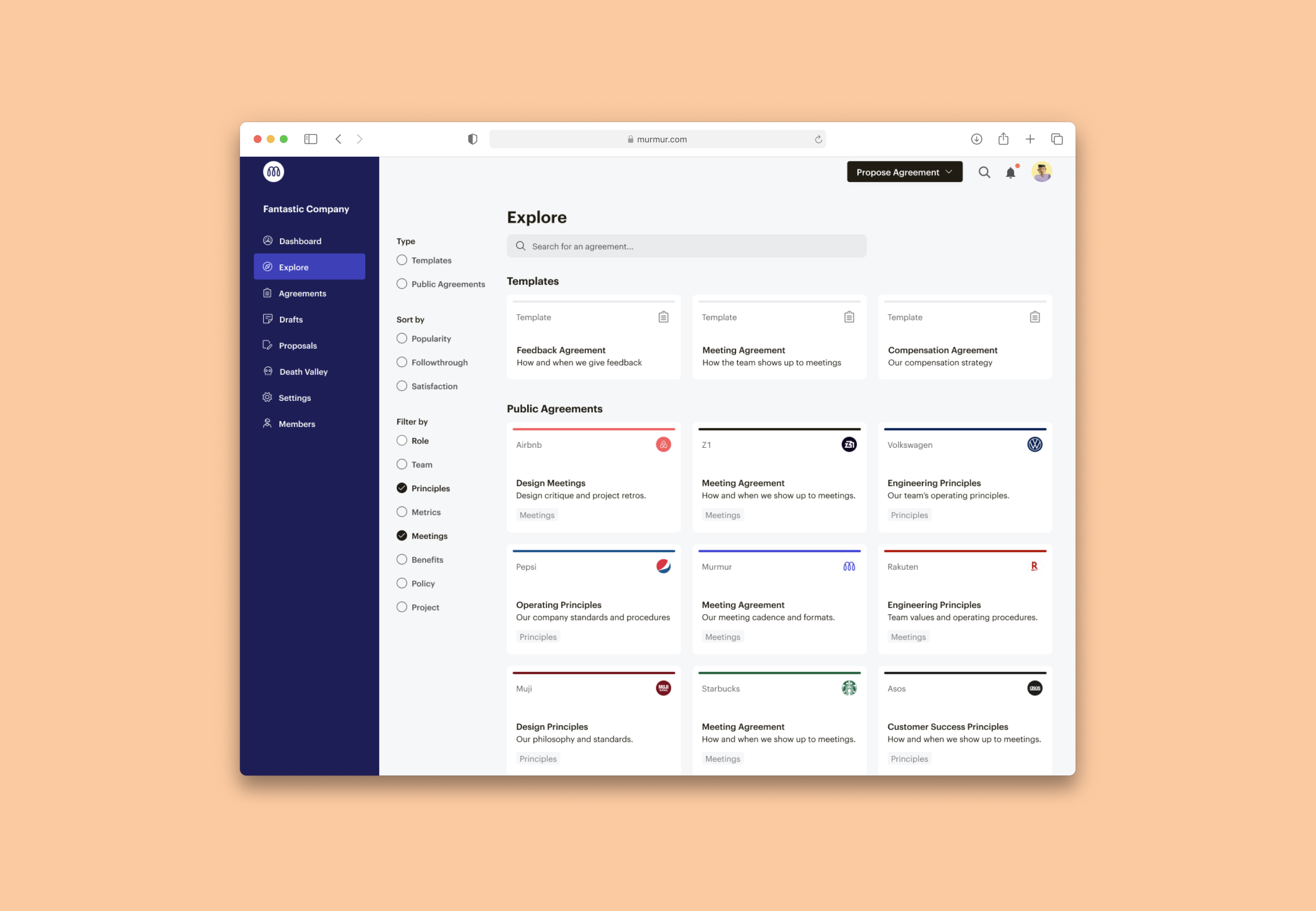 Right now, it is free for anyone to see listed company public agreements. But it costs money to use the Murmur platform to create and customize your own agreements off of this information. With this format, you can see that Dignan thinks that the conversion power of the company lies more in its platform than the content.

Dignan tells me that the team is still testing pricing strategies, but the current plan is a free trial followed by a monthly per-seat fee of $12 to $15 per month, per user. One day, companies could charge a premium for a “kit” of tools on their platform.

Murmur’s initial target for customers are startups that are growing fast and already work in public, such as Buffer, Basecamp, Lattice and Blinkist, but in the future, big enterprises could also see it useful.

Murmur is launching amid a general trend of companies that are pitching themselves as best-practices-as-a-service. Companies in this space aren’t simply enabling other startups to use a fancy SaaS tool, they are not-so-gently pushing them to use those tools in the best possible way for the best possible outcome. Murmur, if it hits scale, could help the next generation of startups figure out the best way to start companies.

Dignan says that the startup “aims to do for working practices what GitHub did for code.”

Remote work is obviously a key catalyst for the company, since the transition has reminded teams that transparency, standards and communication is vital to a functioning organization.

While the startup currently only has Murmur working agreements on the platform, it plans to onboard the agreements of dozens of companies in the coming months. Even though the platform is what makes Murmur special, it’s clear that curating agreements from top companies plays a vital role in Murmur’s success.

It is not paying companies to publicly list their agreements, and the branding benefit of transparency is well worth the confidentiality cost of sharing due to recruitment benefits.

Dignan says connections from his book about the future of work will help land those agreements. Writing a book about a changing world of work before a global pandemic turned everything upside down is ironic, but Dignan, it appears, doesn’t view Murmur as a pandemic pivot.

“I’ve been thinking about this tool for seven years,” he said. But he didn’t think an opinionated tool would have a large enough total addressable market, and that anything that would scale would just reinforce the status quo. He didn’t build Murmur for a while because he thought that the ecosystem didn’t need “yet another customer engagement tool.”

So, he waited. And the pandemic, another peak of the Black Lives Matter movement and the election happened within one year.

“It was all signaling that the complexity is too much,” he said. “We need new ways of working, making decisions and organizing as people. And that felt like this huge moment where we plant the seed and in a few years’ time, the market will be huge.”