You might call Cappuccino the anti-Clubhouse, but the company has been iterating on its app concept for a couple of years — its CEO doesn’t have any strong opinions on Clubhouse. And it’s true that Cappuccino is an interesting social app on its own. It has been attracting a loyal user base, especially after a TikTok video went viral.

The startup says it is building an app that helps you record podcasts with friends. Many people have discovered podcasts over the past few years. Podcasts let you subscribe to audio shows and listen to episodes on demand.

At first, people subscribe to podcasts because of their interests. But if you talk about podcasts with your friends, they’ll tell you that they like a show in particular because of the personalities of the hosts.

Listening to a podcast is a content consumption experience that feels like nothing else out there. You might watch all videos released by a particular YouTuber and you might think you know a lot about someone’s personal life by following them on Instagram.

But listening to someone for hours at a time with earbuds in your ears is a very intimate experience. When a podcast works, it feels like you’re sitting in a room with a few friends and just listening to what they have to say.

And yet, chances are your favorite podcast hosts are not your friends.

This is where Cappuccino fits. The app lets you create groups with your friends or your families. Members of the group can record a short audio message — a bean, as the startup calls it. They talk about what’s on their mind for a couple of minutes. The next morning, group members receive a notification saying that your morning cappuccino has been brewed.

While Cappuccino is a social app, it is focused on your close friends and your family. You aren’t trying to get more followers and you are not sharing public posts. Everything is private by design and focused on groups of real-life friends.

In many ways, it reminds me of Snapchat’s group stories. But Snapchat wasn’t the main inspiration for Cappuccino — it was podcasting. I talked with the company’s co-founder and CEO Gilles Poupardin about the origin story of the app. Cappuccino isn’t Poupardin’s first startup. He had worked on Whyd for several years and lived the full startup experience — he raised founding rounds, chose to pivot, attended Y Combinator in the Bay Area, parted ways with his company’s CTO and chose to shutter the startup.

Among other things, Whyd worked on a voice-controlled connected speaker before Amazon’s Echo product lineup and Google’s Nest speakers really took off. It’s hard to compete with tech giants, even harder when you’re competing on the hardware front.

After that, the Whyd team worked on a service that lets you create your own voice assistant. That didn’t really take off as expected either.

During the summer of 2019, Olivier Desmoulin reached out to Poupardin. Back then, Desmoulin was heading design for Jumbo, an app that helps you stay on top of your online privacy.

“At the time, I didn’t know if I wanted to start a company again — I pivoted 15 times [with Whyd],” Poupardin told me.

But they started discussing about podcasts and AirPods — and audio at large — as the next frontier for social apps. The basic premise was simple. A lot of people were listening to podcasts, but very few people were creating their own podcasts.

There are three reasons why your neighbor doesn’t have its own podcast but sometimes posts stuff on Instagram and Snapchat:

With Cappuccino, the idea is to take a reverse stance on these three points: short content, easy to record and personal. It’s supposed to be a better experience for both people recording audio and people listening to audio.

The first version of Cappuccino isn’t an app, it’s a side project. “We created a group on WhatsApp, we invited 10 to 15 people and we asked them to record voice memos and send them all to Olivier,” Poupardin told me.

Every night, Olivier Desmoulin would fire up GarageBand and create a mix of all voice memos. In the morning, he would send a message to the group conversation on WhatsApp and write: “Hey, your cappuccino is here.” 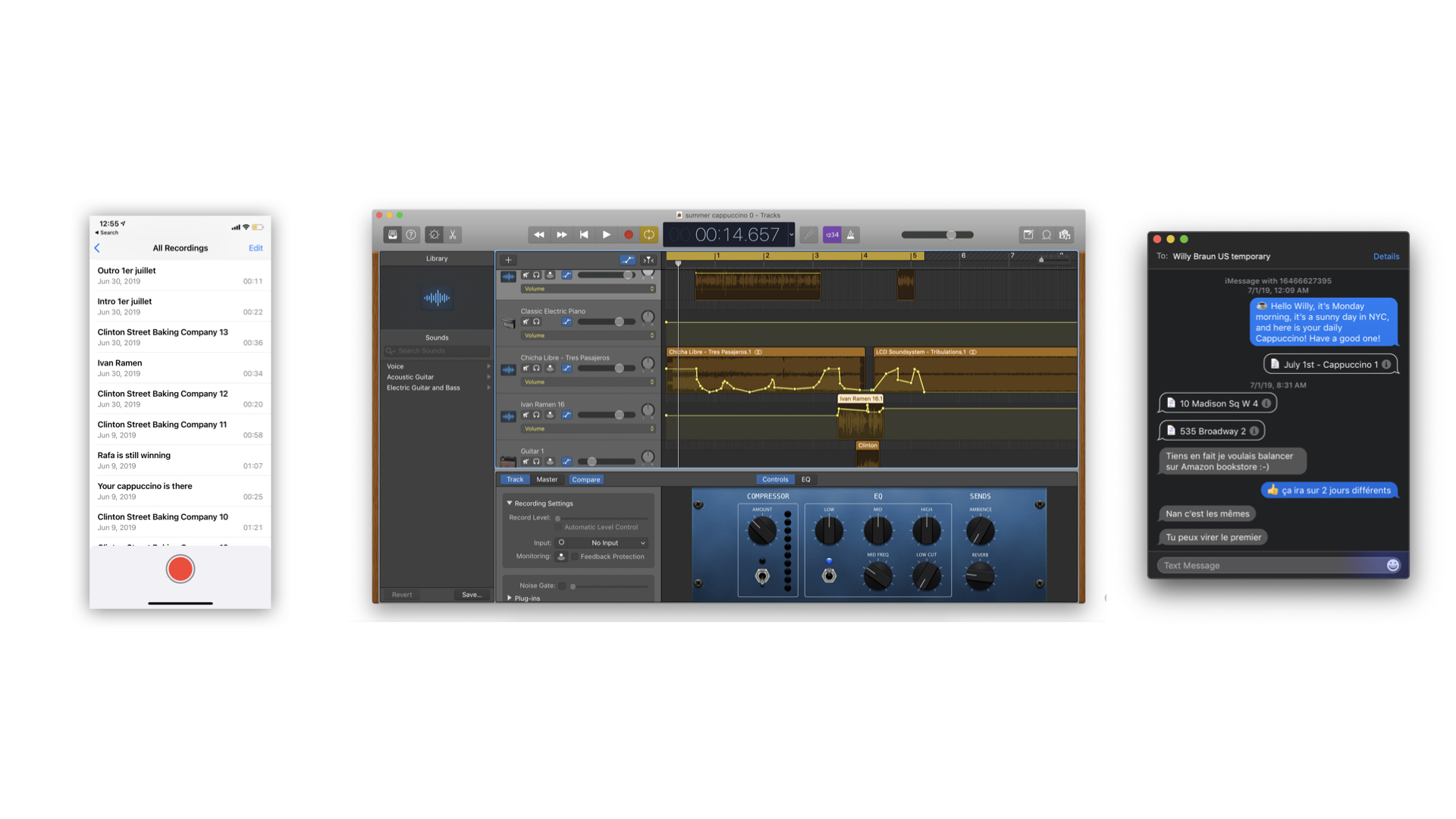 After getting some positive feedback from group members, Pouparding and Desmoulin chose to move forward and create something that feels more like an app. But they both knew that creating a social app was incredibly hard when it comes to attracting users. They developed something quickly so that they weren’t wasting time developing something that nobody would use.

“We built the first version of the app in four days by using a hack — we were using Airtable as the backend service,” Poupardin said.

Gawen Arab who was the CTO at Whyd teamed up once again with Poupardin, proving that time is a flat circle. He’s now co-founder and CTO at Cappuccino.

Letting people talk about you

The Cappuccino team hasn’t been active when it comes to press relations or ads. It’s been a slow build up with some interesting spikes.

Last summer, Product Hunt super user Chris Messina created a post about Cappuccino. It was a bit of a surprise as the startup wasn’t trying to get featured on Product Hunt. Still, the co-founders diligently answered questions from the Product Hunt community.

The following day, Product Hunt’s newsletter featured Cappuccino. It was titled “The next big audio social network?” That brought some new users to the app. 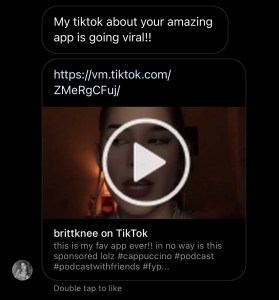 But things really started to take off when Brittany Kay Collier shared a video on TikTok about Cappuccino a few weeks ago. She sent a direct message to Poupardin on Instagram, telling him that it was attracting a lot of views. The video ended up attracting around 3.8 million views and 850,000 likes.

Two days later, Poupardin sent her a job offer to join the team. He was secretly hoping she would say yes, and she was secretly dreaming about getting a job at a company like Cappuccino.

this is my fav app ever!! in no way is this sponsored lolz #cappuccino #podcast #podcastwithfriends #fyp #greenscreenvideo

Over the past couple of weeks, Cappuccino attracted 225,000 new users. They created 130,000 groups and sent around one million audio stories.

When the team is reading public posts about Cappuccino on Twitter, it feels like the app has found its core user base. The most loyal users seem to be young women in their twenties. They want to keep in touch with long-distance best friends.

They might be graduating from college and moving to a different part of the country. They might be stuck at home because of the current pandemic.

And it seems like new users have no issue hitting the record button and telling stories — everybody is familiar with voice messages on WhatsApp and iMessage after all.

“Something that is interesting with audio messages as a medium is that you tell different stories from what you would tell by taking a photo for Instagram, sending a Snap or creating a video on TikTok,” Poupardin said.

But what about the elephant in the room then? Clubhouse has topped 8 million downloads already. Poupardin listed all the differences in social graph, audio format and user base. According to him, there’s enough room for multiple audio apps.

“With video, you have YouTube, Twitch and TikTok — those are all different formats. Audio is potentially going to follow the same trend,” Poupardin said. Social apps first took advantage of the camera in your smartphone, because the camera was the killer hardware feature. And audio seems like the natural next step.

He feels like he isn’t competing with other audio startups for now. He wants people to wake up and listen to Cappuccino instead of random music on Spotify. “It’s going to help people who feel lonely,” he said.