Relativity Space has just revealed what comes after Terran 1, the small launch vehicle it hopes to begin flying later this year. It’s next rocket will be Terran R, a much larger orbital rocket with around 20x the cargo capacity of Terran 1, that will also be distinguished from its smaller, disposable sibling by being fully reusable — across both first and second stages, unlike SpaceX’s Falcon 9.

I spoke to Relativity Space CEO and founder Tim Ellis about Terran R, and how long it’s been in the works for the space startup. Ellis said that in fact, the vision ever since Relativity’s time at Y Combinator has included larger lift rockets — and much more.

“When I founded Relativity five years ago, it always was inspired by seeing SpaceX launching and landing rockets, docking with the International Space Station, and this idea that going to Mars was critically important for humanity’s future, and really expanding the possibilities for human experience, on Earth and beyond,” Ellis told me. “But all of the animations faded to black right when people walked out [of spaceship landing on Mars], and I believed that 3D printing had to be this inevitable technology that was going to build humanity’s industrial base on Mars, and that we needed to really inspire dozens, or even hundreds of companies to work on making this future happen.”

The long-term goal for Relativity Space, Ellis said, has always been to become an “end-product 3D-printing company,” with its original Terran 1 light payload rocket simply representing the first of those products it’s bringing to market.

“3D printing is our new tech stack for aerospace, and really is rewriting something that we don’t feel has fundamentally changed over the last 60 years,” he said. “It’s really bringing automation that replaces the factory fixed tooling, supply chains, hundreds of thousands of parts, manual labor and slow iteration speed, with something that I believe is needed for the future on Earth, too.”

Terran R, which will have a payload capacity of over 20,000 kg (more than 44,000 lbs.) to low-Earth orbit, is simply “the next logical step” for Relativity in that long-term vision of producing a wide range of products, including aerospace equipment for use right here on Earth. Ellis says that a larger launch vehicle makes sense given current strong customer demand for Terran 1, which has a max payload capacity of 1,250 kg (around 2,755 lbs.) to low-Earth orbit, combined with the average size of satellites being launched today. Despite the boon in so-called “small” satellites, many of the constellations being built today have individual satellites that weigh in excess of 500 kg (1,100 lbs.), Ellis points out, which means that Terran R will be able to delivery many more at once for these growing on-orbit spacecraft networks. 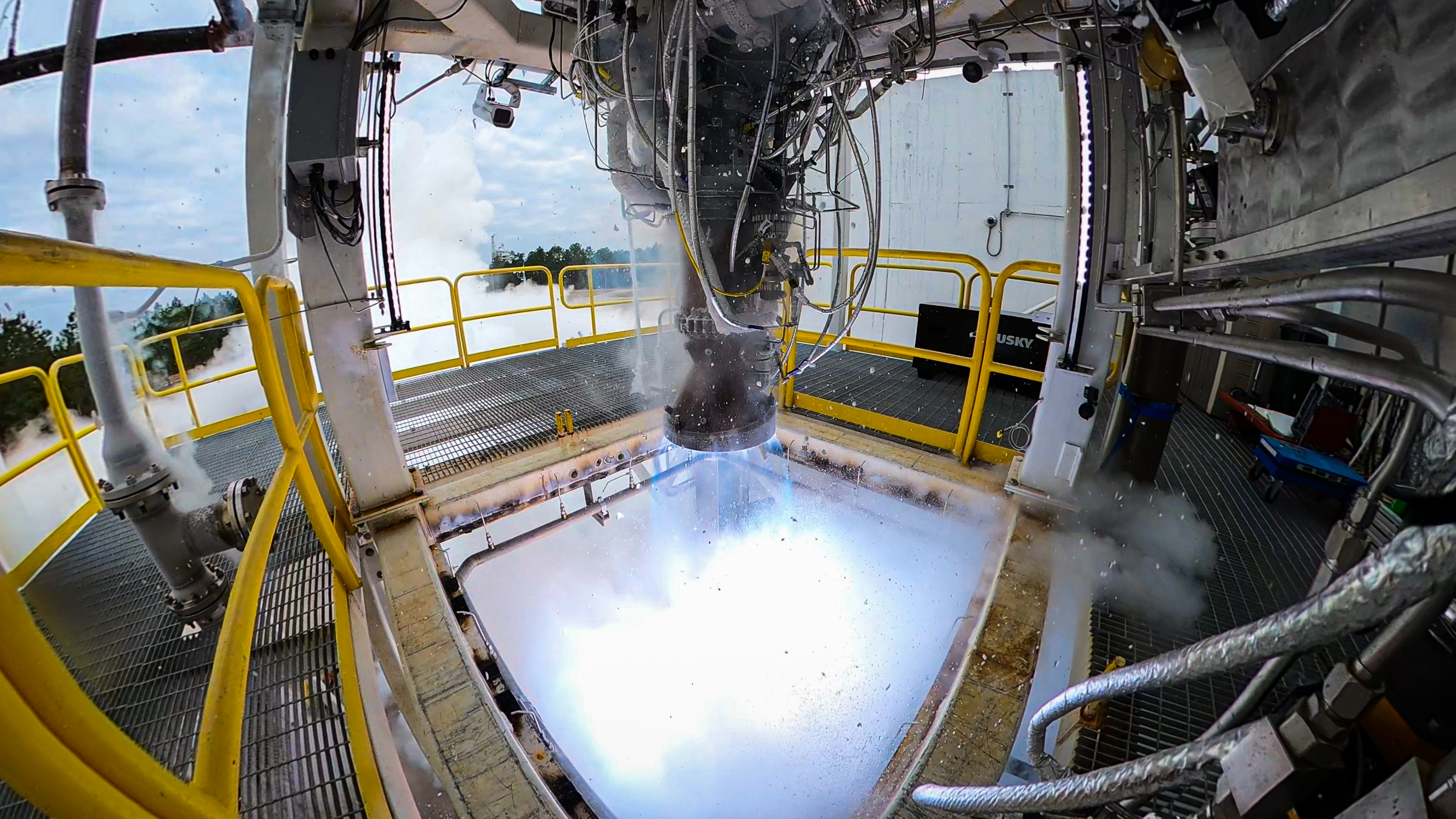 A test fire of the new engine that Terran R will use for higher thrust capabilities. image Credits: Relativity Space

“It’s really the same rocket architecture, it’s the same propellant, same factory, it’s the same printers, the same avionics and the same team that developed Terran 1,” Ellis said about the forthcoming rocket. That means that it’s actually relatively easy for the company to spin up its new production line, despite Terran R actually being quite functionally different than the current, smaller rocket — particularly when it comes to its full reusability.

As mentioned, Terran R will have both a reusable first and second stage. SpaceX’s Falcon 9’s first stage (a liquid fuel rocket booster) is reusable and detaches from the second stage before quickly reorienting itself and reentering Earth’s atmosphere for a propulsive landing just after entering space. The Falcon 9 second stage is expendable, which is the space term for essentially just junk that’s discarded and eventually de-orbits and burns up on reentry.

SpaceX had planned to try to make the Falcon 9 second stage reusable, but it would’ve required too much additional mass via heat shielding for it to make sense with the economics it was targeting. Ellis was light on details about Terran R’s specifics, but he did hint that some unique use of fairly unusual materials made possible though 3D printing, along with some sparing use of generative design, will be at work in helping the Relativity rocket’s second stage reusable in a sustainable way.

“Because it’s still entirely 3D-printed, we’re actually going to use more exotic materials and design geometries that wouldn’t be possible at all, traditionally, to manufacture,” Ellis said. “It’s just too complicated looking; it would be way too difficult to manufacture traditionally in the ways that Terran R is designed. And that will actually make it a much more reusable rocket, and really helped build the best reusable rocket possible.”

Terran R will also use a new upper-stage engine that Relativity Space is designing, which is also unique compared to the existing engines used on Terran 1. It’s 3D-printed as well, but uses a copper thrust chamber that will allow it to have higher overall power and thrust capabilities, according to Ellis. When I spoke to Ellis on Thursday evening, Relativity had just completed its first full successful duration test of the new engine, a key step toward full production.

Ellis said that the company will share more about Terran R over the course of this year, but did note that the existing large 3D printers in its production facilities are already sized correctly to start building the new rocket — “The only change is software,” he said. He also added that some of the test sites Relativity has contracted to use at NASA’s Stennis Space Center are able to support testing of a rocket at Terran R’s scale, too, so it sounds like he’s planning for rapid progress on this new launch vehicle.