Every new smart home device invites new questions. Questions of privacy, security and what we’re willing to give up for the sake of convenience. It’s not an anti-technology stance to welcome these conversations and assess new products as we invite them into our homes.

For my part, my apartment is fairly limited when it comes to smart home tech. I own two large smart speakers and a third smaller one, mostly for the convenience of networking streaming music across different rooms. My smoke detector is connected, for the peace of mind that comes with knowing that my home wasn’t on fire back when I used to leave it for extended stretches. Oh, and a couple of connected lightbulbs, mostly because why not?

Back when Google announced its first-party smart screen, the Home (now Nest) Hub, I thought it was a savvy decision to leave the camera off. Of course, the company included one on its larger Max device, so the option is there, if you want it. Of course, for most of these products, video cameras are a given — and understandably so, with smart screens like the new Echo Show 10 edging into the teleconferencing space as the line between work and home has become far more fuzzy for many. 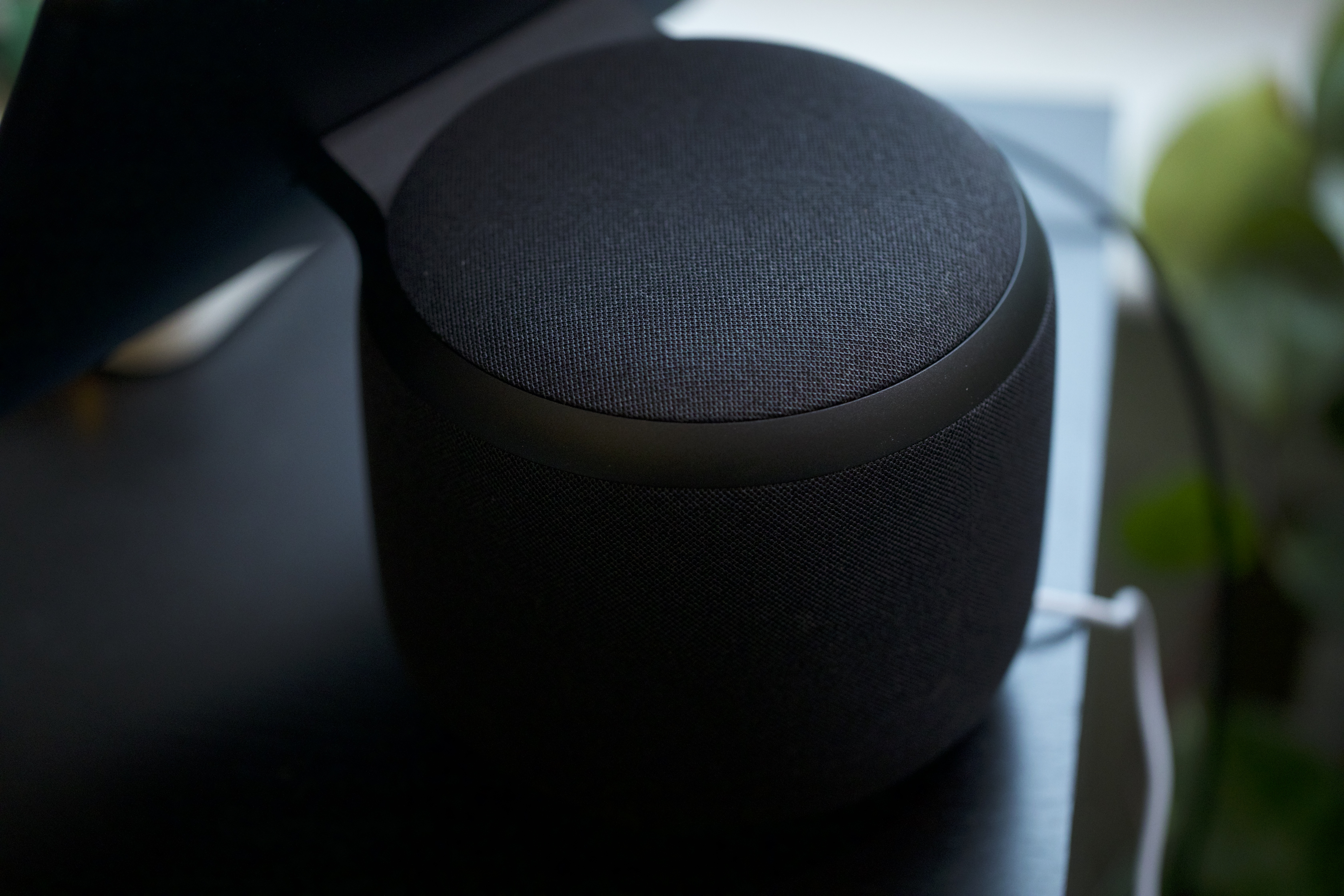 Amazon’s gotten the message here, with the addition of a large physical shutter button on the top of the device. When slid to the right, the camera on the top right is covered by a white lens cap, contrasted against the black bezel, so it’s easy to spot across the room. Doing so will pop up a notification: “Camera off. Disabling motion.”

The “motion” here refers to the rotating screen — the headline feature of Amazon’s latest take on the Echo Show format. The company is positioning the new tech as a game changer for the category, and while I will say it’s done a good job implementing the feature in a way that works well and quietly, it’s precisely this new addition that reignites the privacy question. 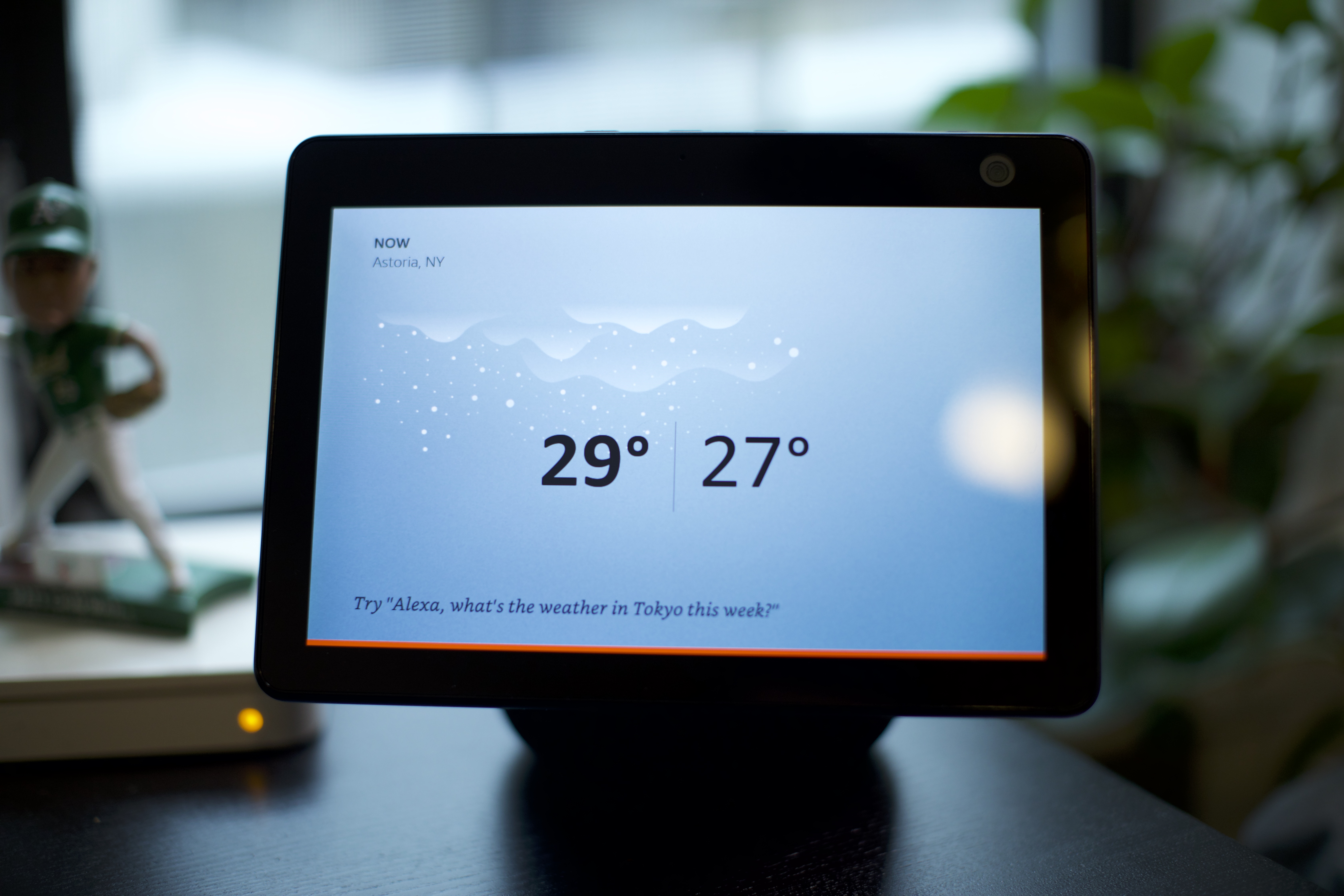 The notion of creating a home device that fades into its surroundings is really out the window with that feature. The Echo uses figure tracking to make sure the display is facing you at all times when using it, drawing attention to itself in the process. One can inherently know and passively understand that a device is using imaging and AI for tracking, but largely effectively ignore it. After all, we’ve got cameras on pretty much everything now. These things are a part of the social media and services we regularly use. When the device physically follows you around the room, however, this stuff is top of mind.

Having used the product for several days, I would say the feature feels unnecessary in most cases — and downright unnerving in some. I’ve placed the Show on my desk next to the computer where I’m typing this, and I’ve mostly disabled the feature. It’s probably something I could get used to over time, but with the relatively limited amount I’m going to spend with it, I prefer to use the product in a stationary manner, manually swiveling the display and flipping the screen angle up and down as needed. I adjust screens all of the time. It’s fine.

Amazon will walk you through the feature during setup, including which direction you want the screen facing as a default and how much rotation it offers on either side. Keep in mind, the system really has no notion of what constitutes “straight ahead, until you adjust the setting sliders accordingly. You can adjust these later in settings, as well. There’s also a “Motion Preferences” option. Here you can limit the applications it will use to follow you, require voice to use the feature or disable it entirely.

Amazon’s new Echo Show 10 follows you as you move

Of course, I’m also someone who prefers to keep the camera shutter on while not in use, so that works out just fine. You can’t shutter the camera and have the device continue to move, since it needs to know what it’s seeing to move along with it. I will say that the moving screen has the unexpectedly nice side effect of reminding me when I’ve forgotten to disable the camera.

Amazon’s understandably — and thankfully — been talking up the privacy aspects since the Echo Show 10 was announced. There are eight mentions of “privacy” on the product page, but here’s the key graf:

Built with multiple layers of privacy controls, including a mic/camera off button and a built-in shutter to cover the camera. Easily turn on/off motion at any time by voice, on-device, or in the Alexa app. The processing that powers screen motion happens on device – no images or videos are sent to the cloud to provide the motion feature. 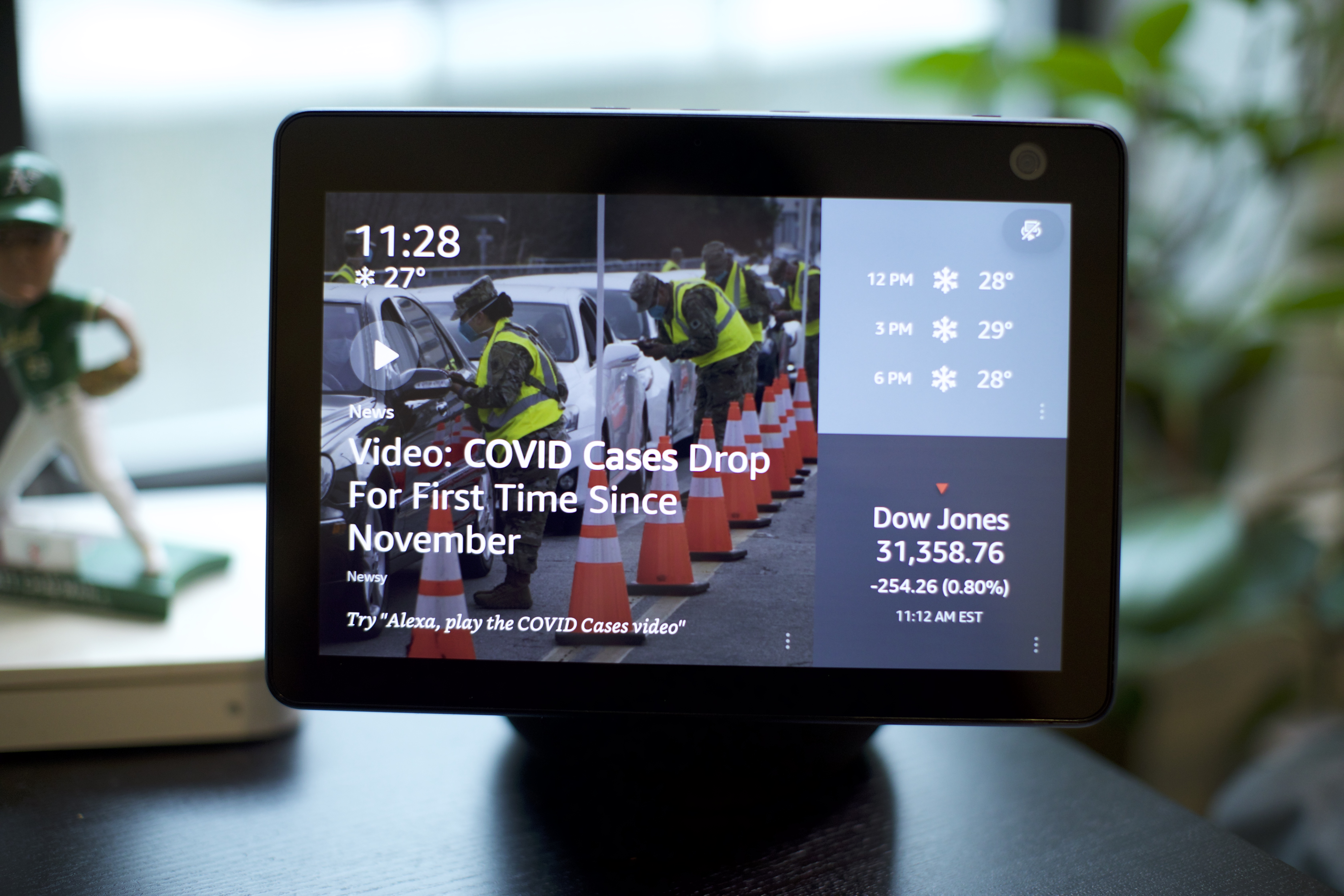 Notably, the tracking feature uses a vague outline of a person, rather than any sort of facial tracking. The image it processes looks more like a blotchy heat map than anything recognizable as an individual or even, generally, a human (though it’s able to distinguish human figures from pets). That, in particular, has been a hot button topic for the company.

The rotating feature is primarily a way to reduce user friction. Amazon notes that existing Echo Show owners will swivel their devices around when they’re, say, using it in the kitchen to cook. The front-firing audio also moves as the screen does. That’s in keeping with the company’s move away from 360-degree audio in recent Echo models. This is either a plus or a minus, depending on how you use the device, and how many people are around. It can also be used to follow you as you move around while video calling (a feature the competition has offered through zooming and cropping).

Amazon’s taken pains in recent generations to improve the audio on these device, prioritizing the “speaker” part of smart speaker, and the new Show certainly benefits from that. I wouldn’t use it as my primary sound system, but sitting here on my desk, it delivers a nice, full sound for its size, even with the screen obscuring a big portion of the front.

The 10.1-inch screen is a nice size, as well. Again, I wouldn’t use it to replace a TV or even a good laptop, but it’s good size for quick videos. It’s a shame Amazon and Google haven’t been able to play nice here, because YouTube has the market cornered on short-form videos that are perfect for this form factor. (If you’re so inclined, you can still access YouTube via the built-in browser, though it’s not exactly an elegant solution.) 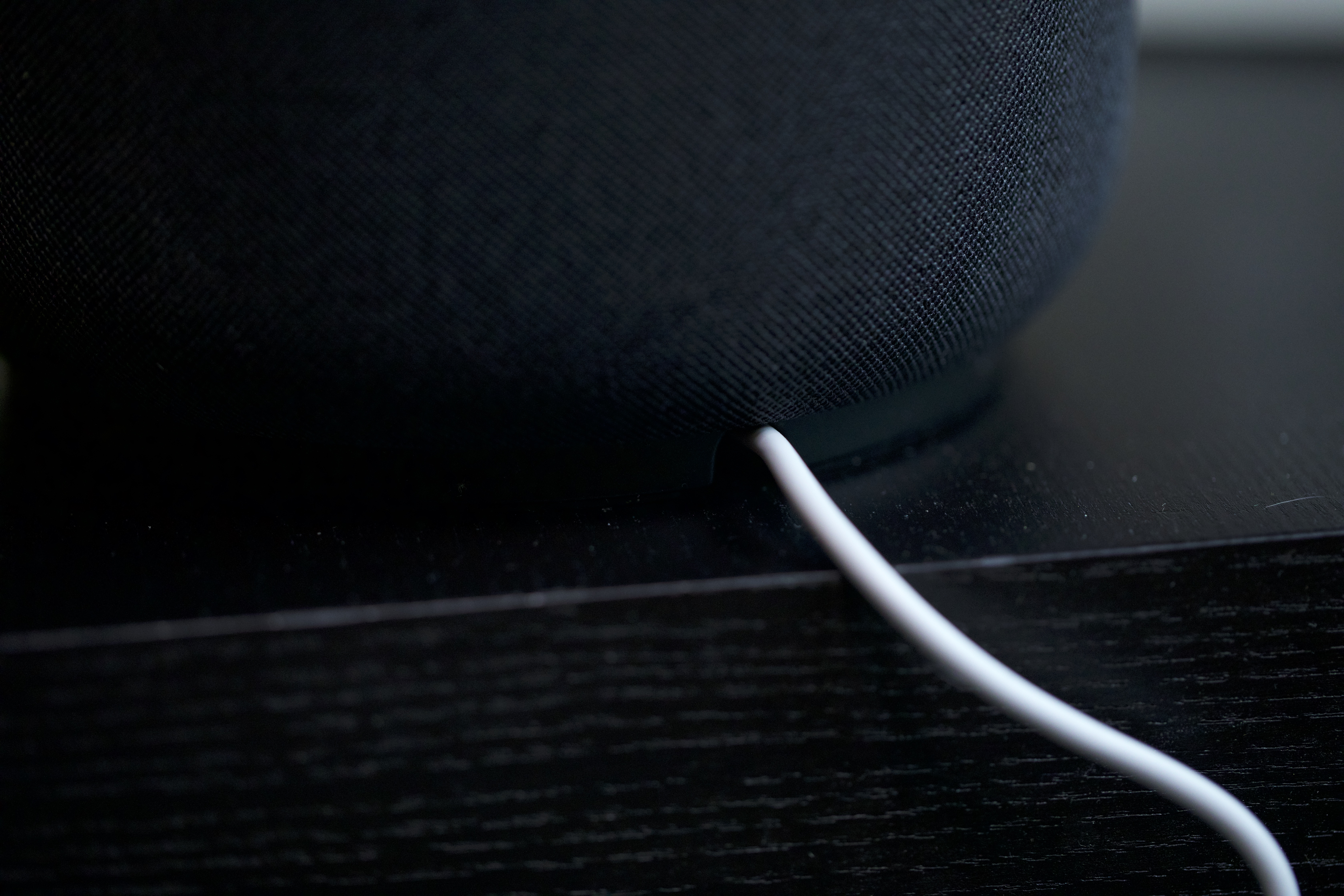 Amazon Prime Video certainly has its share of good long-form content and series (it has a ton of trash, as well, but sometimes that’s fun, too), but Amazon’s best play is partnering with third-parties to bolster its offerings. And that’s another spot where Amazon has been improving the Echo experience. Netflix and Hulu are now available on the device for video, and Apple Music and Spotify have been added on the music side.

There are still a number of third-party apps that would be nice additions, but that’s a pretty solid starting point. Not to mention that services like Spotify can be set as the default for music playback. That’s one of those additions that genuinely reduces friction (and honestly, Amazon Music is a far less compelling service than Prime Video at the moment).

Zoom — arguably the most compelling addition from a software standpoint — is coming later. For now, calls are limited to other Alexa devices and Skype. Zoom and other third-party teleconference software has the opportunity to create an entire new dimension for these products, especially with the aforementioned blurring of home and work life.

Honestly, where the Show is currently sitting on my desk is really the perfect placement to use it for calls while working on my computer. I’m cautiously optimistic about the implementation. At the very least, it would give me a compelling reason to get more use out of that 13-megapixel camera on a regular basis. 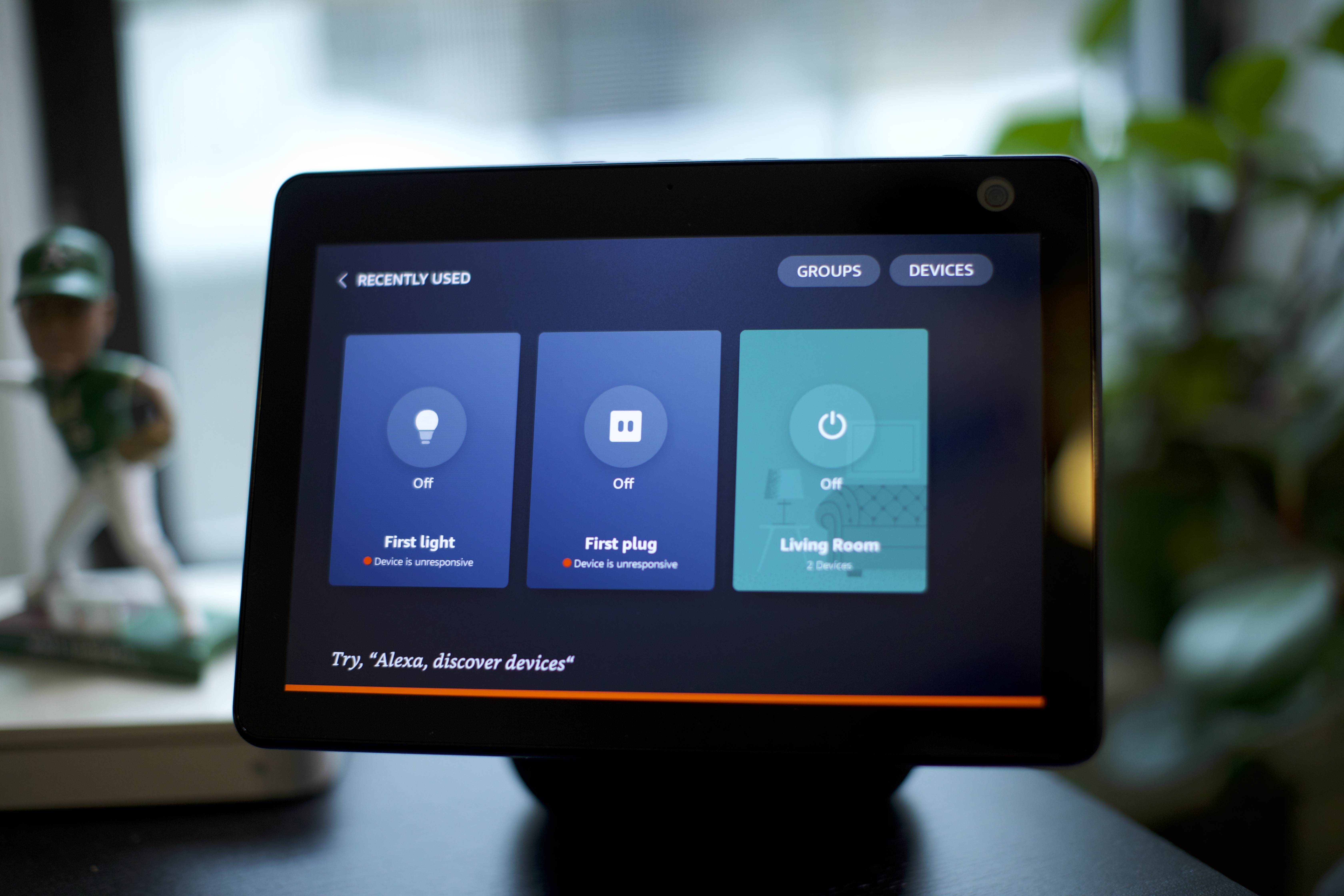 For the time being, I think the most compelling case to be made for both the camera and automatic screen swiveling is as a makeshift security camera. This is another “Coming Soon” feature that requires a Guard Plus subscription. With it, you can set a geofence, with the Show doubling as a smart security camera when you leave home. The system will send an alert if a person is detected in your home while you’re out.

This month has seen rumors that Amazon is working on a wall-mounted smart home hub. The form factor certainly makes sense, essentially serving as an Alexa-enabled touchscreen control for your various connected devices. For the time being, between Show and the Alexa mobile app, I think the bases are covered pretty well — though such a device could certainly lend a more premium experience to the space.

A well-placed Show will address that need for many. Certainly it does the job for my one-bedroom apartment. You can use voice or touch to control lighting, and the screen can monitor feeds from security cameras, including, naturally, Amazon-owned Ring. Additions like these have really made the smart screen category a much more compelling and capable one.

At $249, it’s $20 pricier than the 2018 Show. It’s hard to say how much of the increase is due to the new mechanical turning mechanism, but Amazon offered up a cheaper model without the functionality that’s almost certainly the one I would go for, for reasons outlined above. Again, not everyone will have the same misgivings.

And all told, it’s a well-constructed, nice addition to the Show family and one I don’t mind moving around the old-fashioned way.