Miami-based AdMobilize and its spin-off, Matrix Labs, announced this morning that they are being acquired for $19.5 million. The buyer is Rokk3r, a Miami-based holding company that invests in creating, acquiring and integrating companies.

AdMobilize quantifies digital advertising in the physical world, so marketers can better reach their target audiences.

“If you’re walking on 5th Avenue and you pass by a bus shelter that has a digital screen, AdMobilize analyzes [peoples’] age, gender, emotion and even how long the person was looking at the ad. We created a platform that mimics the click-through rate. So we kind of created Google Analytics for the outside world,” said Rodolfo Saccoman, CEO and founder of AdMobilize.

The company, which has raised $13 million since its launch in 2012, also has offices in Saccoman’s native Brazil, as well as Colombia and London.

AdMobilize operates as a SaaS with an average monthly subscription fee of $50 per screen or billboard.

“Our tech is 95% accurate, and it’s based on undeniable computer vision data,” Saccoman said. If a digital ad screen doesn’t have a camera built-in, AdMobilize can provide one. But Saccoman made it very clear that the company doesn’t do any facial recognition and really is only interested in the data in a broader sense.

Matrix Labs, on the other hand, is a hardware company with products that look similar to Raspberry Pi, but with a lot more oomph.

“Our Matrix Labs development boards give the Raspberry Pi superpowers. It transforms the Pi to be AI-ready for computer vision, sensor fusion, voice recognition and more. It democratizes AI at the edge by removing barriers to entry, shortening the learning curve, and increases adaptability,” Saccoman said. 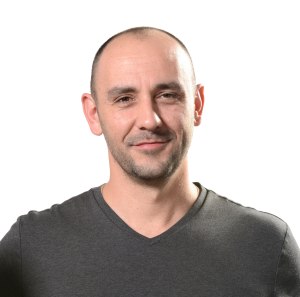 The company offers two boards. One is called the Matrix Creator and sells for $99, while the other is the Matrix Voice which goes for $75.

“It [Matrix boards] enables people to not spend millions of dollars making a piece of hardware,” Saccoman said. In fact, it levels the playing field for developers, he added. “It allows them to create solutions in the physical world with inexpensive edge AI hardware.”

Rokk3r was an early investor in AdMobilize, along with Azoic Ventures, Fuel Venture Capital, VAS Ventures and Axel Springer.

“Rokk3r has always believed in the potential of artificial intelligence, Internet of Things, and computer vision, hence it seeded and helped build AdMobilize. Where we stand today with what AdMobilize/Matrix Labs has achieved, it is clear that the technology created is critical to the future of AI/IOT/CV, and with Rokk3r’s focus on AI/IOT and IP creation, the fit was clear,” said Nabyl Charania, chairman and CEO of Rokk3r.

Saccoman is a Brazilian-born serial entrepreneur who moved to the U.S. to attend college at Cornell in 1995 and never left. He made his way down to South Florida with his first job out of college, where he was head of Digital Innovation at the ultra-lux Breakers Hotel in Palm Beach. While the AdMobilize/Matrix Labs deal is his first exit, his first “venture” was when he was just 13 years old. It was called the PiPi bag. São Paulo, the financial capital of Brazil, is notorious for awful traffic. It can often take people three hours to get to the airport, and when you’re trying to catch a flight, stopping to use the restroom isn’t usually an option. As the name suggests, the Pipi bag was a handheld portable toilet of sorts for those moments when nature calls.

The Matrix Voice is an Alexa for your Raspberry Pi

Years later, in 2007, Saccoman also founded a company with his brother who has a PhD in psychology. It was called MyTherapyJournal.com and was the first online journaling platform with cognitive behavior therapy.

“It would measure your varying emotions when you answered key questions. For example, people could start to understand what would trigger their anxiety. It had early traces of AI,” Saccoman said. MyTherapyJournal closed in 2012.

Of his various ventures, he said, “My mind was always running to find problems.”

Saccoman will stay on board and lead Rokk3r’s AI and IoT division.