Hundreds of millions of users, especially in developing markets, don’t own high-end smartphones and can’t afford fast data plans to enjoy much of anything on the web.

Google has been exploring multiple ways to better serve this segment of the user base. It has tried partnerships to make the internet more affordable to tens of millions of users. It has worked with smartphone makers to bring reliable Android experience to cheap smartphones. In fact, it’s currently working on a project with telecom operator Jio Platforms in India to further lower the price point for decent Android experience.

For mobile games, however, Google has a slightly different idea to reach users. Area 120, Google’s in-house incubator for experimental projects, last year launched GameSnacks. It’s an HTML5 gaming platform, where titles are bite-sized and they load much faster and consume far less resources because of the way they have been designed.

And that idea appears to be working.

Google said on Tuesday that over the past year it has made inroads with GameSnacks, and is now ready to scale the platform and test monetization models to make it worthwhile for game developers.

In an exclusive interview with TechCrunch, Ani Mohan, general manager of GameSnacks, said the platform has amassed over 100 titles and millions of users.

“HTML5 gaming has been growing, especially outside of the United States. HTML5 is a great way to get games to users who have just come online and probably haven’t played games online before. These games are cross-device, work on low-bandwidth connection, and are instantly playable as they don’t require users to install any files,” he said.

These single-player games, that work on any device with as low RAM as 1GB and 2G to 3G data connection, are available to users through the GameSnacks website. They can be played on desktop as well as Chrome on an iPhone or iPad (if you wanted to give it a whirl).

Now the company is using its scale to expand the reach and discoverability of GameSnacks. Mohan said in recent weeks GameSnacks games have been made available from the New Tab page in Chrome for users in India, Indonesia, Nigeria and Kenya. 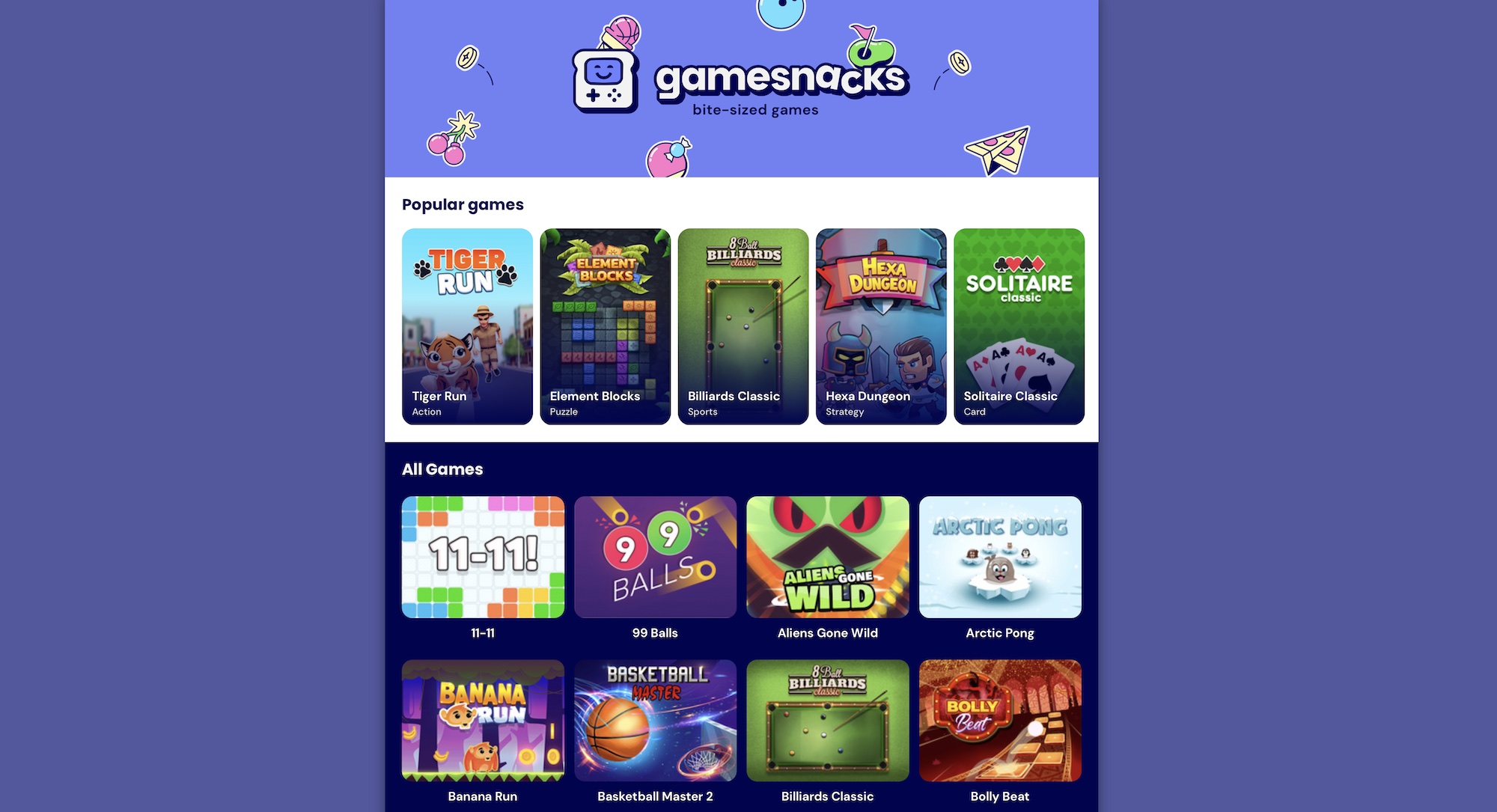 Mohan said the company is starting these integrations is select countries because that’s where many users face the challenges the platform is trying to address. “We view this as an early stage of experimentation. If it goes well, we will love to expand it,” he said.

Additionally, Mohan said the company is experimenting with bringing GameSnacks games to the Google Assistant.

“Now that few of these integrations are live, one of things we are hoping to do is talk to developers, and tell them that there is an easy way to get on Google,” he said.

Developers on GameSnacks currently monetize their games via a non-exclusive licensing model. Mohan said the team, which comprises six people (though more people from Google contribute to it), is working on helping these developers monetize their games using next-generation AdSense for Games ad formats.

“We want to help them build viable businesses over time so we’re going to start experimenting with advertising on the platform,” he said. However, this will be for a select number of GameSnacks games for now.

Emerging markets such as Africa and Asia are not new to the world of HTML games. In India, for instance, a gaming platform called Gamezop raised $4.2 million last year to expand its HTML5 games to reach more developers and embed them into over 1,000 apps.

In 2018, South African telco MTN Group launched the Bonus Bucks HTML5 game portal for its subscribers in the Southern African country. Facebook operated HTML5 Instant Games on Messenger for years until taking it off the messaging service. A quick search on our own archive returns scores of firms that work on HTML5 games in the past, though we have seen fewer examples in recent years.

Mohan remains bullish that there is a big opportunity for HTML games and this extends beyond Africa and Asia. “We don’t see these markets as our only option. These are just the markets we’re starting with because the need for HTML5 games… is especially compelling. We think the market size for this is much broader because HTML has users all around the world,” he said.