I’ve piloted Spot a number of ways in a number of different settings. I had the chance to control the robot for the first time at one of our Robotics events a number of years back, and drove one around an obstacle course at Boston Dynamics’ headquarters. More recently, I navigated it via web browser as a test of the robot’s new remote interface.

But a recent test drive was different. For one thing, it wasn’t officially sanctioned by Boston Dynamics. Of course, the highly sophisticated quadrupedal robot has been out in the world for a while, and a few enterprising souls have begun to offer a remote Spot walking experience through the streets of San Francisco.

The latest project form MSCHF isn’t that. That should come as no surprise, of course. The Brooklyn-based company is never that straightforward. It’s the same organization that gave us the “pirate radio” streaming service All The Streams.FM and that wild Amazon Echo ultrasonic jammer. More than anything, their events are comments — on privacy, on consumerism or this case, a kind of dystopian foreshadowing of what robotics might become.

Like the rest of the world, the company was fascinated when Boston Dynamics put Spot up for sale — but unlike most of us, MSCHF actually managed to cobble together $75,000 to buy one.

And then it mounted a paintball gun to its back. 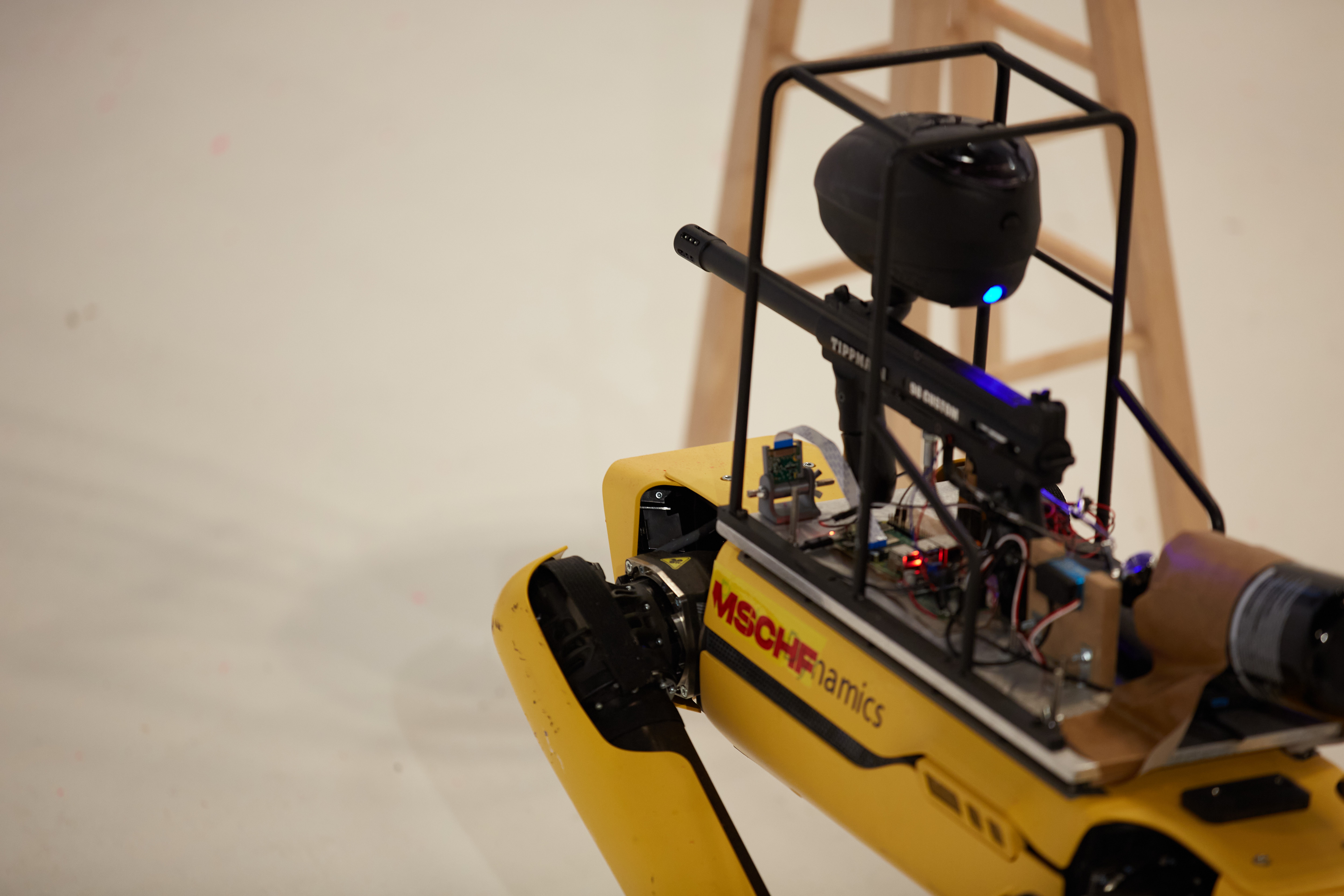 Starting Wednesday, users will be able to pilot a Spot unit through MSCHF’s site, and fire off a paintball gun in a closed setting. The company calls it “Spot’s Rampage.”

“The stream will start Wednesday at 1 PM EST,” MSCHF’s Daniel Greenberg told TechCrunch. “We will have a four-camera livestream going and as long as you’re on the site on your phone, you will have an equal chance of being able to control Spot, and every two minutes the driver will change. It should go for a few hours.”

Ahead of the launch of Spot’s web portal, the company built an API to remotely control both Spot’s SDK and the paintball gun mounted to the robot’s back. It’s a setup Boston Dynamics isn’t particularly thrilled with. Understandably so. For a company that has long been dealing with the blowback of cautionary science fiction like Black Mirror, the optics of a third-party mounting a gun — even one that shoots paint — are less than ideal.

Boston Dynamics tells TechCrunch that it was interested in working with the company early on.

“They came to us with the idea that they were going to do a creative project with Spot,” a rep told TechCrunch. “They’re a creative group of guys, who have done a bunch of creative things. In our conversations, we said that if you want to cooperate with us, we want to make it clear that the robots will not be used in any way that hurts people.”

Boston Dynamics balked when paintball gun entered the conversation. On Friday, it issued the following statement through Twitter:

Today we learned that an art group is planning a spectacle to draw attention to a provocative use of our industrial robot, Spot. To be clear, we condemn the portrayal of our technology in any way that promotes violence, harm, or intimidation. Our mission is to create and deliver surprisingly capable robots that inspire, delight & positively impact society. We take great care to make sure our customers intend to use our robots for legal uses. We cross-check every purchase request against the U.S. Government’s denied persons and entities lists, prior to authorizing a sale.

In addition, all buyers must agree to our Terms and Conditions of Sale, which state that our products must be used in compliance with the law, and cannot be used to harm or intimidate people or animals. Any violation of our Terms of Sale will automatically void the product’s warranty and prevent the robot from being updated, serviced, repaired or replaced. Provocative art can help push useful dialogue about the role of technology in our daily lives. This art, however, fundamentally misrepresents Spot and how it is being used to benefit our daily lives.

The statement is in line with the language in Spot’s contract, which prohibits using the robot to do anything illegal, or to intimidate or harm people. The company says it does additional “due diligence” with potential customers, including background checks. 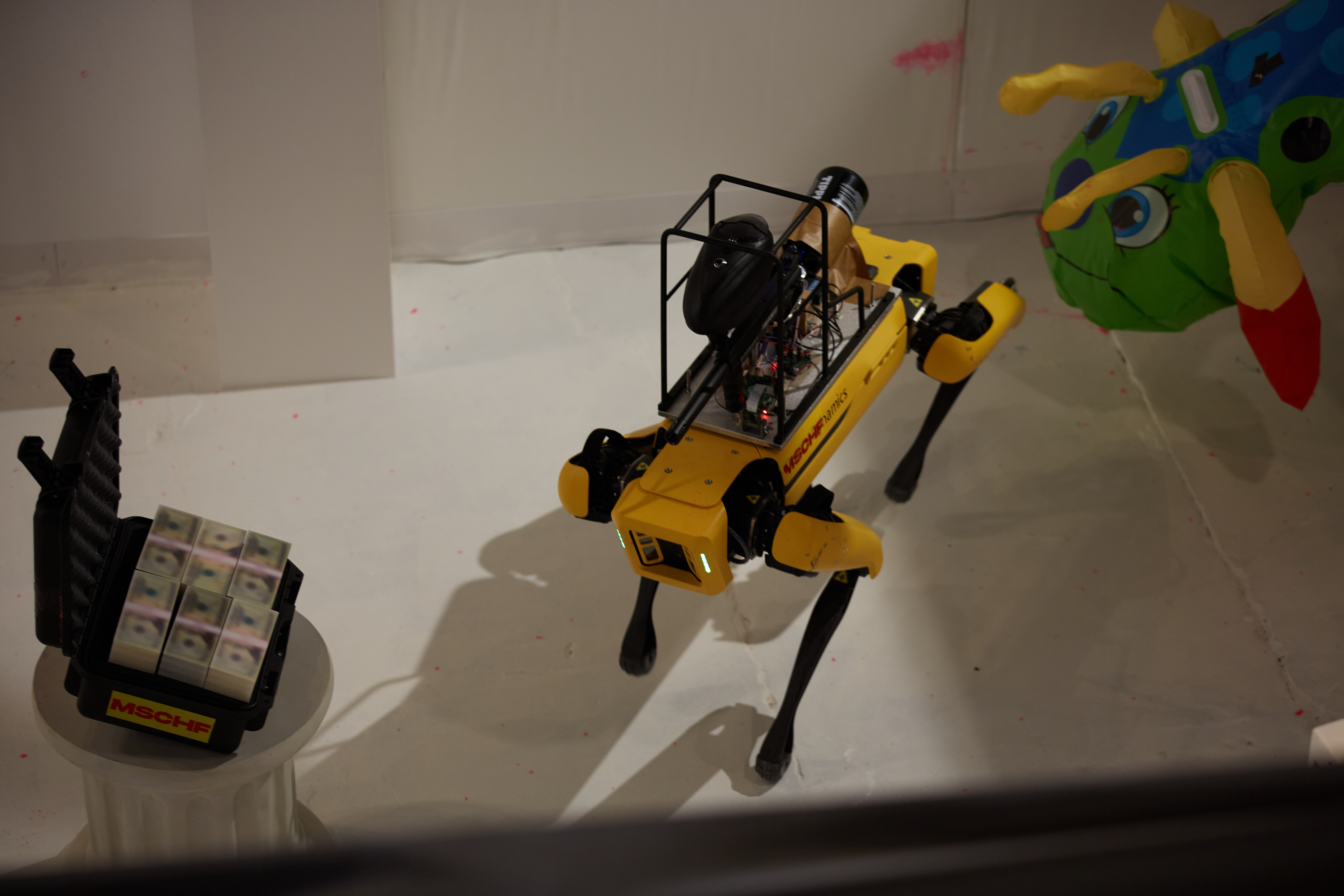 The application is something of a gray area where Boston Dynamics is concerned. MSCHF approached the robotics company with its idea and Boston Dynamics balked, believing it wasn’t in-line with the stated mission for the quadrupedal robots. The official Spot’s Rampage site notes:

We talked with Boston Dynamics and they HATED [emphasis theirs] this idea. They said they would give us another TWO Spots for FREE if we took the gun off. That just made us want to do this even more and if our Spot stops working just know they have a backdoor override built into each and every one of these little robots.

Boston Dynamics says the company’s “understanding of the interaction” is “inaccurate.”

Boston Dynamics says it pitched the idea of using Spot’s robot arm to paint the physical space with a brush, rather than using the paintball gun. The company also offered to send technicians to the site to help maintain the robot during the stream, along with a few models as back up.

MSCHF’s inclusion of the paintball gun is, ultimately, about more than simply painting the canvas. The image of the robot with a gun — even one that only shoots paint — is menacing. And that’s kind of the point.

“It’s easy to look at these robots dance and cavort and see them as cute semi-sentient little friends,” says Greenberg. “They’re endearing when they mess up and fall over. We’ve adopted the trappings of that scenario by creating a ‘bull-in-a-china-shop’ scenario. Still, it’s worth remembering the big versions of Spot [Big Dog] were explicitly military mules, and that their public deployments tend to be by city agencies and law enforcement. At the end of the day, Spot is a terrestrial UAV – when you get to drive this robot and experience the thrill of pulling the trigger your adrenaline spikes — but, we hope, a few minutes later you feel a distinct chill. Anyone in their right mind knows these little cuties will kill people sooner or later.”

While early Boston Dynamics robots were, indeed, funded by DARPA for use as transport vehicles, the company is quick to distance itself from even the remotest hint of ominous imagery. Boston Dynamics came under fire from the ACLU after showcasing footage of a Spot being used in Massachusetts State police drills onstage at a TechCrunch robotics event.

The company told TechCrunch at the time:

Right now we’re at a scale where we can pick and choose the partners we engage with and make sure that they have a similar deployment and a vision for how robots are used. For example, not using robots in a way that would physically harm or intimidate people. But also have a realistic expectation for what a robot can and cannot do.

As MSCHF prepares to launch its event, the company is echoing those sentiments.

“I turned down a customer that wanted to use Spot for a haunted house,” Boston Dynamics tells TechCrunch. “Even putting it in that context of using our technology to scare people was not within our terms of use and not how we imagined the product being beneficial for people, and so we declined that initial sale. Had this concept been brought to us while we were in the initial sales discussions, we probably would have said, ‘there’s Arduino quadruped that you could easily put this activation together. Go do that. This isn’t representative of how we view our technology being used.’ ” 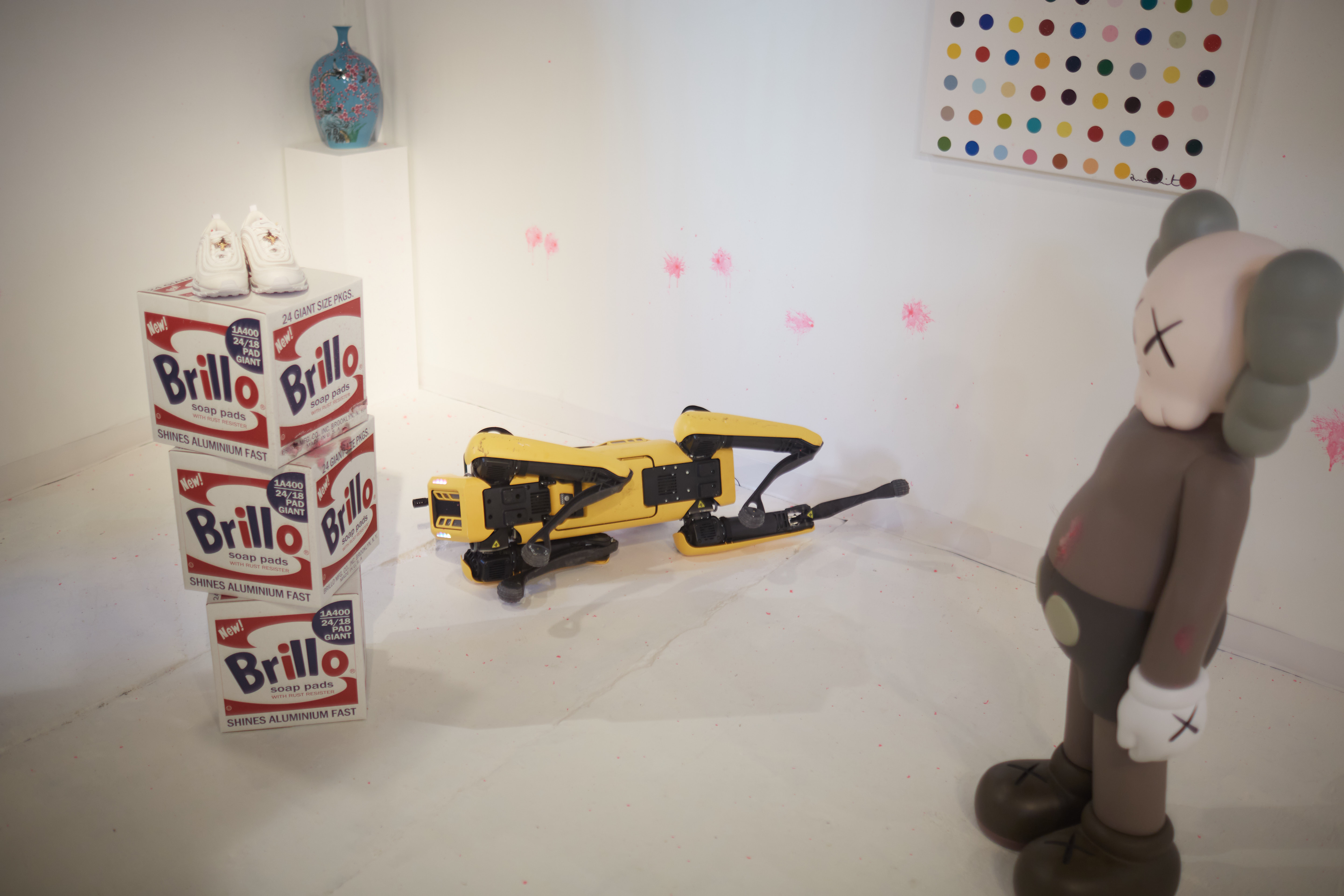 But the question of whether the company can put the toothpaste back in the tube remains. In cases of violations of the Terms of Service, the company can opt not to renew the license, which effectively deactivates it the next time a firmware update is due. Other cases could essentially void the warranty, meaning the company won’t service it.

A paintball gun being fired in a closed space likely doesn’t fall under harm, intimidation or illegal activity, however. So it’s not entirely clear whether Boston Dynamics has a direct course of action in this case.

“This is something we’re evaluating now, around this particular use case,” Boston Dynamics says. “We do have other terms of service in there, regarding modification of the robot in a way that makes it unsafe. We’re trying to understand what the implications are.”

Boston Dynamics (whose sale to Hyundai is expected to close in June) has devoted a good deal of time to showcasing the various tasks the robot can perform, from routine inspections at hazard sites to the complex dance moves it’s performed in a recent viral video. MSCHF’s primary — and, really, only — use is an interactive art piece.

“To be honest, we don’t have any further plans [for the robot],” says Greenberg. “I know we won’t do another drop with it as we do not do repeats so we will just have to get really creative. Maybe a waking cup holder.”