Zhou Yuxiang doesn’t have the typical profile for working in China’s manufacturing world. A soft-spoken yet incisive person in his early thirties, Zhou graduated from Dartmouth College with a degree in government and went on to work in investment banking in Hong Kong, following the path of many Chinese overseas returnees.

But a few years into his career, Zhou realized he wanted to build his own business. This was around 2015, a time when China was consumed by a startup craze amid Premier Li Keqiang’s campaign for “mass entrepreneurship and innovation.” Rather than going into the sleek world of consumer lifestyle, fintech or AI, Zhou picked manufacturing as a starting point.

During his time at Barclays, Zhou helped deep-pocketed Chinese manufacturers scour for merger and acquisition deals in Europe. He saw how factories in Germany digitize their operations using Siemens and SAP solutions. In China, “factories had a lot of money and could buy top-of-the-line equipment. But on the software management front, they were still very primitive,” said Zhou in an interview with TechCrunch.

“Most of the operation was done on paper. Every day, workers received a stack of papers telling them what to do, and in turn, they filled up the sheets reporting what material they had used … When you acquire these financially underperforming factories in Europe, you realize their software infrastructure capabilities are still far superior to yours,” Zhou added.

That digital gap encouraged Zhou to start Black Lake, a software platform for factory workers to log their daily tasks and managers to oversee the plant floor. Since its inception in 2016, the startup has raised over $100 million from GGV Capital, Bertelsmann Asia Investments, GSR Ventures, ZhenFund and others. The company recently closed a Series C round, pocketing nearly 500 million yuan ($77 million) and bringing on new backers including Singapore’s sovereign wealth fund Temasek, who led the round, as well as China Renaissance and Lightspeed Venture Partners.

Black Lake’s vision is to be a one-stop collaboration platform for factory workers and managers, digitizing data incurred in all stages of production, from client orders, material procurement, quality compliance, warehouse management, to logistics and shipment. The software analyzes these reams of data, churning out reports for bosses to check for abnormalities in production and for workers to see how they could increase their output and income.

Compared to SaaS incumbents from the West, Black Lake’s more localized services and affordable prices have a greater appeal to China’s wide swathes of small and medium-sized factories, Zhou argued. Black Lake tries to simplify its user experience to a Lego-like building process so factory bosses can easily customize the software for their own use. Workers access the cloud-based software from their smartphones, which have become ubiquitous in China’s affluent cities thanks to increasingly friendly device prices and data fees. A foreign SaaS giant’s solution could cost a factory at least three million yuan a year, while Black Lake charges 300,000 yuan or less, Zhou said.

To date, the company has served nearly 2,000 manufacturers and suppliers across the Greater China Region and Southeast Asia, counting in its customers Tesla, L’Oréal, Xiaomi, Sinopec, and Chinese state-owned conglomerate China Resources’ pharmaceutical group. In all, the company claims to have reached 500,000 production workers. 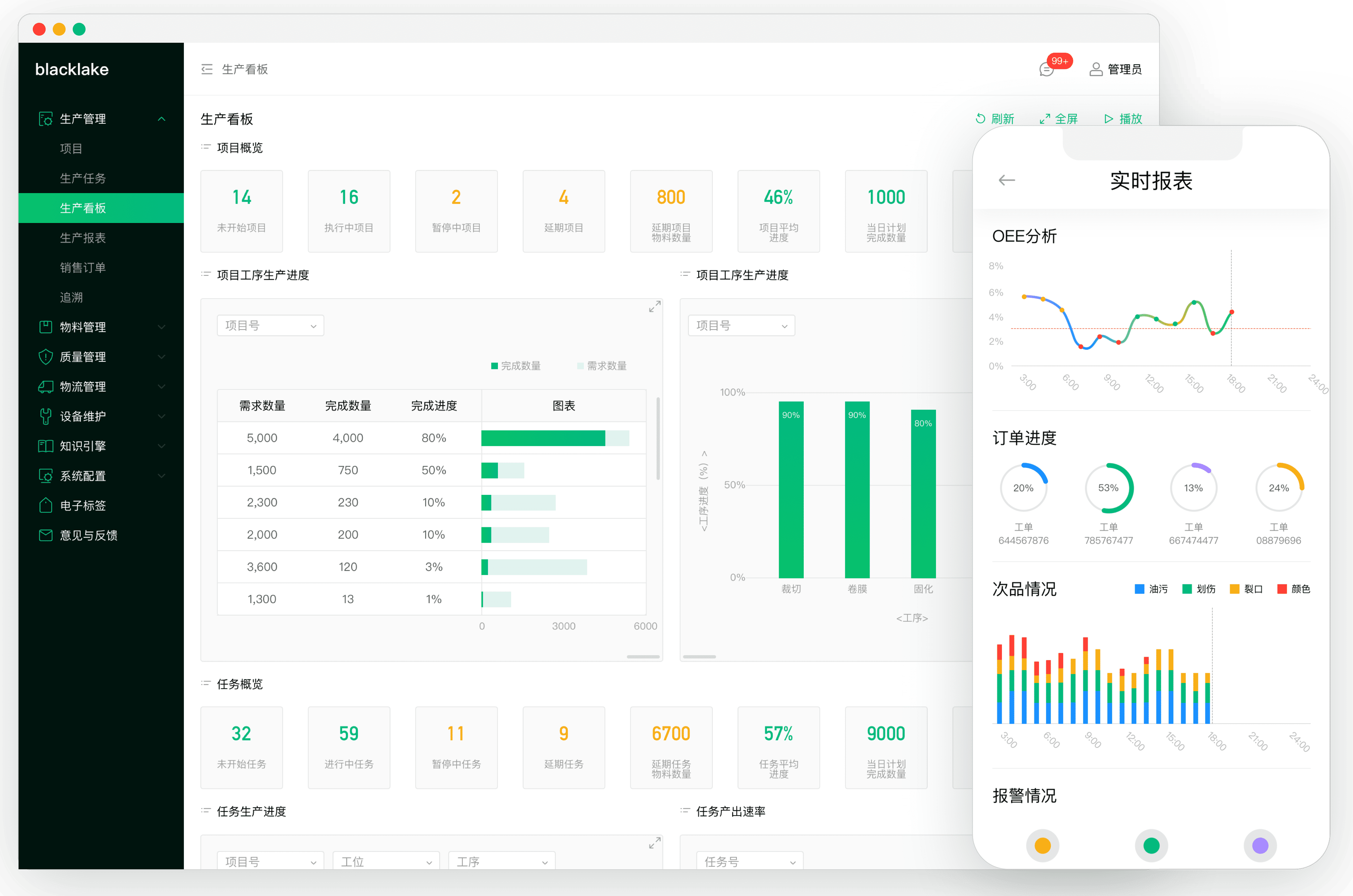 Black Lake is riding a perfect wave of “upgrading” in China’s manufacturing world. For one, the demand for customized products is rising as consumers become savvier. Instead of producing bottled water with the same packaging, for instance, beverage companies now design various looks tailored to different demographics. Factories need to adjust quickly to the flood of customized orders, and a cloud-based data management platform could be the solution, Zhou suggested.

The U.S.-China trade war is another impetus for China’s push for factory upgrades. Having felt the heat from trade sanctions, Chinese manufacturers look to cut expenses and improve productivity. That shift, along with the government’s “new infrastructure” policy to breathe high tech into traditional industries, makes Zhou all the more bullish about his business.

But Black Lake is certainly not the only one to have spotted opportunities in China’s efforts to modernize production, and enterprise software in China has a notoriously slow monetization cycle in part due to low adoption and companies’ reluctance to pay for services. The key is finding a viable business model to fund its dream to be the ultimate “data entry point” for China’s millions of factories.

With proceeds from its new funding, Black Lake plans to spend on product development, hiring, market expansion and building an open platform for third-party developers. The startup realizes it can’t build everything factories need, and it’s already working with partners across telecommunications, cloud computing, automation and consulting, such as Huawei, Alibaba, SAP and McKinsey.

“When Chinese factories ‘wake up,’ their speed of digitization will definitely leapfrog that of their American and European counterparts,” Zhou asserted.