Social audio app Clubhouse has now topped 8 million global downloads, despite still being in a prelaunch, invite-only mode, according to new data released today by mobile data and analytics firm App Annie. Per its estimates, Clubhouse grew from over 3.5 million global downloads as of February 1, 2021, to reach 8.1 million by February 16, 2021. This sharp growth is attributed to several high-profile guest appearances, including those from Tesla and SpaceX founder Elon Musk and Facebook CEO Mark Zuckerberg, for example.

App Annie also estimates that 2.6 million-plus of the total global installs took place in the U.S. — a figure that highlights the app’s global appeal. 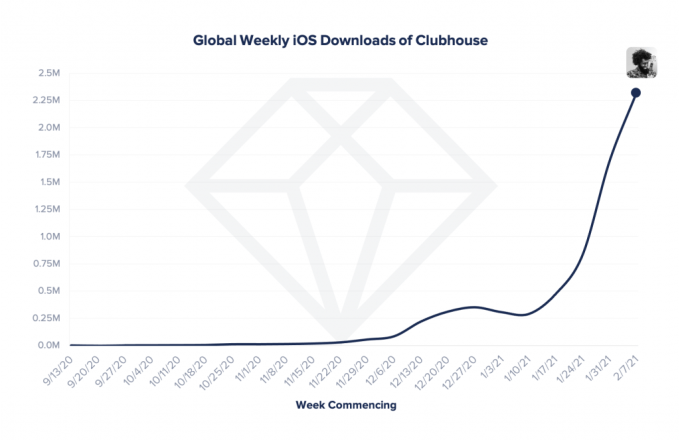 Clubhouse, meanwhile, hasn’t officially shared its total number of downloads or registered users, but CEO Paul Davison revealed in January the app had grown to 2 million weekly active users — which means the app’s monthly active user figure and total registered user count would be much higher. Other estimates have put the app’s registered user base in between 6 million and 10 million (the latter citing unnamed sources.)

It’s worth noting that app install figures aren’t typically a valid proxy for registered users as many people often download an app but then never open it or sign up. But in Clubhouse’s case, the two figures could be more closely aligned as people who are installing the app are motivated to join. The app is not open to the public, so the users installing the app are likely either in possession of a Clubhouse invite or are aiming to get one from a friend or trusted contact who’s already joined.

Also in the new report, App Annie noted how the Clubhouse phenomenon is having an impact on the larger app ecosystem. Local rivals to Clubhouse offering their own social audio experience have also gained downloads in recent days, including Dizhua, Tiya and Yalla, which have attracted users in China, the U.S., Egypt, Saudi Arabia and Turkey.

Dizhua, for example, has 174,000 downloads; Tiya has 6 million; and Yalla has 34.5 million, the report says. Yalla, notably, has been live since 2016, but Clubhouse’s popularity is giving it a boost.

Beyond this small handful, there’s been an explosion of social audio experiences, including those from startups like Sonar, Locker Room, Quilt, Yoni Circle, Roadtrip, Space, Capiche.fm, Yac, Cappuccino and others. Twitter, meanwhile, is building its own Clubhouse rival with Spaces, which it said yesterday will expand to Android by March. Facebook, too, is reportedly planning a Clubhouse competitor.

The question on everyone’s minds now is how much of this growth is sustainable. Skeptics say Clubhouse lends itself to those who tend to dominate conversations by talking at length; that many of its conversations are just kind of boring; that the app favors the “hustle culture”-obsessed; and so on. Some also wonder how well social audio apps will fare when the world reopens post-COVID and there’s more to do — including the return to traditional networking events.

But these concerns don’t take into account that social audio has the potential to carve out space for itself by supplanting users’ other mobile spoken-word audio activities, like podcast listening or audiobooks. Of course, questions about Clubhouse’s future can’t really be answered now, as the pandemic continues, and with an app that’s not fully open to the public.