Last month, Facebook-owned WhatsApp announced it would delay enforcement of its new privacy terms, following a backlash from confused users which later led to a legal challenge in India and various regulatory investigations. WhatsApp users had misinterpreted the privacy updates as an indication that the app would begin sharing more data — including their private messages — with Facebook. Today, the company is sharing the next steps it’s taking to try to rectify the issue and clarify that’s not the case.

The mishandling of the privacy update on WhatsApp’s part led to widespread confusion and misinformation. In reality, WhatsApp had been sharing some information about its users with Facebook since 2016, following its acquisition by Facebook.

But the backlash is a solid indication of much user trust Facebook has since squandered. People immediately suspected the worst, and millions fled to alternative messaging apps, like Signal and Telegram, as a result.

WhatsApp faces legal challenge over privacy in its biggest market

Following the outcry, WhatsApp attempted to explain that the privacy update was actually focused on optional business features on the app, which allow a business to see the content of messages between it and the end user, and give the businesses permission to use that information for its own marketing purposes, including advertising on Facebook. WhatsApp also said it labels conversations with businesses that are using hosting services from Facebook to manage their chats with customers, so users were aware.

In the weeks since the debacle, WhatsApp says it spent time gathering user feedback and listening to concerns from people in various countries. The company found that users wanted assurance that WhatsApp was not reading their private messages or listening to their conversations, and that their communications were end-to-end encrypted. Users also said they wanted to know that WhatsApp wasn’t keeping logs of who they were messaging or sharing contact lists with Facebook.

These latter concerns seem valid, given that Facebook recently made its messaging systems across Facebook, Messenger and Instagram interoperable. One has to wonder when similar integrations will make their way to WhatsApp.

Today, WhatsApp says it will roll out new communications to users about the privacy update, which follows the Status update it offered back in January aimed at clarifying points of confusion (see below).

In a few weeks, WhatsApp will begin to roll out a small, in-app banner that will ask users to re-review the privacy policies — a change the company said users have shown to prefer over the pop-up, full-screen alert it displayed before.

When users click on “to review,” they’ll be shown a deeper summary of the changes, including added details about how WhatsApp works with Facebook. The changes stress that WhatsApp’s updates don’t impact the privacy of users’ conversations, and reiterate the information about the optional business features.

Eventually, WhatsApp will begin to remind users to review and accept its updates to keep using WhatsApp. According to its prior announcement, it won’t be enforcing the new policy until May 15. 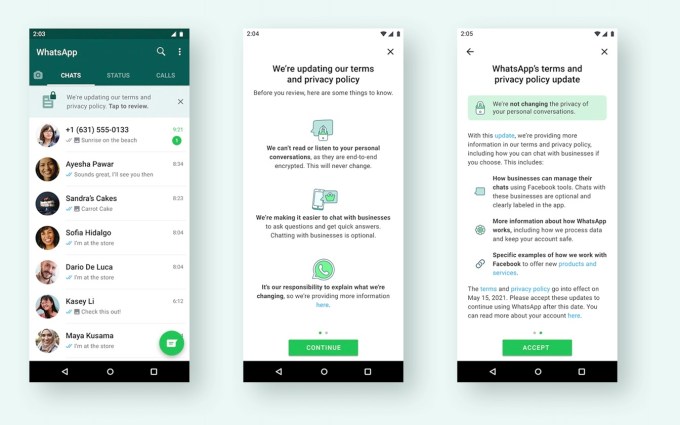 Users will still need to be aware that their communications with businesses are not as secure as their private messages. This impacts a growing number of WhatsApp users, 175 million of whom now communicate with businesses on the app, WhatsApp said in October.

In today’s blog post about the changes, WhatsApp also took a big swipe at rival messaging apps that used the confusion over the privacy update to draw in WhatsApp’s fleeing users by touting their own app’s privacy.

“We’ve seen some of our competitors try to get away with claiming they can’t see people’s messages – if an app doesn’t offer end-to-end encryption by default that means they can read your messages,” WhatsApp’s blog post read.

This seems to be a comment directed specifically toward Telegram, which often touts its “heavily encrypted” messaging app as a more private alternative. But Telegram doesn’t offer end-to-end encryption by default, as apps like WhatsApp and Signal do. It uses “transport layer” encryption that protects the connection from the user to the server, a Wired article citing cybersecurity professionals explained in January. When users want an end-to-end encrypted experience for their one-on-one chats, they can enable the “secret chats” feature instead. (And this feature isn’t even available for group chats.)

In addition, WhatsApp fought back against the characterization that it’s somehow less safe because it has some limited data on users.

“Other apps say they’re better because they know even less information than WhatsApp. We believe people are looking for apps to be both reliable and safe, even if that requires WhatsApp having some limited data,” the post read. “We strive to be thoughtful on the decisions we make and we’ll continue to develop new ways of meeting these responsibilities with less information, not more,” it noted.