Since M-Pesa’s mobile money infrastructure came into play in 2007, there has been a proliferation of fintech services ranging from wallets to savings and loans. With this mobile money ecosystem growing in double-digits year-on-year, a lot of data is being created in the process. But this has left some fragmentation, where one person’s information is diverse and can be accessed via multiple channels.

For banks and financial institutions, it becomes difficult to understand and provide insights from users’ data. Over the past three years, some platforms have looked to solve this problem. They aggregate users’ financial data and share it with these financial players through APIs driving more data-driven insights and value-added products. One such platform is Pngme.

Today, the Africa-focused but U.S.-based unified financial data platform announced its seed round of $3 million. The investment, led by Radical Ventures, Raptor Group, Lateral Capital and EchoVC was closed in Q3 2020 and came after the fintech startup raised $500,000 in pre-seed two years ago. It further reflects the continued customer growth from banks, fintechs, credit bureaus and microfinance banks in Ghana, Kenya and Nigeria.

Founded by Brendan Playford and Cate Rung, Pngme started primarily as a lending platform in 2018. Playford, who grew up in the U.K., came to East Africa in 2007 to work on philanthropic biofield projects. He ended up writing short-term loans to entrepreneurs, particularly in Kenya and Tanzania, and during this time formed the basis for which he as CEO and Rung as COO founded Pngme.

“That was sort of the impetus we needed and also the experience of being credit invisible in the U.K. led Cate and me to found the company specifically focusing on providing access to finance to Africans,” he said to TechCrunch.

According to Rung, the company’s initial thesis was that entrepreneurs didn’t get enough help, capital-wise. But going into 2019, when the company raised its pre-seed round, the founders realized another problem — the lack of data infrastructure to access risk when giving out loans or capital.

Their stint in an accelerator based in Toronto, Canada helped to better understand the more valuable version of the company — the B2C layer which connects entrepreneurs with finance or the data infrastructure layer to understand risk or a person’s financial identity.

“We were building two different companies at once, so we had to choose one path. We realised that the data infrastructure layer was critical and a massive pain point in most of sub-Saharan Africa,” the COO added.

Pngme had to make a swift pivot to the latter. Building this would have a much more significant impact. Being able to aggregate mobile money transactions, bank transactions, loan data, behavioural data, process all that data into a structured format and make it available as an open API to developers, fintechs or banks across the continent will provide data to power real-time credit and new financial products.

Additionally, the company found out in the course of building that consumers want to understand their finances more. This helps to navigate their way to financial wellness using credit and, later, more sophisticated products. On the other hand, financial institutions need the data to know what customer segments to expand to or increase their bottom line. Therefore, placing emphasis on the customers’ needs is one of the company’s core value propositions.

“We’re hyper-focused on providing the highest real-time data coverage on credit-invisible customers, something that no other API is offering in our markets,” said Playford regarding the company’s consumer-centric play. 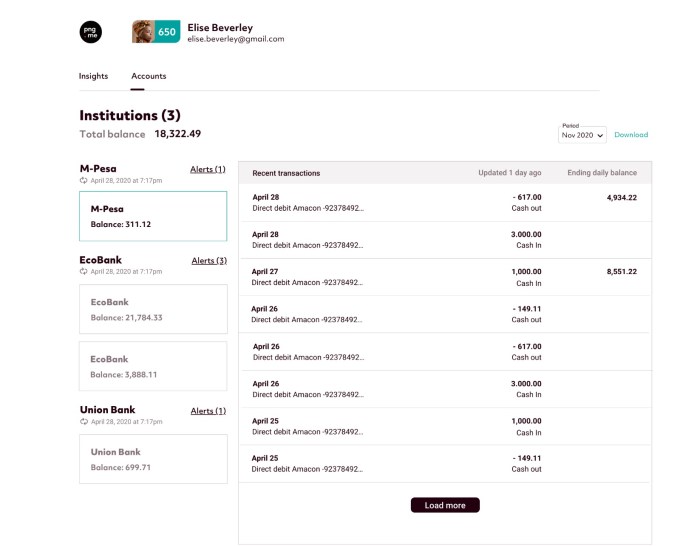 Some of Pngme’s customers include SimpleFi, Pavelon, ReadyCash, CashTopUp and Rigo Microfinance. In addition to this, the CEO says the company will integrate with large institutional banks next month.

Despite similarities to other API fintech startups in the region with Plaid-esque functionalities, Playford says Pngme intends to be different from the billion-dollar company.

For one, its focus on traditional channels like USSD data — which has the highest financial coverage on the continent — attests to that. “We’ve gone a step beyond just providing rails to actually building on top of the data. We also provide machine learning insights for our customers,” Rung said.

Also, the platform’s SDK collects user-permissioned data through a partner’s existing app using a one-click data-sharing feature. This data is served up through an easy to integrate API that delivers real-time financial data and alerts. With 300% month-on-month growth in the fourth quarter of 2020, Pngme forecasts the number of user-permissioned data profiles created on its platform to reach hundreds of thousands and millions by 2022.

Pngme’s revenue model is subscription and API-call driven. The platform has different tiers; developers can get a set number of free API calls with no subscription with the free tier. With the enterprise tier for banks and fintech, API calls are charged and can be discounted in some instances. Besides that, the company has a white-glove onboarding process where Playford says developers and startups can reach out to build specific use cases on the platform.

Since raising its pre-seed round, Pngme has been in stealth mode, working with a close group of customers. But with this seed round, the company is going full tilt. According to Pngme, the investment is being used to grow its Lagos and Nairobi teams, particularly the engineers and data scientists, and scaling its product for banks, mobile money operators and fintechs.

Lateral Capital, one of the investors in this round, also backs another API fintech startup in Mono. On the firm’s decision to invest in Pngme, managing partner, Rob Eloff said to TechCrunch that “over the past five years, we have seen a growing appreciation for the continent-wide challenge of providing accurate relational data for financial services customers across Africa. In Pngme, we are fortunate to have met a team with a unique solution to the root cause of financial exclusion in Africa, and a unique culture that spans the best of Africa and the U.S.”

For EchoVC Partners, an early-stage VC with offices in Lagos, London, and Nairobi, it’s the remarkable job the Pngme team has done in building and delivering a unified financial data API platform for credit identity and access. This is according to Damilola Thompson, the VP and associate general counsel at the firm.

At the moment, Pngme is processing millions in data points per month. With that scale, Rung hopes it will lead to the creation of new technology and more sophisticated financial products.

“What I think is most exciting is the way mobile money leapfrogged any sort of traditional financial infrastructure. Similar to that is how we’re seeing open banking in the U.S. give way to so many new financial products for the end consumer. I hope that by providing forward-thinking open API layers, the same can happen in Africa.”