Freelancers who work well together in teams are the target for Collective, a French startup that’s launching a software-as-a-service marketplace today. (Not to be confused with Collective, a US-based startup that offers back-office tools for the self employed running a business-of-one.)

Collective (the French ‘teams’ edition) is co-founded by Jean de Rauglaudre and Vianney de Drouas, and is backed by the SaaS-focused startup studio/venture builder, eFounders, which covers expenses during the first 18 months (so how much it ends up investing depends but typically runs to at least a few thousand euros.)

“As a former freelancer, I was really attracted by this new way of working,” says de Rauglaudre, discussing why Collective is focusing on “independents teaming up by mutualizing skills, networks and work methodology in a quest to go faster, think bigger, and find more meaning”, as he puts it.

The startup points to notable Collectives that have emerged in recent years — such as ProductLed.Org and Knackcollective.com in the US, and Mozza.io, Alasta.io and Lookoom.co in France, as feeding the idea.

It argues that the indie ‘collectives’ phenomenon has only been accelerated as a result of the coronavirus pandemic — with companies faced with more uncertainty looking for more resilient and flexible options.

The pair of founders worked with eFounders to hone their fledgling idea. “We understood that collective was the ultimate next step on this market. Though, we noticed that those forms today do not scale (because of so many admin issues), do not shine (because they do not thrive under a standardized reality), and work alone (while solo freelancers have a lot of tools and benefit from a legal existence, collectives are still undeserved). Therefore, we ‘imaginated’ Collective!” de Rauglaudre tells TechCrunch. 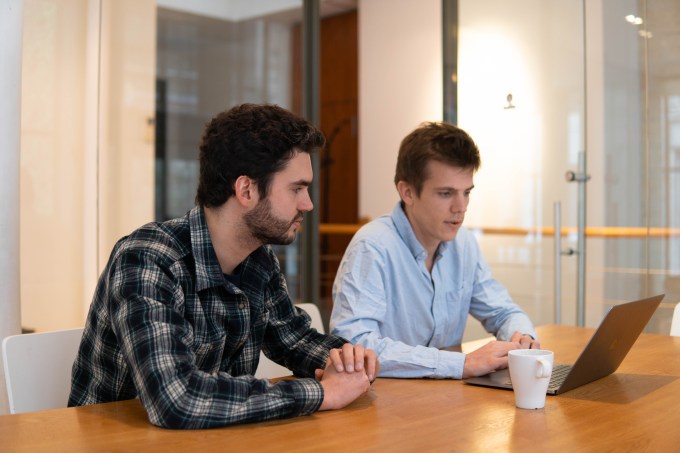 For teams of skilled indie workers the lure of Collective is a promise that it combines the benefits of working in an agency — because its SaaS platform automates a bunch of back-office functions like proposals, invoices, contracts and payments — with the flexibility of still being freelance and thus able to pick and choose projects and clients.

“Exhaustive” back-office is the promise from de Rauglaudre. (Which — yes — does include chasing clients for late/non payment of invoices. When we checked that detail he dubbed the service “a perfect combination of flexibility (inherent to collective models) and security (related to our back-office)”. Late freelancer payments are of course an infamous pain-point that’s been targeted by other startups over the years; but Collective is coming with the full back-office package.)

It’s been soft launched for one month at this point and in that time says 18 collectives have been formed on its marketplace, comprising more than 150 freelancers in total.

Early collectives operating on its marketplace are offering “varied” expertise — from software development, design, product management, and growth — and are already working with five companies. Collective also says it’s speaking with more than 80 companies as it starts its push for scale.

“We did not expect such huge interest in so little time, coming both from independents and companies,” adds de Rauglaudre in a statement. “This confirms our initial realization: That people and companies are looking for more flexible ways of working and that it is by joining forces that we can reach higher. What we’re seeing is the very beginning of the teamwork revolution.”

“While solo freelancers benefit from a legal existence and have dedicated platforms, collectives are still under-served,” says eFounders co-founder Thibaud Elziere in another supporting statement. “They all operate under different legal structures and struggle to find work because they don’t have the right tools. Collective aims to become the go-to solution to help collectives exist, find work and scale.”

In terms of the underlying trends Collective is aiming to tap into, de Rauglaudre points to “skyrocketing” rates of independent work over the past decade (150%+).

The Freelancer Generation: Why Startups And Enterprises Need To Pay Attention

As they investigated further, he says they noticed that more and more freelancers are working together in various forms — suggesting that around a fifth of independents “work as a collective consciously or not”.

“We estimate that +10M freelancers are merging in collectives worldwide but with very various forms (structured or not). They want to team up to increase their revenues (competing against agencies and not solo freelancers) while improving their working mode (not alone any more),” he suggests.

In terms of target sectors/skills for the marketplace to serve (and serve up), he doesn’t think there’s a single template — but Collective is starting by focusing development (on the ‘collectives’ supply side) on design, product, tech, data and growth marketing; and (on the client demand side) on large scale-ups and tech companies.

The business model at this stage is for it to a charge markup (5%-15%) on the client side. The lower fee is charged is the platform isn’t providing the client; while the higher figure is if it is, per de Rauglaudre.

Once all the bells and whistles are ready with the SaaS — in about another month — he says it will also charge a monthly fee on the collective side.

Given the branding clash with the SF-based back-office startup Collective, the French team may want to take that time to consider a name change — maybe ‘Collectif’ could work? 🙃

Collective, a back-office platform that caters to ‘businesses of one,’ just landed a hefty seed round