Ethena co-founders Roxanne Petraeus and Anne Solmssen began their company with a clear goal: There needs to be a more modern, and effective, way to deploy anti-harassment training to employees. Ethena’s solution is to send employees bite-sized monthly “nudges” or pings with five-minute lessons, replacing the usual one-hour annual workshop with more flexible learning.

The startup raised $2 million off of that vision in June, and today has announced it has raised follow-on funding with the same exact amount, led by GSV. The startup currently has $5 million in venture capital, with investors including Homebrew, Neo and Village Global.

The follow-on capital comes right after Ethena has had some solid growth itself. The startup closed a couple major contracts with companies including Netflix, Zoom and Zendesk, and tells TechCrunch that more than 20,000 active employees complete its monthly training.

Solid growth and new cash is where the story could stop for now, but Petraeus tells TechCrunch that early momentum has also inspired a shift of sorts in what Ethena is trying to accomplish.

“When we initially launched in Feb 2020, we thought that for our first year, we’d focus entirely on scaling companies because only startups would be interested in an innovative approach to compliance training,” she said. “What’s changed is we’ve learned that even large enterprises want a better approach, deeper impact and are willing to be innovative in a space historically dominated by lawyers and legacy e-learning providers.”

The startup is expanding its offering from anti-sexual harassment training to a wide variety of training courses focused on compliance, from financial compliance to code of conduct measures. The shift wasn’t because of a lack of interest from customers, the co-founder said, but instead demand from existing enterprise customers to offer more than just a singular topic.

“We think taking a specific sector-based approach can actually narrow the impact we’re having,” Petraeus said. “So we are trying to take a really inclusive approach,” from the start on what kind of topics should be treated as more than “just checking off a box.”

Petraeus, an army veteran, says that Ethena’s confidence in effectiveness and outcomes comes from military data on how adults learn.

“We know that traditional training just isn’t effective at behavior change, and there are some studies that show that it’s a pretty big backlash with increased unconscious bias after training versus before.” The startup differentiates from other micro-learning plays in its curriculum.

The curriculum is designed to be consumed over the course of a year instead of in an annual hour-long session. This tiny iteration is enough to give employees a repetitive way to understand the content. “We’re experimenting with things like graphic novels and podcasts to present training,” Petraeus said. “Just making sure whatever we’re doing yesterday is important tomorrow, because I think it’s important for us to be agile content creators.” 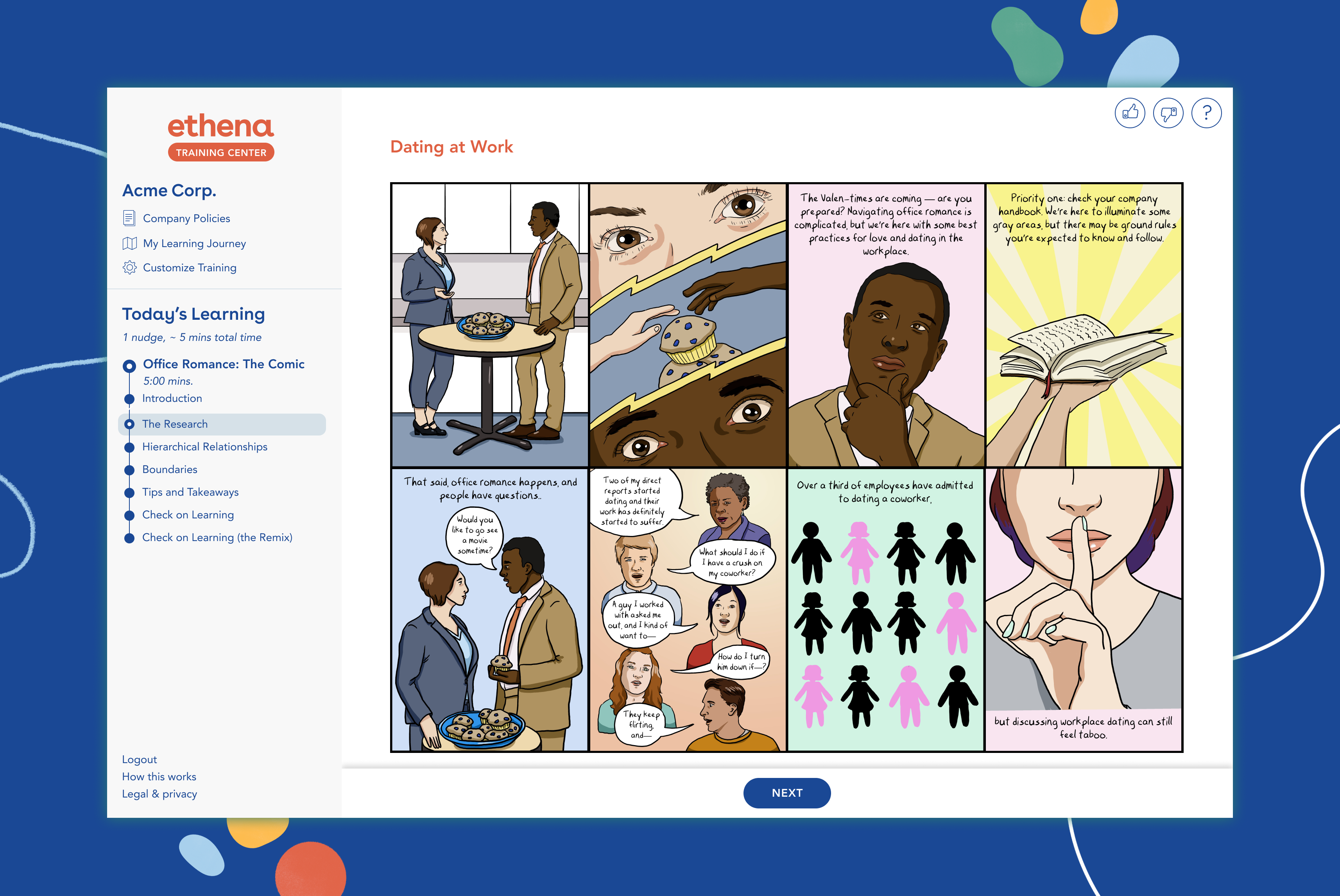 The micro-learning approach has long been popular among edtech companies as a way to sneak or gamify small lessons into a workflow. So far, Ethena says over 90% of 150,000 in-app learner feedback notes are positive, saying the information is engaging and relevant. In Q4, Ethena saw learner growth of more than 250% quarter over quarter.

GSV’s Deborah Quazzo, who led Ethena’s seed and now this follow-on financing, said that it’s “not a coincidence that they’ve picked up some of the best logos in the world at an early stage,” referring to Ethena’s big customers. Quazzo thinks the compliance market has had very limited innovation so far, even though it’s a massive opportunity.

“They are seeing such strong product market fit and customers are pulling them into areas of content extension, so having more room to run faster made total sense,” she said.