Income-share agreements, or ISAs, have been gathering force as an alternative financial model for students, particularly at non-traditional schools like coding boot camps and trade schools. We’ve done some pretty deep dives into the space over the years in terms of how these loan products incentivize students and colleges to work together for better professional outcomes. Given their novelty though, one of the largest barriers to wide adoption remains the lack of capital for these models.

How income share agreements will spark the rise of career accelerators

That’s starting to change, and companies like Blair are leading the charge.

Blair told TechCrunch that it has raised $100 million in a new debt facility to fund what it is dubbing “Blair Capital” to fund ISAs at partner institutions. The money came from an undisclosed investor, which was described by Blair CEO Mike Mahlkow as an “institutional capital partner with more than $10 billion under management.”

My colleague Mike Butcher first profiled Blair when it was coming out of YC back in summer 2019. When Blair first got started by co-founders Mahlkow, Constantin Schreiber and David Nordhausen, it was focused exclusively on the direct-to-consumer market for ISAs. The idea was that students would go to Blair and secure an ISA with a set amount of upfront cash to cover tuition and cost of living, and then choose a school to attend. Underwriting was based on the future income potential of the student.

Launching out of YC, Blair is aiming to reshape the financing of college tuition

Blair’s technology platform allowed it to service ISAs for students, such as collecting their payments, tracking their requirements and giving them updates on their remaining terms. But to really scale up the platform, Blair needed capital to actually underwrite ISAs and increase loan volumes on its platform.

So it looked to raise a debt facility — and then COVID-19 hit. “It was very, very, difficult to raise any kind of debt capital for direct-to-consumer ISAs,” Mahlkow explained in the milieu of a pandemic. But, “we got a lot of inbound demand from education institutions,” and particularly from alternative schools like coding boot camps. 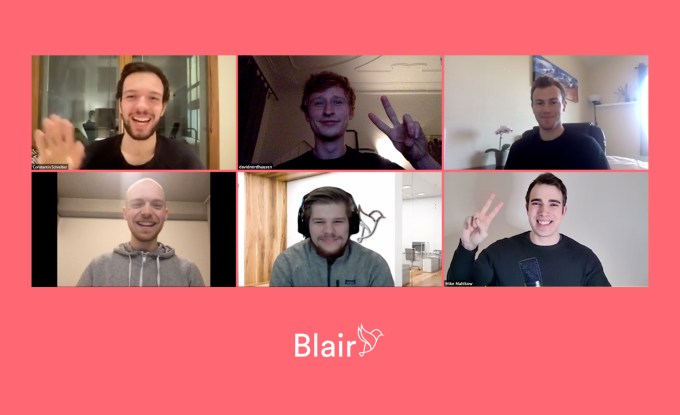 So Blair rejiggered its platform (now dubbed Blair Servicing) away from D2C lending to being a technology servicing layer for schools offering ISAs as part of their programs. From there, it constructed Blair Capital, this new $100 million facility which can be used by its partner schools to fund their own ISA programs. That means these schools won’t have to raise their own debt capital for their ISAs if they don’t want to.

Unlike Blair’s original approach focused on consumers, underwriting for ISAs is now based on the quality of an individual school, and even more specifically an individual program. So rather than underwriting a person, Blair knows that certain programs have a given return profile and can underwrite terms of the ISA to fit that risk.

Terms can vary widely between programs. Mahlkow explained that the company more or less has merely floors and ceilings on terms but otherwise is flexible. For instance, the company won’t do income shares above 20% (and often gets queasy even going near that number), and there are repayment caps and limits on repayment time periods as well, with most ISAs it offers being between 1-2 years or a maximum of three years.

Alternative schools with track records of student achievement can use Blair Capital right away. For newer schools without the same operating history, Blair will help guide those schools to build the early track record they need so that the company can underwrite their ISAs in the future. Either way, all schools can use Blair Servicing to handle their loans. 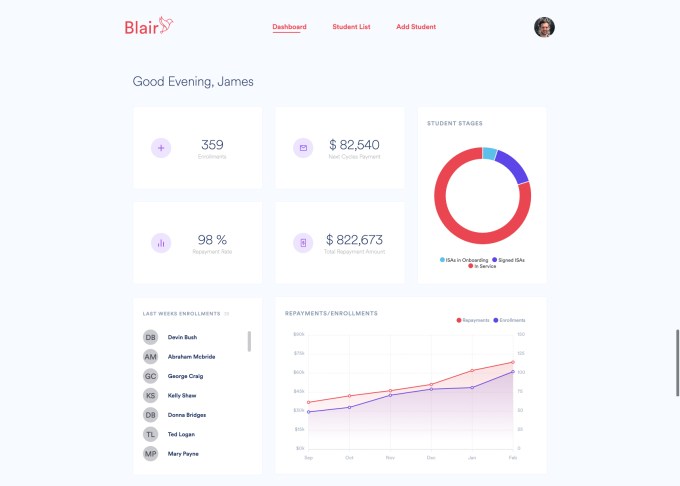 The school dashboard within Blair Servicing. Photo via Blair.

Blair Servicing takes a percentage fee of the money that flows back from an ISA after graduation, while Blair Capital takes an origination fee plus joins in the upside of the ISA itself. The goal is to incentive-align the loans for all parties involved.

The company, which is based in SF, remains lean, at six employees. With $100 million capital to fund ISAs though, it hopes to have an outsized impact on this burgeoning industry.