The Venmo mobile payments app is going to look very different in 2021 as it inches closer to neobank territory with expansions into budgeting, saving and cryptocurrency, said Venmo parent company PayPal, during its fourth-quarter earnings on Wednesday. The company also plans to put its $4 billion Honey acquisition to work by integrating its suite of shopping tools into the Venmo app, including merchant offers, deals, price tracking and wish lists.

PayPal already signaled its intentions to bring cryptocurrencies to Venmo. The company entered the crypto market last November by adding support for buying, holding and selling cryptocurrencies in the U.S. through a partnership with the regulated crypto services provider, Paxos Trust Company. At the time, PayPal noted it would bring a similar feature set to its Venmo app during 2021.

That time frame is still on track, PayPal confirmed during its earnings call with investors.

The company said, in the next few months, Venmo users will gain the ability to buy, hold and sell crypto inside the Venmo mobile app, along with other “investment alternatives.” (This statement refers to PayPal’s work with central banks who are developing their own digital currencies on the blockchain.)

Other changes to Venmo make the app sound as if it’s becoming more of a neobank competitor.

For example, PayPal said it will work with its financial industry partners this year to introduce features like budgeting and saving tools as well as bill pay options inside PayPal — additions that are common to modern-day mobile banking apps.

On Venmo, the forthcoming savings feature will look similar to PayPal’s existing PayPal Cash Plus account, where it partners with financial institutions to provide FDIC pass-through insurance. Today, funds held in the Cash Plus account are eligible for this insurance only if customers also have a PayPal Cash Card debit card, have enrolled in Direct Deposit or have established Goals in their Cash Plus account. Venmo now has the pieces in place to offer the same.

Another change includes the Honey integration, which PayPal has been promising for some time. Now, the company is offering more details around what those integrations will look like. It said the plan is to integrate Honey’s features into both its PayPal and Venmo platforms in the first half of 2021 — including Honey’s wish list, price monitoring tools, deals, coupons and rewards.

This integration will allow merchants to target specific demographics of PayPal and Venmo customers with personalized offers and discounts, thanks to PayPal’s two-sided marketplace. In other words, the company will attempt to capture the consumer in the earlier stages of the shopping process, when they’re browsing for deals, looking up prices or searching for specific products. Honey’s shopping tools could point them to a matching deal, and then the customer could complete the checkout process using the Venmo app.

These new tools will arrive at a time when the pandemic has forced more commerce to shift online, as retail stores and other in-person retail opportunities declined due to store closures and government lockdowns. Plus, some people today now just prefer to shop online because they no longer feel safe in physical retail stores where basic safety measures like mask-wearing and social distancing aren’t enforced.

This broader acceleration of e-commerce and “contactless” payments also helped PayPal to add 1.4 million new merchants in the quarter. It now has 29 million merchants across its platform, who interact with nearly 350 million consumers.

Meanwhile, Venmo’s total payment volume grew 60% year over year to $47 billion, and its customer base grew 32%, ending just shy of 70 million accounts. The company expects its revenues will approach $900 million in 2021. 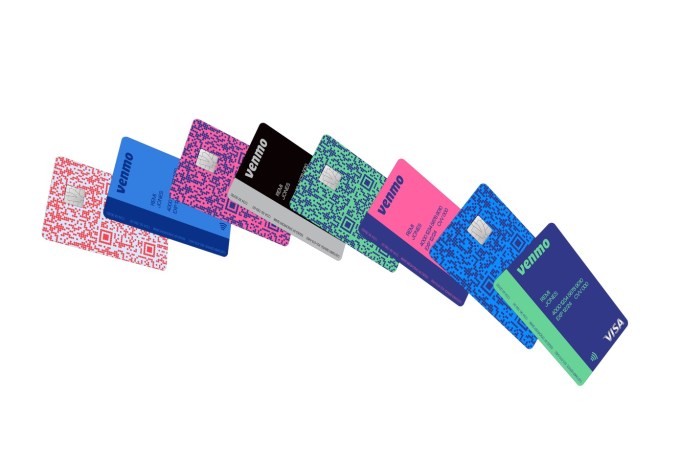 Venmo has been rapidly expanding beyond being just a payments app. In recent months, it has launched its first credit card, which will be 100% rolled out by month-end, as well as QR codes for in-store shopping, business profiles and cash-checking features that arrived just in time to handle customers’ stimulus checks.

But Venmo doesn’t aim to be a full neobank — at least not yet. Instead, it imagines itself as more of a “digital wallet” of sorts.

“Today’s digital reality is rapidly accelerating the need for a digital wallet that encompasses payments, financial services and shopping,” explained PayPal CEO Dan Schulman, speaking to investors. “This year, our digital wallet will change more than it has ever changed before, significantly increasing its functionality within a single, integrated and beautifully designed app that should meaningfully increase consumer engagement,” he said.

As Venmo’s new features roll out, PayPal expects the app’s usage and payment volume to grow.

“I think we are going to see … a real bend in the historic rate of engagement. And it’s going to be all around that super app functionality in that digital wallet, moving well beyond just payments,” Schulman said.

Correction, 2/4/21, 1 p,m. EST —  Schulman’s note about bill pay was referencing a launch inside PayPal’s app in 2021. It was mentioned alongside other forthcoming Venmo features, which led to some confusion. We’ve now corrected this.