If you were itching to launch an email newsletter via Twitter following its acquisition of the Dutch newsletter platform Revue last month, you’ll have to wait a bit longer for a fully featured integration. But Twitter has quietly added a newsletter link to its web app — pointing users of its social network to the publishing platform.

The company told us the two platforms remain separate for now — meaning those wanting to sign up for a Twitter-owned Revue newsletter can still create a separate (Revue) account to do so (albeit, Revue does also offer a sign-in via Twitter option). So it’s the first baby step on the path toward any future, deeper integration.

Twitter confirmed it’s reverted Revue’s Publisher offer back to private beta for the moment while it concentrates on investing in platform infrastructure to pave the way for expected future demand.

The paid tier will offer more advanced features such as the ability to manage multiple newsletters and customize themes.

Twitter was unable to provide a timeline for when that tier of newsletters will be open for new sign-ups again. But it said it’s still possible to create a paid newsletter under the free newsletter tier via Revue’s platform.

One change it has made already is to lower the fee Revue takes for paid newsletters — to 5%.

It also told us it’s merged the original Free and Pro tiers that Revue had been offering prior to the acquisition — meaning the free Revue tier is now a little more fully featured.

The addition of a link to “Newsletters” in the “More” tab of Twitter’s web app was spotted earlier by a few eagle-eyed users — including our very own editor-in-chief, Matthew Panzarino.

If you click on the Newsletter link it leads to a pop-up encouraging Twitter users to set up a free newsletter to reach their audience, flagging features such as the ability to embed tweets, import email lists, analyze engagement and earn money from subscribers.

A big “Find out more” button links through directly to Revue’s platform. 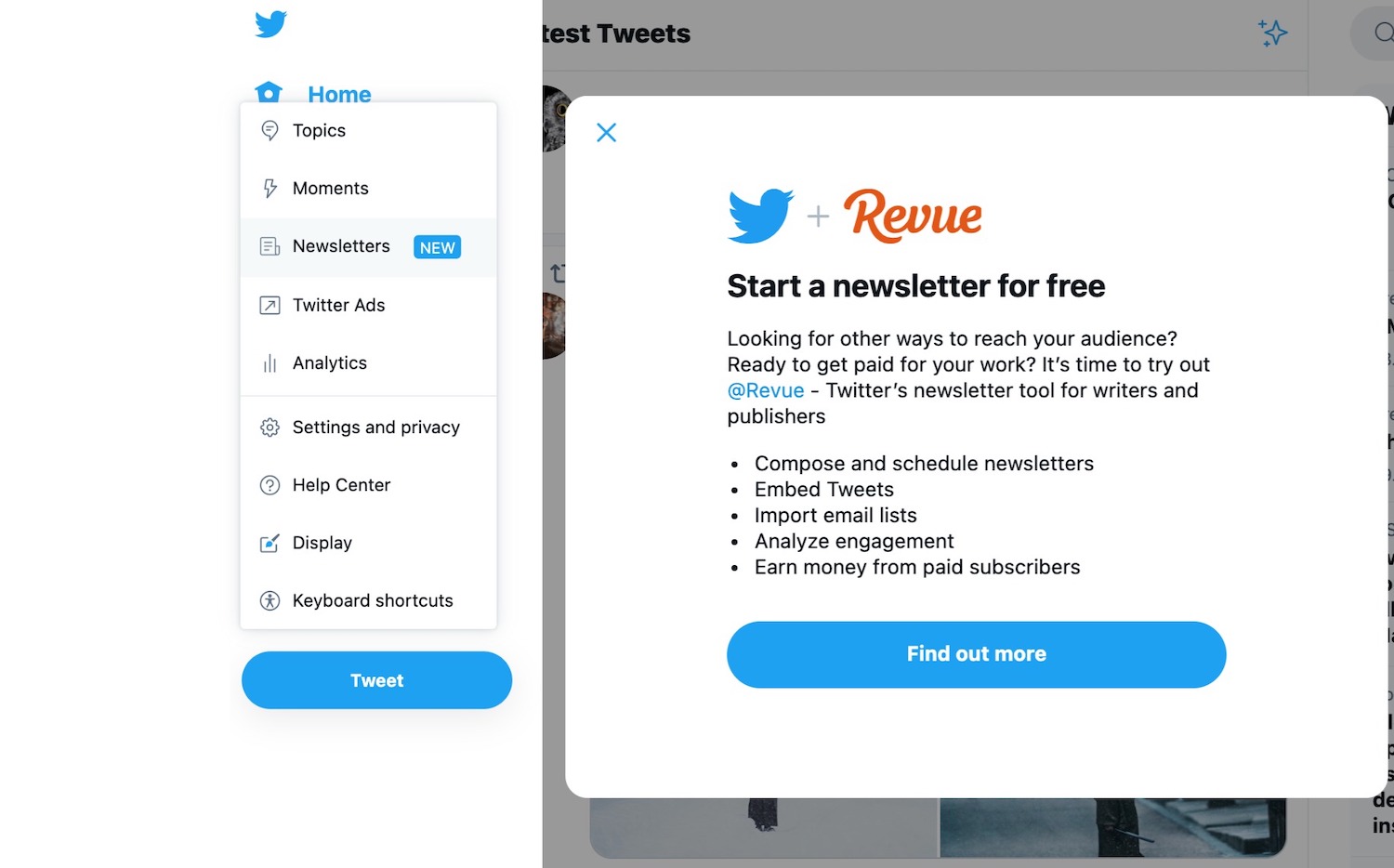 Unless you’ve been on a very long digital detox you’ll have noticed that newsletters have been having quite the moment of late. The rise of platforms that help writers monetize their content via an email-delivery format presents a clear risk/opportunity to Twitter, a company that relies on an army of users freely and publicly contributing short-form content.

But with Twitter launching its own in-house newsletter, tweets can potentially inflate in value — becoming the top of the funnel for Twitter users to build a community of followers who they made be able to convert to paying subscribers for longer-form content, delivered in a newsletter format.

Twitter told us it has put on ice new sign-ups to the paid Revue tier so it can focus on improving infrastructure to effectively meet the demand of new customers and make Revue an even more powerful tool for publishers.

It added that it’s working quickly to roll out a new version of the paid Publisher tier of the newsletter tool that’s open to new customers, pointing to a mailing list for interested parties to sign up to get the latest updates (here).

Twitter is already working on integrating newsletters on its site, following Revue acquisition

Last month we reported Twitter had been spotted working to integrate the newsletter into its platform, so it appears to be moving at a clip to get Revue plugged in and capitalize on the hype and momentum around paid newsletters. Albeit, it’s prioritising infrastructure investment over any deeper integration for now — and told us it’s still brainstorming how that might work in practice. So it sounds like there’s a way to go.

Preventing Twitter users from finding a home for their longer-form thoughts elsewhere is likely front of mind for Twitter — as competition for attention in the social sphere heats up, such as from the likes of (rival) newsletter platform Substack (which has been building momentum since 2017); and buzzy live-voice chat app Clubhouse (which has recently captivated the clique-loving technorati).

The current integration on Twitter’s web app can be found under the three-dot “More” menu option in the sidebar — which brings up a prompt to “Find out more”.

Twitter noted that features it flags up there — such as the ability to drag and drop tweets to embed them — were already offered by Revue.

The Revue newsletter platform, which competes with, among others Andreessen Horowitz-backed Substack, maintains integration support for a number of third-party services, including Facebook, Instagram, Pocket, Product Hunt, Instapaper and even RSS feeds. Once users have integrated these services, they can drag and drop stories from those feeds to the newsletter.

In the current avatar, users can manually add email addresses of subscribers, or import a list from Mailchimp or a CSV file. On the welcome screen, which noted reverse engineer Jane Manchun Wong first spotted last week, Twitter also advertises that its newsletter can help writers and publishers earn money from paid subscribers.

It remains to be seen what additional features Twitter will be bringing to the platform.

We imagine a number of integrations on Twitter that will help readers more easily discover and connect with writers — from easy ways to subscribe to a newsletter to new settings for writers to host conversations with subscribers.

This report was updated with a number of corrections after we received additional information from Twitter to clarify that the web app integration only extends to displaying a shortcut in the tab at this point. The two platforms remain separate — so any deeper integration is yet to come.