Nathalie Walton almost didn’t become a mother. Her risky pregnancy caused her placenta to burst during childbirth, almost killing her and her son last year. Walton, who feels lucky to have survived, says the haunting experience made her an example of a reality she had long known: To be a pregnant Black woman is to be at risk, regardless of economic background.

The stress of her pregnancy led Walton to download Expectful, a meditation and sleep app for new mothers. She recalls stabilizing, emotionally and physically, within a week, bringing an otherwise “soft landing” to a volatile pregnancy.

Weeks after delivering her son, Everett, Walton just so happened to hear of an advisory role opening at Expectful. Even though she was mid-maternity leave from her managerial role at Airbnb, she jumped at the opportunity.

“I definitely had a full-time job, I had a newborn baby,” Walton said. But, she says, it was an opportunity to be entrepreneurial in a sector she cared about. Even if it was just for a few months.

And now, Walton is the chief executive of the company. The business is pivoting its product strategy to grow beyond recorded meditations. Walton helped it raise its first millions in venture capital, making her one of the few dozen Black female founders to do so. New financing and the boom of the mental health focus amid the coronavirus pandemic puts Expectful in a coveted spot. And it puts Walton, who is at the helm of a company for the first time, in a pressure-cooker spotlight.

Even in the world of startups, going from user to chief executive in less than a year is a remarkable feat. But it’s not one that she rushed.

Walton graduated from Georgetown and immediately joined the New York banking world. After a few years as an analyst at JP Morgan, though, she became unsatisfied with the work.

“I think I had a quarter-life crisis,” Walton said. Searching for new opportunities, she ended up at a prospective students day at Stanford University in what would become a pivotal moment in her life.

“For the first time, I met entrepreneurs and saw an actual concept that you can pursue a career you like, be successful and make a difference in the world,” she said. Walton eventually applied, and got accepted, to Stanford Graduate School of Business (GSB), a prestigious program that produces founders and top executives. It was then that she realized she wanted to be a chief executive one day.

“I admired them, but I just didn’t see the pathway for me to get there,” she said, of the entrepreneurs she met, who were then largely white and male. “I didn’t have the confidence.”

So, she set that hope aside and pursued intrapreneurship, which would let her join a stable organization and act as a mini-founder within it. Employees in this role are tasked with building a startup within a startup, whether that is rooting an innovative idea or leading an experiential team. Corporations have long embraced this idea to bring momentum to otherwise red-tapey processes.

Walton joined eBay and soon rose to work as the head of business operations and development. Her work helped the company break into 3D printing.

Over the years, this has been the defining characteristic of Walton: join an organization, build a scrappy idea from scratch, and then do it all over again. She has held roles in Airbnb and Google that all required her to have the agility of a founder convincing people on a moonshot vision, and the rigor of a manager who can get a deal done.

She had the same vision heading into an advisory role at Expectful. But when Walton landed a key Expectful partnership with Johnson & Johnson, then-CEO and founder Mark Krassner had an idea.

Before starting Expectful, Krassner experienced the benefits of meditation firsthand. He also saw his mother face depression, which made him realize how meditation could have a positive impact on others. After seeing research that showed how meditation could positively impact a pregnancy, he began thinking of a solution in this cross-section. He eventually started a course on Teachable, a startup that lets anyone create and monetize an online class, with 15 moms and a guided meditation.

Over time, the idea stuck. Krassner eventually turned his course into a 12-person startup. Under his leadership, Expectful grew to profitability and over 13,000 paid users. Its conversion rate from free to paid users was five times higher than industry standards, the company claims.

That said, from the moment Mark Krassner started Expectful, he knew he was an unlikely founder. He doesn’t have any children, so leading a meditation and sleep app for new mothers comes with its own hurdles.

“As a male founder with no kids, it was on my mind from day No. 1,” Krassner said. He eventually wanted to put a female at the head of the company, he says. Walton was the obvious choice.

Walton returned to Airbnb after her maternity leave right as Airbnb had aggressive COVID-19 layoffs. While her job was saved, her team disappeared as part of the cuts. She started looking for jobs, and received lucrative offers from Facebook, Apple, Google and Amazon. When she told Krassner she was leaning toward a lead product manager position at Amazon, he replied with an offer to take over Expectful’s entire business.

“I think it caught her off guard,” Krassner said, who is still a board member at the company. “Usually you don’t think a CEO is looking for [a new CEO] unless things are going to hell in a handbasket.”

Expectful began as a guided meditation library, which will continue to be its core. But now, Walton wants to take advantage of that momentum and evolve the company into a “go-to wellness resource for hopeful, expecting and new parents.”

The language suggests that the startup is evolving in how it markets itself. Right now, the site has a number of references to “motherhood” and women. But Walton says Expectful defines a mother by anyone who identifies themselves as one. While the startup primarily has content geared toward the gestational parent, or the one who gives birth to the child, Walton says they have a “a partner’s library for non-gestational parents that identify as non-gestational mothers, fathers, or however they choose to identify.”

Walton plans to pivot the startup in three phases: content, marketplace and community.

For content, Expectful wants to organize pregnancy-related information. Currently, a lot of information or advice around pregnancy lives in books or in-person classes. But the learning experience, which Walton says is similar to middle school-style lectures, doesn’t feel built for this century.

The next step in her plan is digitizing the service providers that help women through pregnancy. In simpler words, replace the disorganized recommendations in Facebook groups for parents.

“When I went to ask my OB-GYN for recommendations for a doula, she gave me a sheet of paper with the names of 10 doulas,” she said. “You have to text the doula, ask them questions and if they want to meet up — it all feels yucky.” Expectful wants to put all that information in one platform so moms can access tips and recommendations from the ease of their homes.

The end-product here would be a peer-reviewed platform that can help a mom find everything from a therapist to a live-in nanny, with reviews built-in. 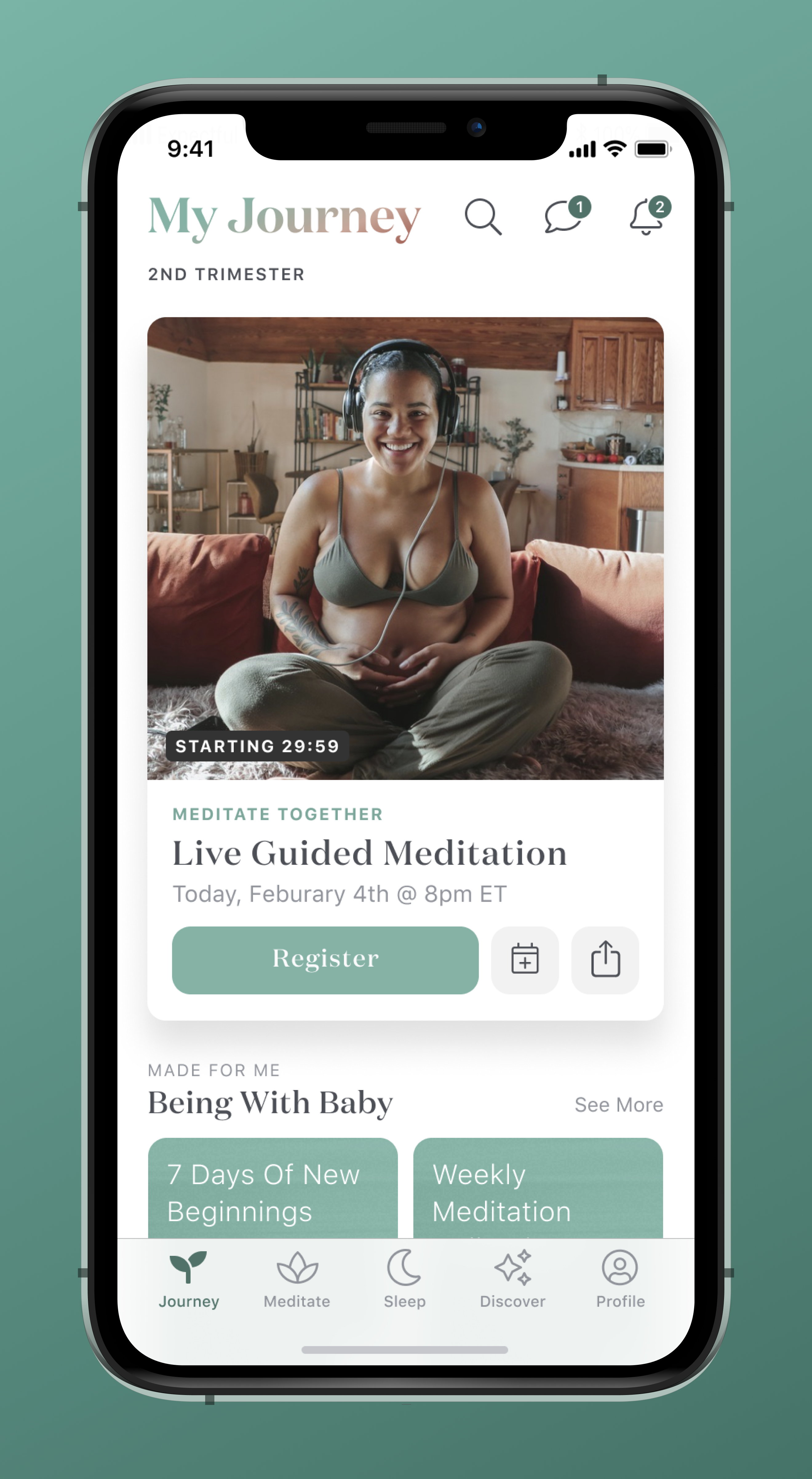 Part of Walton’s focus through all of these priorities is to invest in Black maternal health outcomes. Her own experience, she says, showed her how even a “Stanford-educated wellness junkie” such as herself can be at a high-risk for pregnancy because of her skin color.

It’s a lofty goal, even with the promising growth and strong library of guided meditations. The competition is steep. One of Expectful’s closest competitors is Peanut, a social network for moms used by over 1.2 million people. Mahmee, a digital support network for postpartum mothers, has raised $3 million and views itself as complementary to Expectful. Headspace has launched its own motherhood meditation series, but it is not as comprehensive as Expectful’s.

“I think we’re able to connect with women in a way that some of these other companies aren’t,” Walton said. “People are paying for the service, so they clearly need it.”

While Walton declined to share new user metrics, she said that the company’s revenue has grown 100% since March 2020.

Long-term, Expectful wants to mimic Peloton’s playbook in terms of getting premium content and community to the right audience. Still, growing from a startup to a venture business requires more than just ambition and market fit. It requires the ability to exponentially grow and keep growing.

“Historically when I look at what black women raise fundraising, I feel fortunate that I’ve been able to raise this round,” Walton said.

Harlem Capital founding partner Henri Pierre-Jacques said that “obviously, given our focus we weren’t going to invest in a white male.” Walton’s “founder-market fit” is what made the firm invest, even with the hairy dynamic of an exiting CEO.

Mayer, head of communications at Glossier, was the one who introduced Walton to the woman who told her about the advisory role of Expectful. She says that Nathalie’s “path to entrepreneurship feels inevitable.

“It was always just a question of finding the space where her passions collided,” Mayer said.

As a new mother and new founder, Walton has had a busy balancing act of a year.

“I’m working more now than I have really in the last decade,” she said. “But I’ve never been more fulfilled because, as someone who went through this, and I’m still going through this, I feel so personally the level of pain that so many women suffer through.”