Google has updated and broadened its Play Store policy on gaming loyalty programs to help developers better understand the practices that are permitted, months after confusion about the guidance prompted some backlash in India, the biggest Android market by users.

The company said on Thursday that it now specifies guidance on gamified loyalty programs that are based on a qualified monetary transaction in an app and offer prizes of cash or other real-world cash equivalent perks.

Paytm, which is India’s most valued startup, had alleged at the time that Google was preventing the startup from engaging in the very same set of practices that the company’s own app, Google Pay, was employing to win users in the country. Google had temporarily delisted Paytm app from the Play Store after the violation.

This back and forth between the two firms, as well as changes to Play Store commission in the following weeks, gave birth to a coalition of Indian startups that has sought government intervention to regulate the power Google holds in the country.

“App developers in India are actively building uniquely Indian features and services. One example is the use of mini games, quizzes and other gamification techniques to delight users and convert them into loyal customers. These experiences are often launched during important festivals and sporting events, and getting it right within the specific time window is critically important,” wrote Suzanne Frey, Vice President, Product, Android Security and Privacy, in a blog post.

The company still does not permit real gambling apps in India, but said developers globally now will have better clarity on rules so they can inform their strategies.

“This is one of the things we discussed when we spoke to several startup CEOs in India and around the world in the past few months. And, as part of the very first policy update of 2021 we are clarifying and simplifying the policies around loyalty programs and features,” wrote Frey.

A Google spokesperson told TechCrunch that the company will be outlining the full guidelines later today.

Update: The company has published the new guidelines. It’s now allowing daily fantasy sports apps in the U.S. and several other countries (not India), but such apps will not be permitted to use Play Store billing. The changes go into effect March 1. 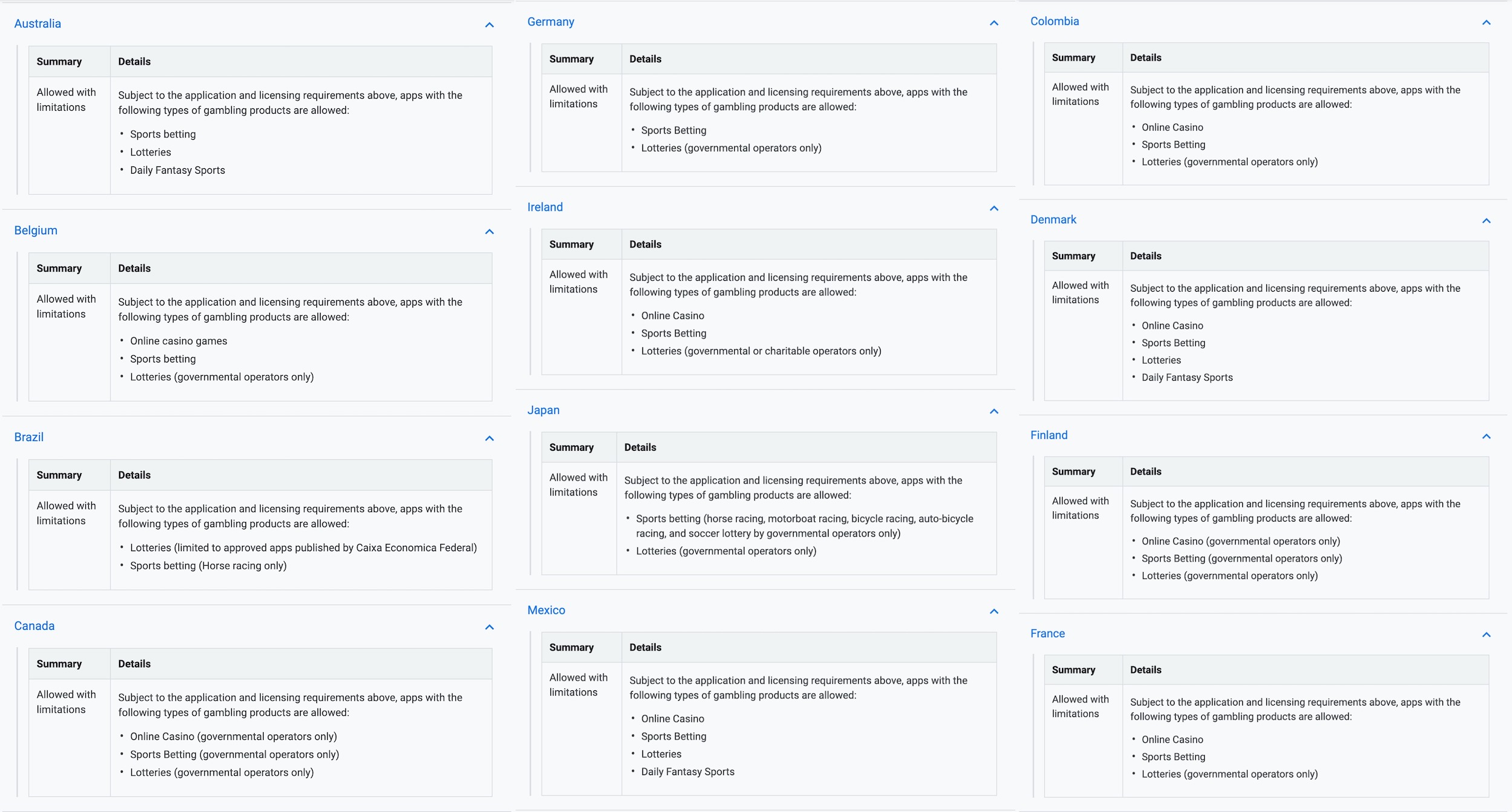 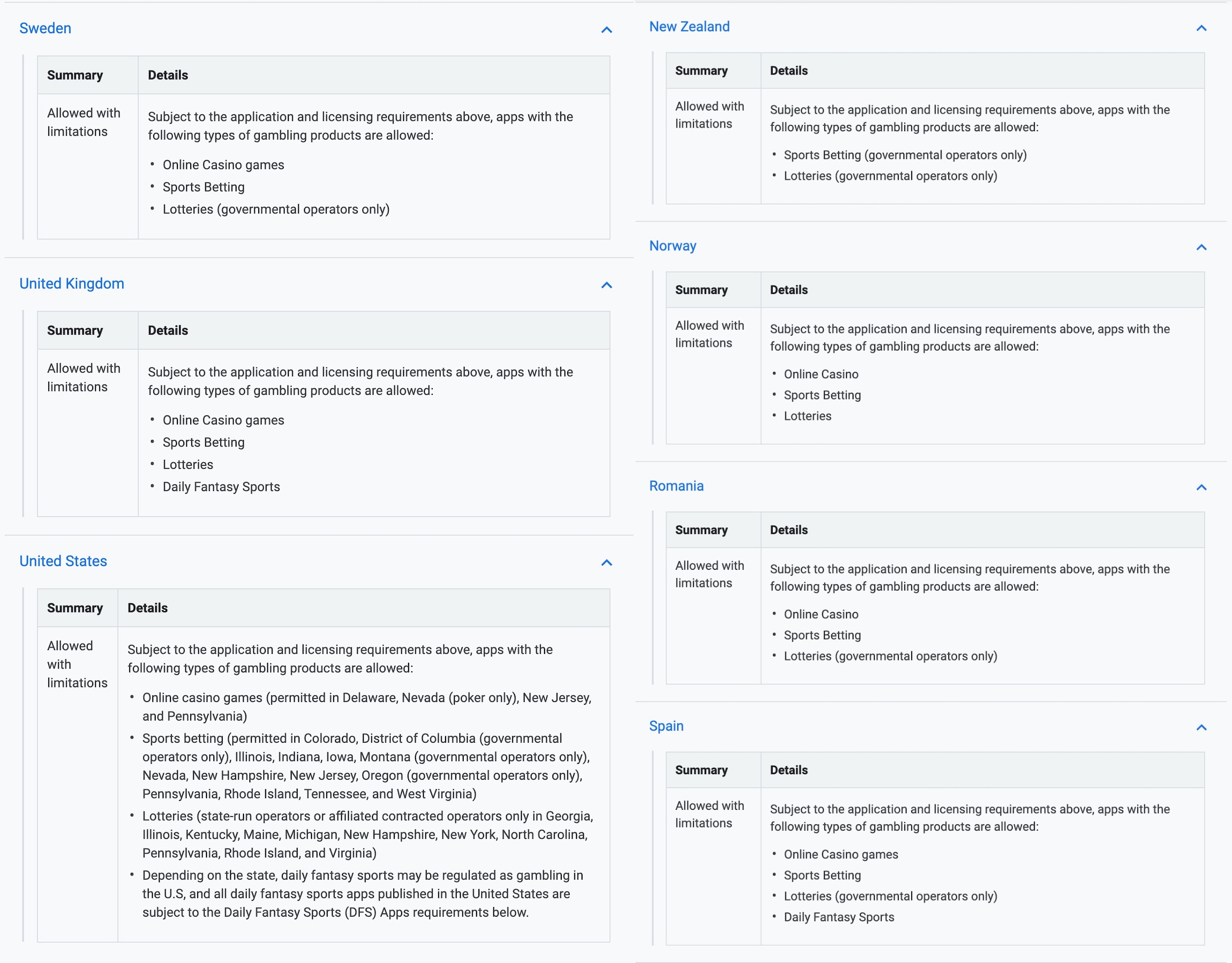 As part of the update, the company said it is also launching How Google Play Works, a repository of useful information and best practices to help developers. “It also contains India-specific details on programs that local developers can leverage to find success and scale. For users, this site helps to demystify key aspects of the Google Play platform, and explains how user security and protection remains at the heart of everything we do,” wrote Frey.

In a virtual event on Thursday, Sameer Samat, VP of Android and Google Play at Google, said today’s update is the first of many the company plans to issue this year and it is committed to listening to more feedback from the industry.

In a wide-range discussion at the event organized by startup network TiE Delhi-NCR, Samat also talked about the efforts Google is putting into bringing Android-powered smartphones to more people in India. Last year, Google announced an investment of $4.5 billion into Indian telecom operator Jio Platforms. As part of the partnership, the two firms have said they will work on low-cost Android smartphones.

“While India is the fastest growing smartphone market in the world, there are a lack of devices priced in a certain range that prevents a number of consumers from purchasing,” he said. “We have been optimizing Android for entry level devices with Android Go. The point of that project is to enable Android to run on entry level hardware that hopefully brings the price down. There are more than 100 million Android Go smartphones in the market today, but we need to go further than that.”

Samat said the company is trying to bring the set of services that higher-end smartphones feature to “entry-level” handsets it is building with Jio Platforms. “More affordable phones cannot mean lower quality phones.” He suggested that these phones will have a different consumer interface that is directly aimed at users who have not previously used a smartphone.