TikTok has a vaping problem. Although a 2019 U.S. law made it illegal to sell or market e-cigarettes to anyone under the age of 21, TikTok videos featuring top brands of disposable e-cigarettes and vapes for sale have been relatively easy to find on the app. These videos, set to popular and upbeat music, clearly target a teenage customer base with offers of now-unauthorized cartridge flavors like fruit and mint in the form of a disposable vape. Some sellers even promote their “discreet” packaging services, where the vapes they ship to customers can be hidden from parents’ prying eyes by being placed under the package’s stuffing or tucked inside other products, like makeup bags or fuzzy slippers.

Interest in flavored, disposable vapes that appeal to teens and young adults, in particular, has been growing in the wake of the FDA’s Juul crackdown.

In February 2020, the FDA first began to take enforcement action against illegally marketed e-cigarette devices, including those offering flavors besides tobacco or menthol, as well as those targeted towards minors — an action that was designed to target Juul.

As a result, disposable vapes like Puff Bar were adopted by some young people who were still in search of flavors like bubblegum, peach, strawberry and others. These cheaper disposables were easy to find, and continued to be available at convenience stores and gas stations.

But they’re also all over TikTok, ready to be shipped with anyone with a way to pay.

What’s more, when this content is reported to TikTok, it’s not always taken down.

TechCrunch found vape sellers marketing on TikTok who have been using the app to communicate with customers through both videos and comments. They also direct viewers to what appear to be illegally operating websites. Their TikTok videos often show off the seller’s current inventory of vapes, including disposables like Puff Bar in teen-friendly flavors.

Essentially, the sellers are using TikTok as a way to create vape advertisements they don’t have to pay for that are capable of reaching young consumers — an audience whose interest in vaping hasn’t necessarily declined because of the FDA’s action.

According to nonprofit tobacco control organization Truth Initiative’s latest study, use of Juul decreased between 2019 and 2020, but it remains the most popular e-cigarette brand among 10th and 12th graders who were current vapers at 41%. The report also found that disposable products such as Puff Bar (8%) and Smok (13.1%) have gained during this time.

“Taken together, the 2020 National Youth Tobacco Survey (NYTS) and the new e-cigarette sales data report illustrate how the current federal policy enabled youth to quickly migrate to menthol e-cigarettes (especially Juul menthol pods) when mint-flavored products were removed from the marketplace, and for inexpensive, flavored disposable e-cigarettes such as Puff Bar to soar in popularity,” Truth stated in September 2020.

“With kid magnet names like cotton candy and banana ice, the market share of disposable products nearly doubled in just 10 months from August 2019 to May 2020,” it said.

The scale of the problem on TikTok is also significant.

Today, U.S. teens account for an estimated 32.5% of TikTok’s U.S. active users, according to third-party estimates published by Statista. The company has around 100 million monthly active users in the U.S., it said last year.

Meanwhile, videos tagged with popular vape and e-cigarette brands and keywords have racked up hundreds of millions of views.

For example, the hashtag referring to leading vape brand Juul (#juul) has 623.9 million views on TikTok, as of the time of writing.

The hashtag #puffbar, referencing the brand Puff Bar, the maker of a single-use vaping product with Chinese origins, has 449.8 million views. Other brands’ names appear in hashtags, as well. Videos tagged with #njoy have 55.3 million views, #smok have 40.1 million views, and #Vuse, which is a British Tobacco brand, have 5 million views. (*Note that some “njoy” content is related to the slang for “enjoy,” while others are vape-related videos.)

These are just the views associated with these specific hashtags. For every search, there are multiple variations. For instance, #puffbars, #puffbarplus and #puffbardealer have 66.8 million views, 9.6 million views and 8.9 million views, respectively.

Not all these hashtags are associated with vape or e-cigarette sellers, but demonstrate there is a sizable amount of vape-related content on the app. For example, tags like #juulgang (590.4 million views) have become popular enough that anti-vaping content creators have adopted them as a means of counter-programming against vaping content.

These trends are particularly concerning given the large, young demographic that uses TikTok. A third of its U.S. users may be 14 or under, in fact.

In the U.S. App Store, TikTok is rated for ages 12 and up and on Google Play, its content rating is “Teen.” But while TikTok has modified the default privacy settings for young people’s accounts and has been quick to block other controversial hashtags in the past (like those around U.S. election conspiracies), it has allowed vaping-related content to remain easy to find.

In addition to the popular vaping hashtags prevalent on TikTok, we uncovered numerous vape sellers operating under obvious account names such as “@puffsonthelow,” “@PuffUniverse” and “@Puffbarcafe,” for example. Their pages were filled with vape videos boldly marketing their current selections, hashtagged with vape-related terms like #puffbarchallenge, #puffplus, #vapetricks and others.

In some cases, we found vape sellers had even tagged their videos with #kids and other trending tags.

Knowing that their target market is often teenage vapers, many videos depicted how the seller could package the vape inside another product or hide it in the stuffing so parents wouldn’t find out. We saw videos of vapes packaged underneath candy, inside makeup bags, inside socks, underneath other lager products, and more.

Through links published to the account’s profile or referenced in the videos, TikTok users are redirected to the sellers’ websites or even Discord channels where they would only sometimes be presented with an age verification pop-up.

Often, they could just add items to a basket and check out. Many sellers also directed their customers to pay using PayPal, Venmo and/or Cash App, instead of accepting standard credit card payments.

None of this is legal, according to the Campaign for Tobacco Free Kids, a leading American nonprofit focused on reducing tobacco consumption, particularly among youth.

“It’s illegal to market these products or to engage in marketing that appeals directly to anybody under the age of 21,” Matt Myers, the president of the Campaign for Tobacco Free Kids, told TechCrunch. “And it’s illegal to actually conduct a sales transaction without age verification.”

Plus, he adds, clicking a box on a website that says “I’m over 21,” does not qualify as a legal age verification for making these sales.

The FDA hasn’t issued specific guidance around online retail, but the law is clear that checking IDs is required to ensure retailers aren’t selling to underage users. That’s not happening with a pop-up box, and often there’s no box at all.

In addition, the FDA reminded TechCrunch that Congress recently established new limits on the mailing and delivery of e-cigarettes and other tobacco products through the United States Postal Service and through other carriers, which should limit access to these sorts of products through online retail purchases.

Myers, however, points out that the current FDA guidelines have made enforcement of this sort of “social” vape marketing more difficult than necessary.

“The images you’re seeing, the use of influencers, and the kinds of offers you’re seeing are governed by a federal standard by the FDA, which is very broad and very general,” Myers says. “The FDA’s failure to articulate clear, specific guidelines means that everyone is in a constant what I call ‘whack-a-mole.'”

Enforcement, then, often depends on the FDA stepping in, which Myers says happens “on a very sporadic basis.”

“In many respects, the behaviors, the actions and the things you’re seeing do violate the law. But the mechanisms for implementing it that were put in place under this past administration are woefully weak and inadequate,” he says.

Another complicating factor is that public health groups — like the Campaign for Tobacco Free Kids, for instance — don’t have a relationship with TikTok, as they do with other social networks.

Over the last couple of years, over 100 public health groups came together to ask leading social networks like Facebook, Instagram, Twitter and Snapchat to clamp down on tobacco-related content and the use of influencers in marketing. As a result of these efforts, Facebook and Instagram implemented new rules to prohibit social media influencers from promoting tobacco-related products and developed algorithms to pick up on that sort of content.

Overall, the health organizations have reported seeing a reduction in tobacco and vape content on top social platforms, but these efforts have not yet included TikTok.

The Campaign for Tobacco Free Kids has not given TikTok a comprehensive review, Myers admits, due to the app still being relatively new.  But from what the organization has seen so far, TikTok is of growing concern.

“We’ve seen some of the most egregious marketing, use of influencers, direct offers of sale to young people [which] appear to be gravitating over to TikTok,” Myers says. “And we don’t see any evidence that TikTok has actually done anything.”

TikTok can’t claim ignorance of the problem, either.

When a vape seller who unabashedly advertised “no ID check” was reported to TikTok through its built-in reporting mechanism, TikTok’s content moderation team said the content didn’t violate its guidelines. This same response was given when other vape sellers were reported, as well. (See below.)

TikTok claims this shouldn’t be happening. The company told us that it will remove accounts dedicated to posting vaping or e-cigarette content as soon as it becomes aware of them, and will reset account bios that link to off-platform tobacco or vaping sites.

It also says its Community Guidelines prohibit content that suggests, depicts, imitates, or promotes the possession or consumption of tobacco by a minor, and content that offers instruction targeting minors on how to buy, sell, or trade tobacco. And it doesn’t permit tobacco ads. 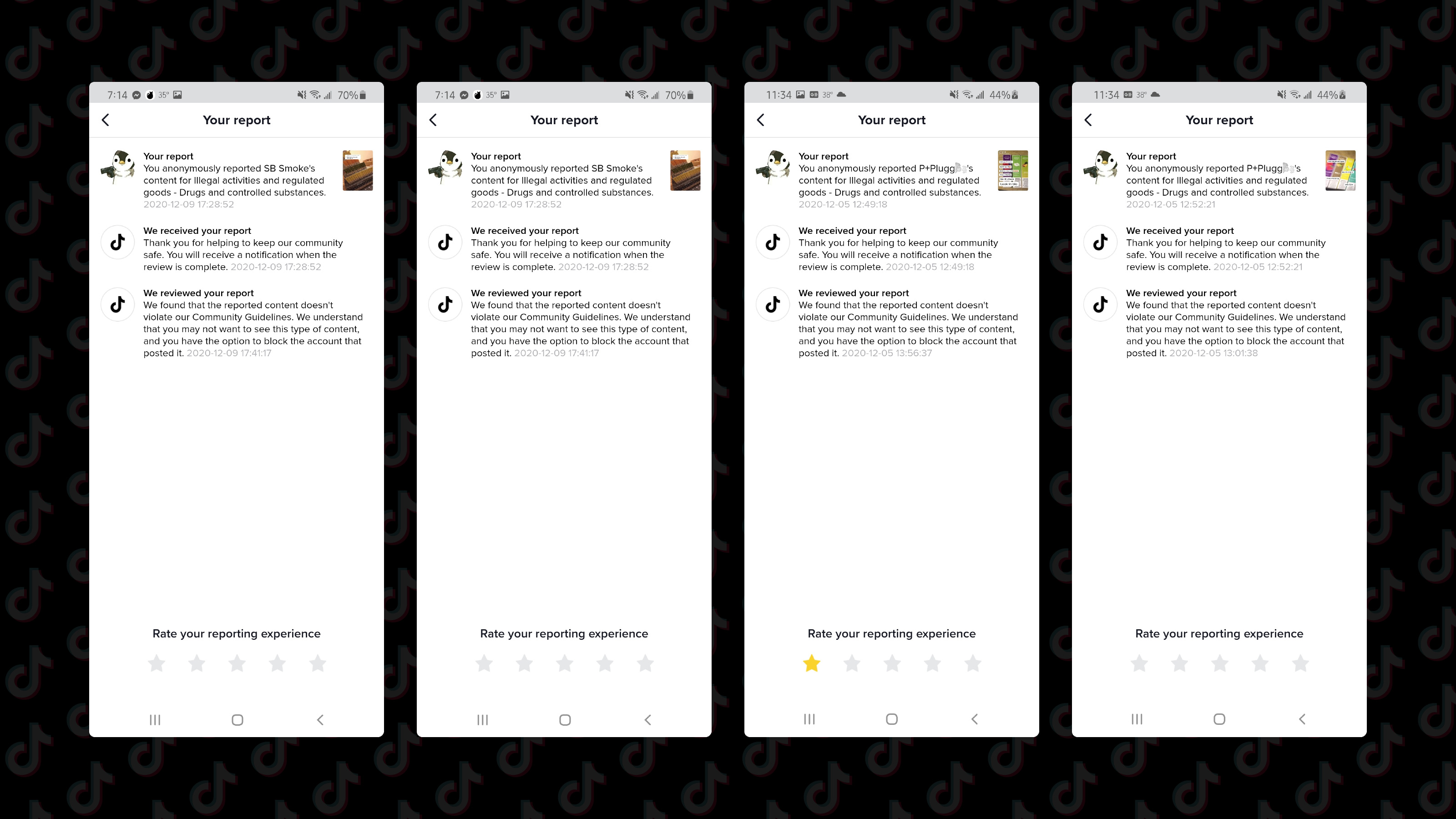 Reached for comment over whether it was aware of the problems on TikTok, an FDA spokesperson said it does not discuss specific compliance and enforcement activities.

However, the spokesperson said the agency will closely monitor retailer, manufacturer, importer, and distributor compliance with federal tobacco laws and regulations and take corrective action when violations occur. In addition, the FDA said it conducts routine monitoring and surveillance of tobacco labeling, advertising and other promotional activities, including activities on the internet.

What’s been making matters more confusing is that the FDA has been accepting premarket applications for flavored vape devices, but has so far refused to list which companies — Puff Bar or otherwise — may have filed for these. That means health organizations don’t know which products the FDA has under review.

But the Agency told TechCrunch that regardless of whether a premarket application has been submitted, it’s enforcing lack of marketing authorization for any product where the manufacturer “is not taking adequate measures to prevent youth access to these products.”

That statement would then include these online Puff Bar retailers and their TikTok marketing efforts.

The FDA added that it has taken action against Puff Bar, specifically, in recent days.

It sent a warning letter to Cool Clouds Distribution, Inc. d/b/a Puff Bar, last July, notifying the company that it was marketing new tobacco products that lacked marketing authorization and that such products, as a result, were adulterated and misbranded.

TikTok confirmed the activity we’re documenting is in violation of its guidelines and policies, but could not explain why there’s been such a disconnect between that policy and its enforcement actions.

“We are committed to the safety and well-being of our TikTok community, and we strictly prohibit content that depicts or promotes the possession or consumption of tobacco and drugs by minors,” a TikTok spokesperson told TechCrunch. “We will remove accounts that are identified as being dedicated to promoting vaping, and we do not allow ads for vaping products.”